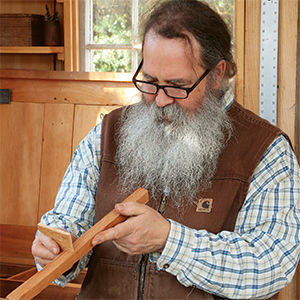 In the 17th century, relief carvings adorned furniture of all types from chests and chairs to cupboards and boxes. At the time, furniture makers, known as joiners, worked quickly and relied on only a few hand tools and sharp skills to get things done.

In this video, Peter Follansbee, a woodworker trained as a 17th century joiner, demonstrates relief carving techniques while building a box based on one made in Ipswich, Mass. around 1670. Watch as Follansbee creates the decorative S-scroll pattern with almost no layout tools, using mostly the curves of his gouges to guide the way.

“That’s just how that particular pattern was done,” Follansbee says of the S-scroll pattern. “Others use a compass, and some are completely freehand. But they rarely require more than half-dozen tools, and certainly not more than 10 tools.”

For the past 15 years, Follansbee has worked as a joiner at Plimoth Plantation, a living history museum that maintains a dozen or so houses dating back to 1627. Follansbee builds furniture for the houses and demonstrates woodworking techniques at the site’s period workshop. While the work he performs is true to the era, his tools are a few centuries more modern.  They include 19th century American carving gouges to others purchased out of the Woodcraft catalogue, Follansbee said.

For more information about the Plimoth Plantation, visit the organization online at Plimouth.org.