It makes a difference whether a plane blade's bevel faces up or down. Here's why.

The tip of a plane iron or blade is beveled on only one face, and handplanes can be classified based on whether the blade is mounted with the bevel facing up or down. Until recently, bevel-down planes were the rule. 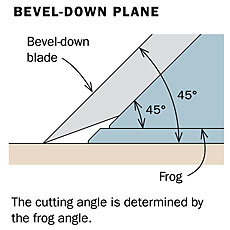 Only small block planes were bevel-up. Now, a variety of bench planes have this bevel-up configuration, which makes them more versatile. 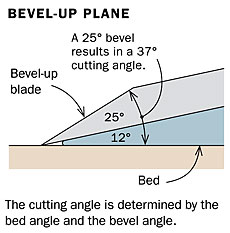 Here’s why: In a bevel-down plane, the blade (along with a chipbreaker, which attaches to it) rests on a frog—typically, a 45° bed screwed to the plane body. Because the bevel is behind the edge, the cutting angle is fixed at 45°. That’s a good angle for most tasks, but not for end grain or grain prone to tearout.

In a bevel-up plane, the bevel leads into the cut, contributing to the cutting angle. The bed is molded into the plane body at a low angle, usually 12°. So a bevel-up plane with an iron ground to 25° has an effective cutting angle of 37°. However, you can change that angle easily—by changing blades or grinding a new bevel angle on the existing blade.

This versatility makes bevel-up planes especially handy for working a variety of woods and/or grains. You can make the angle low for end grain and softer woods, steep for difficult grain in dense or highly figured woods, or medium for everything else. (See Handplane blade angles from FWW #186.)

All in all, bevel-up planes are more “woodworker friendly.” With fewer parts—no frogs or chipbreakers as on bevel-down planes—they are easier to set up and maintain. Their adjustable throat plates quickly set to the desired mouth opening to support the wood fibers and prevent tearout. (On bevel-down planes, you need to move the frog forward or back to change the mouth opening, a longer and trickier operation.) In short, their ability to work any grain situation makes bevel-up planes more versatile.

Sign up for eletters today and get the latest techniques and how-to from Fine Woodworking, plus special offers.
This site is protected by reCAPTCHA and the Google Privacy Policy and Terms of Service apply.
See all newsletters
X
X
Previous: Making Sense of Handplane Numbers Next: How to Put a Plane Down