A close look at price, performance, appearance, and smell.

Synopsis: We test 21 brands of wax to see which ones are best for furniture makers. Mark Schofield used the waxes to get a moderate sheen on cherry test boards finished with a washcoat of shellac and three coats of wiped-on polyurethane. He also tested the waxes on a mirror to see how easily they spread and buffed out. There wasn’t a substantial difference in the final appearance of the test boards in the end, but there were significant differences in the elbow-grease required, the odor, and the price.

On almost every piece of furniture I’ve made, the final step has been to apply a coat or two of wax. Nothing beats its slippery feel, the luster is just right, it hides minor imperfections in the finish, and hands down it is the easiest finish to work with. So when Fine Woodworking asked if I was interested in testing more than 20 different brands of wax, you’d think I’d have jumped at the chance. Instead I was a little skeptical. You see, although I’ve used a number of different clear and colored waxes, they never struck me as varying greatly in quality or ease of use, so I feared it would be as exciting as testing bottled water.

How wrong I was. After testing 21 brands of wax, I found that while the majority produce a good result, the effort required varies enormously. You can get excellent waxes for a modest cost, but there are a few that I wouldn’t use again at any price.

While you can use wax on bare wood or wood that has only a thin penetrating finish, you must apply several coats before you begin to get a modest sheen. At the other extreme, on a very high-gloss finish such as rubbed out lacquer or a French polish, wax is superfluous and can actually detract from the finish. I decided to use cherry for the test boards and to finish them with a washcoat of shellac and three coats of a wiped-on poly. This resulted in a moderate sheen, but with the grain structure still easily visible.

On this type of board, wax will not only raise the sheen but will reduce the size of the open pores and result in a smoother surface, particularly if you work it well into the surface and apply more than one coat. I applied the wax, waited for it to dry, and buffed it out. The next day I repeated the process. I also tested how easy the wax was to spread and remove by applying each brand to a mirror and buffing it off.There wasn’t a substantial difference between final appearance in most of the waxes. There were a few clunkers in the bunch, and a couple that stood out from the large middle of the pack. In the end, it’s the elbow-grease commitment, price, and odor (very subjective criteria) that should dictate your purchase.

Wax adds luster and protection, and can even minimize flaws. Finding the right wax is as much personal preference as it is a result of scientific data.

Angelus Clear Shoe Polish
3 oz./ $6*
This is a hard, dense wax with almost no smell. It’s easy to get a thin, even coat. It contains no silicone, an oil that can cause refinishing problems. It buffed out very easily to leave a smooth, even, slick finish.

Antiquax Original Wax Polish
100 ml/$14
Antiquax has a slight traditional wax smell, which is a combination of beeswax and mineral spirits. It has a medium density and is very easy to apply. It took some effort to buff out. While the finished sheen was average, it wasn’t quite as slick as most.

Briwax Original
1 lb./$18
The strongest smelling wax, probably from its toluene solvent, this fast-drying wax was hard to apply evenly, which meant that buffing out took more effort. The result, though, was one of the highest shines of all the waxes

Clapham’s Beeswax Polish
7 oz./$23
Not a pure beeswax—it also contains a little carnauba—it has almost no smell. It was the softest wax and felt rather oily and gooey, but I wiped it around and got an even coating. Buffing also felt different, with less of a transition from sticky to slick, but the shine was about average.

Conservator’s wax
125 ml./$12
One of three microcrystalline waxes, this had almost no smell. It felt oily and slippery to wipe on but was easy to spread to a thin film. It was a bit sticky at first but buffed out to an above-average shine.

Daddy Van’s Unscented Beeswax Furniture Polish
5 oz./$11
This wax contains olive oil and carnauba wax, but no solvents or petroleum by-products. It is quite hard in the can, but it has an oily feel when applied. The wax never dried completely and I was unable to remove all the smearing during the mirror test. It yielded the lowest shine of all the waxes.

Dr. Kirk’s Versa-wax
4 oz./$9
A microcrystalline wax, Versa-Wax has a soft consistency instead of being hard. It goes on sticky and is very difficult to spread out to a thin layer. Getting this wax buffed was extremely difficult but I was able to obtain an average sheen after a lot of work and cloth turning. Even so, the surface stayed squeaky and not slick.

Dura Seal Paste Wax
1 lb./$20
Dura Seal is designed for floors. Nevertheless, the soft wax was easy to apply. It buffed out fairly easily, and had a medium sheen and a slight smell of mineral spirits.

Fiddes & Sons Supreme Wax Polish
500 ml./$19
With a fairly strong mineral spirits smell, this wax is soft and slippery when you start to apply it but dries fast, so you need to avoid using too much. It was easy to buff out as long as the coating was thin. It produced a slightly above-average sheen.

Goddard’s Cabinet Makers Wax
4 oz./$7
Goddard’s has a strong scent of mineral spirits and lemon oil, and a deep yellow color. It was quite greasy to apply, and you need to apply it thinly. It buffed out the easiest of all the waxes, leaving a very slick surface.

Harrell’s Traditional
Wax Polish
400 grams/$39
This wax has a mineral spirits smell and is quite hard. It was slippery and very easy to apply as an even coating. Buffing does require some effort but the resulting shine is pleasant.

Howard’s Citrus-Shield Premium Paste Wax
11 oz./$13
This wax has a pleasant orange scent. It was very easy to apply, with an almost wet feeling. The instructions say to wait 3 to 5 minutes or until a haze develops before buffing. After 15 minutes it smeared rather than buffed, and even after nearly 40 minutes it didn’t seem to really buff out. The shine is toward the lower end of the range.

Liberon Wax Polish Black Bison
500 ml./$30
With a slight vanilla scent and soft consistency, this wax was rather oily and greasy to apply. It required some rubbing and turning of the cloth to remove all the surplus, but it did yield a good sheen.

Lundmark Paste Wax
1 lb./$8
This product was so hard in the can that it was quite difficult to get any on the cloth, but once on the wood it spread easily to an even coat. It took longer to dry than most of the other waxes and when buffed produced only a low sheen.

Minwax Paste Finishing Wax
1 lb./$13
This tan-colored wax was quite hard in the can, but it went on fairly easily, and buffed out with no trouble. It has a slightly lower sheen than some of the other waxes.

Mylands Wax Polish
1 lb./$19
Mylands had the same solvent smell as the Briwax but not as strong. It was difficult to apply in a thin layer and, like the Briwax, it dried very fast. It was easy to buff except in areas applied thickly, which took some effort. The result was a higher shine than most of the other waxes.

Odie’s Wax
9 oz./$38
The only wax that comes in a glass jar, it looked more like a foodstuff, complete with a freshness seal across the lid. The “scientific proprietary formula” is the result of “30 years research and development,” but my advice is to go back to the lab. Applying the wax felt more like spreading suet, resulting in a thick, smeary film. Buffing it up was even more of a chore, and even with frequent cloth changes I was unable to remove all the smearing, resulting in a shiny but slightly sticky surface.

Renaissance Wax
65 ml/$14
This wax was my personal favorite. It has a white appearance like the other microcrystalline wax from Conservator’s, but with a stronger, mineral spirits smell. It is the most expensive wax and comes in the smallest container, so it is just as well that a little goes a long way. Renaissance was the easiest wax to apply; a very small amount gave thin, even coverage. It dried very fast but buffing it was no problem, yielding a very slick surface with a medium sheen.

S.C. Johnson Paste Wax
1 lb./$13
A mass-market wax, Johnson’s is almost as good as the best waxes. It has a rather strong mineral spirits smell but it went on almost as easily as the Renaissance wax with a slippery, wet feel. Buffing it was also simple, both on the wood where it produced a slightly lower sheen and on the mirror where all the wax came off easily. It gave some of the best results and was among the least expensive.

Staples Crystal Clear
Paste Wax
1 lb./$13
Not linked to the office-supply store, this wax has been made in New Hampshire since 1897. Whereas most waxes make a virtue of containing beeswax, this one specifically excludes it (along with silicones). Like the S.C. Johnson wax, it was easy to apply and manipulate with a wet feel, but it was harder to buff away all the surplus, with some smearing left on the mirror despite frequent cloth changes. It produced a slightly lower-than-average shine.

Trewax Clear Paste Wax
12.35 oz./$14
Trewax is the only wax that comes with its own applicator sponge, but curiously the directions only mention using a soft cloth, or 00 steel wool, which seems too aggressive. One of the hardest waxes, it took some rubbing to get any on the cloth. This wax went on the wood rather thick and smeary and was a chore to even out. Buffing required a lot of elbow grease but the finished result was a high, even shine. Other waxes yield equal or better results with a lot less effort. 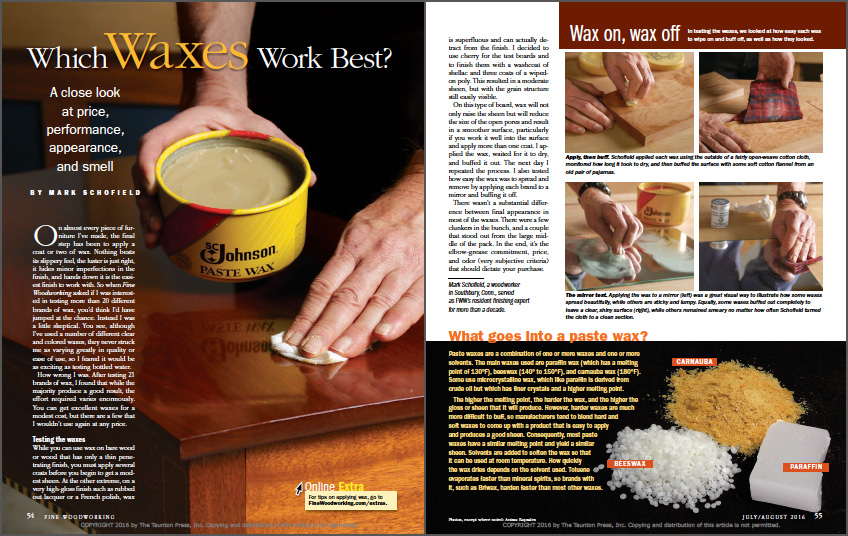