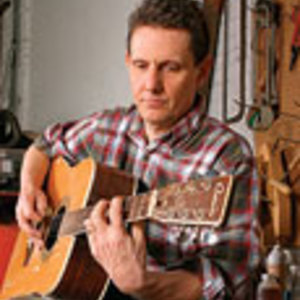 Shellac is a natural resin that’s derived from the secretions of the Lac bug–an insect that feeds off trees indigenous to India and Thailand. The secretions–in the form of cocoons–are gathered from the trees and refined into dry flakes or buttons, which are dissolved in alcohol for application. Cans of premixed shellac are commonly available, but you can also purchase “dry shellac” in flake or button form to mix yourself.

Many finishers prefer to mix their own shellac to ensure that it is fresh. Freshness is important because shellac starts changing chemically as soon as it’s mixed with alcohol. Although some finishers get by just fine with shellac that is years old, my testing indicates that solutions made from dewaxed flakes less than six months old have the best overall moisture resistance. Shellac that is past its shelf life does one of two things: It either won’t dry hard or will cause another finishing material applied over it to wrinkle. User-mixed shellac typically has a shelf life of about six months to a year. 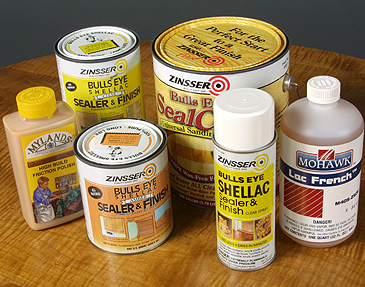 Premixed shellacs are available in both waxed (left three) and dewaxed (right three) form. The product at far right is a padding lacquer made with shellac and the solvents used for lacquer.

Although there are various ways to eyeball a given weight of shellac, it’s best to weigh it on a scale. Measure the amounts of alcohol and shellac you want to use and mix them in a glass or plastic jar. Shake the solution every 30 minutes to prevent a large mass of partially dissolved shellac from forming at the bottom.

(Update: Several readers have questioned the proportions in the chart. The numbers are correct, however, and here’s why: The mathematics for shellac dilution do not follow a general ratio formula because you are working with the weight of a substance in a volume. For example, say you want to take a 2-lb. cut down to a 1-lb. cut. It would seem logical that it would be a one-to-one reduction of shellac to alcohol, but it’s not. When you dissolve 2 lb. of shellac in 1 gal. of alcohol, you displace the original volume by 20 percent, thus giving you 1.2 gal. total in which 2 lb. of shellac are dissolved. So a 1-gal. volume of a 2-lb. cut shellac contains only 1.66 lb. of shellac. Three lb. in alcohol gives roughly 1.3 gal; 4 lb., 1.4 gal, and so on.)

Use the right alcohol
Denatured alcohol is ethanol, which is the same alcohol used in alcoholic beverages. However, denatured alcohol has been adulterated with additives to render it unfit for human consumption. A typical denatured formula consists of 190-proof ethanol, 4 percent methanol, and 1 percent MIBK. The proof refers to the amount of pure ethanol as a percentage divided by 2 (e.g.: 200 proof equals 100 percent ethanol, 190 proof equals 95 percent ethanol). Some finishing purists insist on using 200-proof ethanol, which dissolves the flakes a bit faster. However, using this as opposed to commercial denatured alcohol hasn’t proven to increase the durability or other properties.