Skip to content
Kids In The Shop: Woodworking with Your Kids

A few months ago, I saw a beautiful step stool made by Christian Becksvoort in associate editor Anissa Kapsales’s office, and I immediately wanted to build it.  My 4-year-old has hit the stage where the kitchen stepladder was too high for him and this single step stool would get him to the perfect height. Then the thought hit me: Why not make the step stool with my son? The stool has a through-mortise on one leg and dovetailed construction on the other. If I was going to ask a 4-year-old to take on the task, I thought I’d better stack the odds in his favor and simplify it.

Then it hit me again: Why not get a bunch of kids together and make a bunch of step stools? While we were at it, we could make a video and encourage everyone to get out to the shop with their favorite little ones. Everyone thought it was a great idea, including video manager Jeff Roos (even though it was a logistical nightmare for him). As you can tell in the video, all four kids, aged 4 to 9, had a blast—no meltdowns, not even from the grown-ups. 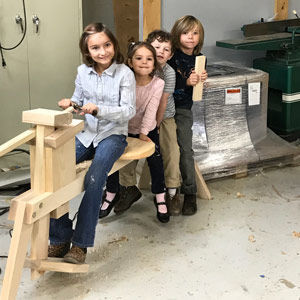 If you want to try something similar with your little ones, there are a few things to keep in mind.

We didn’t have the kids start the project from the top. I cut the parts to size and added the mortise in the step beforehand. If we had included the older kids they’d likely have been fine for the whole build, but when you throw two 4-year-olds into the mix, it seemed best to take out some variables. Again, you’ll know what’s best for your kids, but in my opinion, it’s better to leave them wanting more at the end of the day than have them be bored or frustrated because there is so much work to do.

If you’d like to build this step stool with some little ones, there is a free set of printable plans available here.