Upgrading a Planer With a Segmented Cutterhead, Part 2

After disassembling the previous cutterhead and gearbox, it's time to add the upgrade: a Byrd Shelix helical head.

In part 1 of this series we removed the cutterhead and gearbox from a Delta DC-380, 15-in. planer. The plan is to install a Byrd Shelix cutterhead, gaining improved performance and eliminating the hassle of changing knives. What a deal!

The first thing we need to do with the freshly removed cutterhead assembly is to drain the oil out of the gearbox. We’ll replace the old lube with fresh 90w gear lube after reassembly.

The cutterhead assembly is joined to the gearbox with a collar that locks the bearing and bevel gear in place. There are three flush socket-head screws that hold the collar in place and these screws can be accessed through the ways milled in the cutterhead for the knife and gib assemblies. You might have to scrape a bit of built-up crud off the collar to locate the screws.

Now it’s time to split the gearbox. On this machine there are four socket-head cap screws that hold the case together. With the screws removed, carefully pry the two halves apart using a slim putty knife. There is a fiber gasket between the halves, so be careful not to tear or slice it or you’ll be making a new one from gasket material. With the halves loose, carefully pry the two halves apart. Slow and easy will get the job done; the sprocket shaft bearings will slide out of their housings without much effort. I use slim pry-bars to pry lightly on the bearing (back) side of the sprockets. Set the sprocket side of the gearbox aside, being careful not to tip it over.

With the gearbox split it’s easy to see the spiral bevel gear at the end of the cutterhead. It’s pretty easy to pull the cutterhead assembly out of the gearbox. If it resists, a tap or two on the end of the bevel gear with a wood block and hammer should get things moving. Ours slid out pretty easily. The gear is held in place by a socket-head screw in the end of the gear. Remove the gear; it has a tongue and groove to locate it on the end of the cutterhead. Now carefully pry the bearing off the shaft. Again this might be a place to use a gear puller but there’s not much space between the gear and the collar so you’ll need pretty slim feet on the puller arms. I prefer a pair of slim pry-bars. After the bearing is removed, the collar simply slips off the shaft. We discovered the spring-seal in the collar was toast so we installed a new seal. It’s easy. Simply pry out the old one with a screwdriver and press the new one in by hand. Since there’s a ton of stuff that has to be removed to replace one of these seals it would be a good idea to replace it now even if it looks OK. 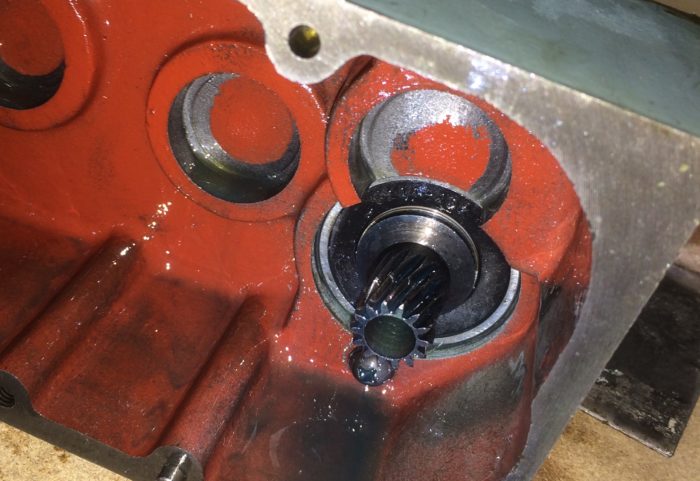 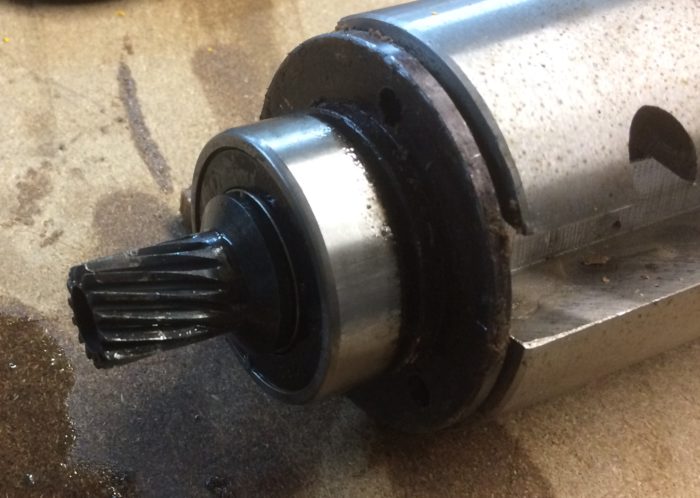 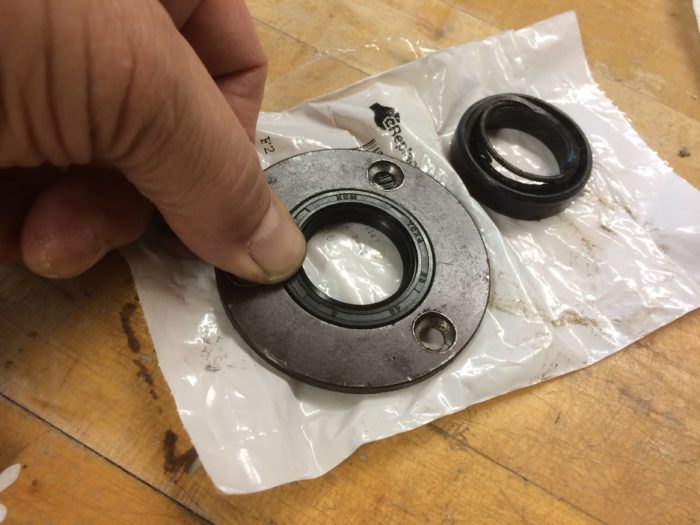 Time for the cutterhead. Before removing it from its shipping cradle, wrap the head with a couple of layers of masking tape. The cutters are extremely sharp and bleeding shouldn’t be part of the process. Don’t use duct tape, the glue will stick to the cutters and leave a mess that’s hard to clean up. 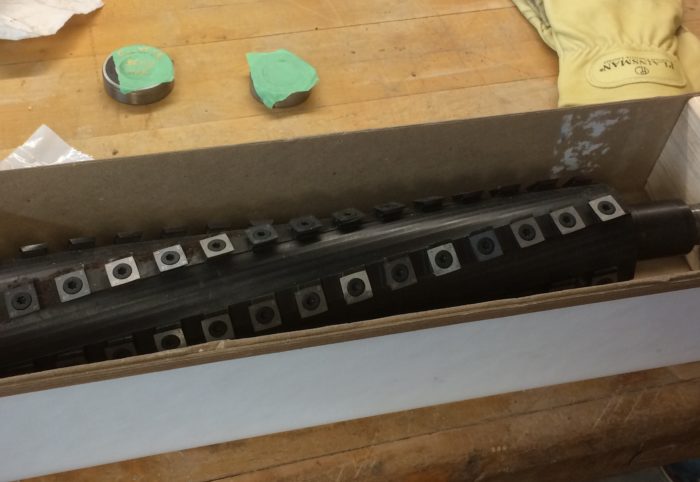 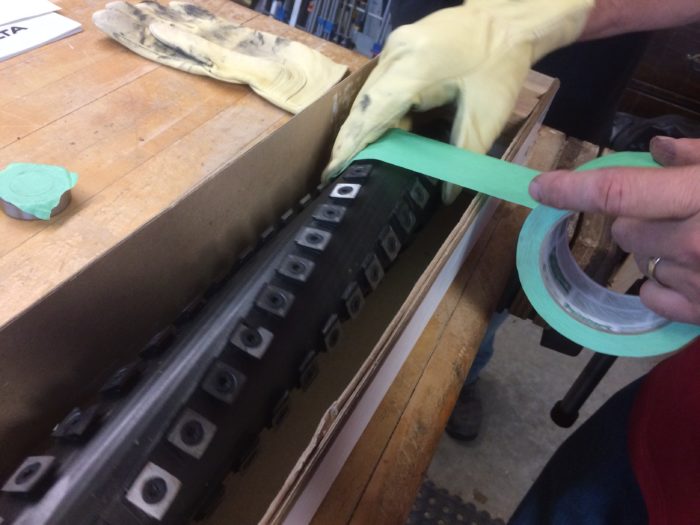 Install the bearing on the outboard end of the cutterhead. A piece of plastic pipe the same diameter as the inner race on the bearing is a good way to gently tap the bearing into place. Make sure the bearing is square to the shaft as you start. Take your time and be careful. The bearing moves down to the shoulder on the shaft so a piece of pipe about 5 in. long will work fine. 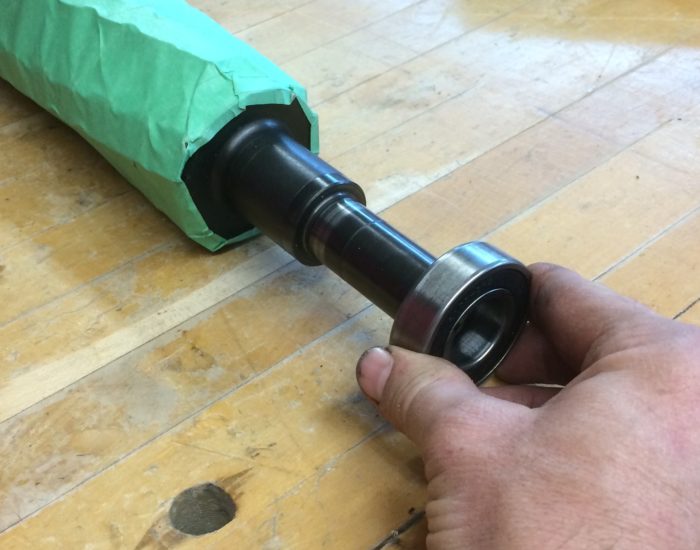 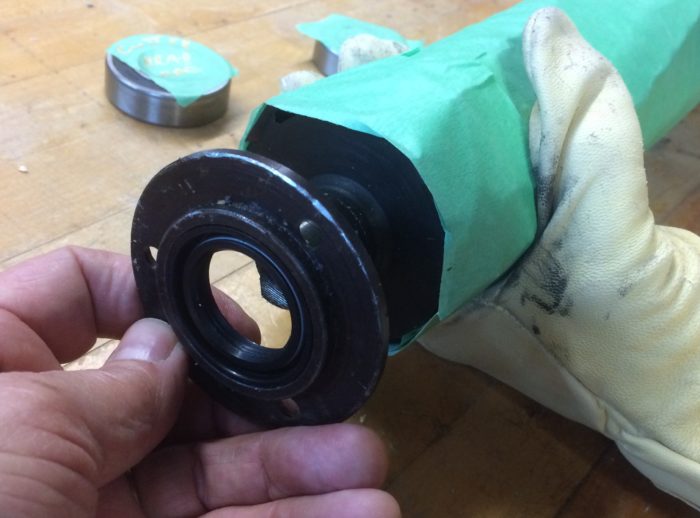 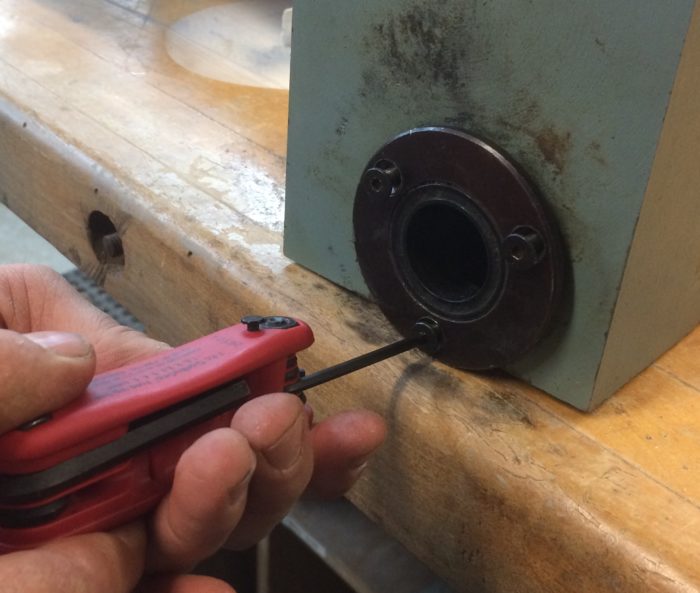 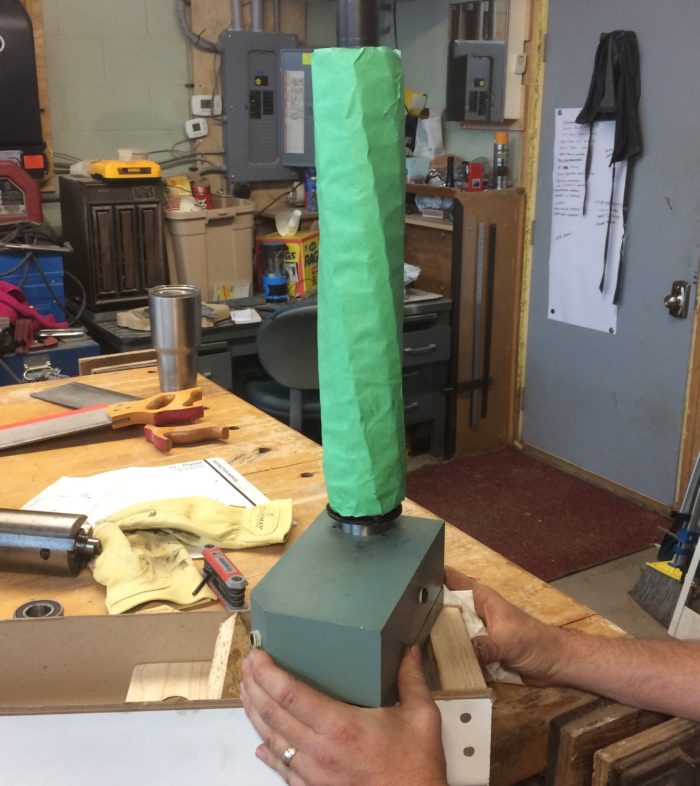 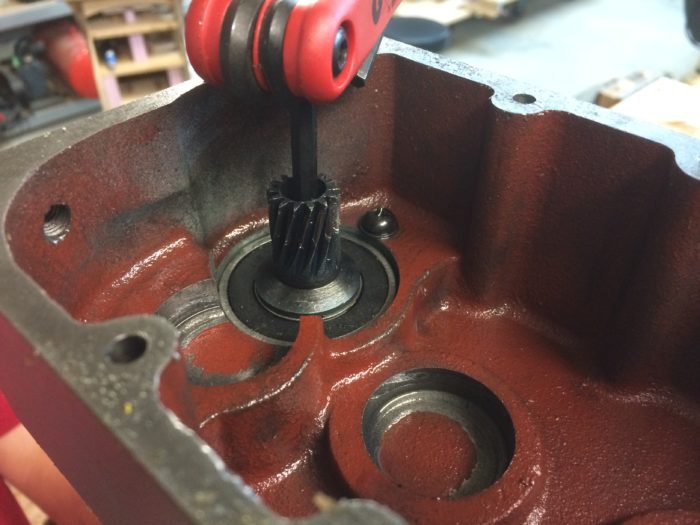 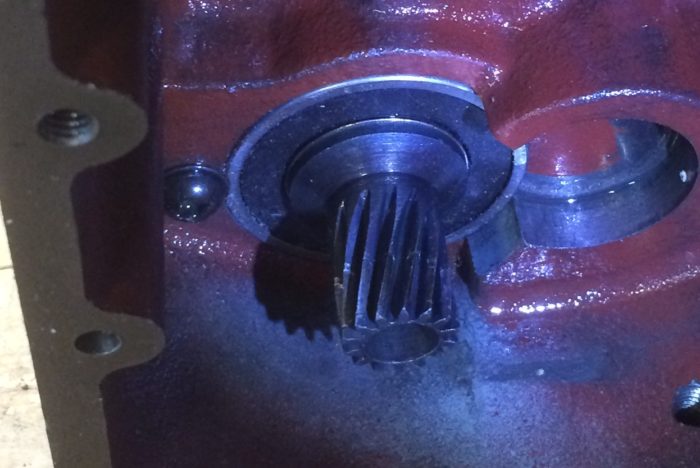 Time to put the gearbox back together. This is where it’s a good idea to have an extra set of hands and a good flashlight. Carefully set the cutterhead/gearbox half onto the gears, lining up the bearings with their respective sockets. The gears can be pushed around a bit to help with alignment—that’s where the light and extra hands come in. Gently set the cutterhead side of the gearbox down and slowly spin the cutterhead as you go to make sure the bevel gear catches the sprocket it runs on without binding. Slow and easy gets it done. With everything meshed and smoothly rotating (watch the output shaft for rotation as the cutterhead is turned) replace the base bolts. Now fill the gearbox with 90w oil. Remove the cap screw on the side of the case and with the case upright (cutterhead on the upper end), pour lube into the case until it runs back out the hole. Now you’re ready to install the assembly back into the frame. Whew, time for a big sigh of relief here, the toughest part is done! 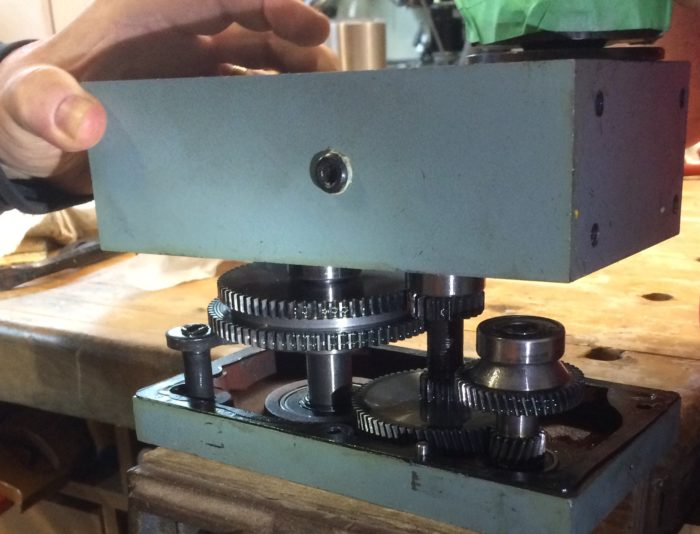 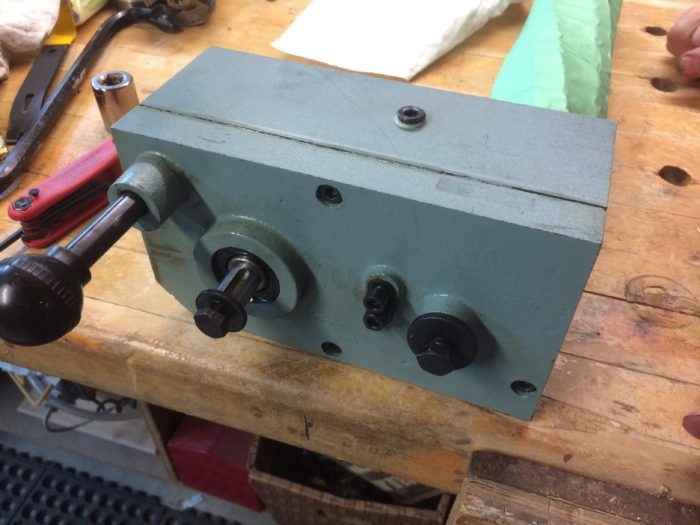 With a stack of offcuts in place, slide the outboard cutterhead bearing back into its socket and bolt the gearbox back into place. Again, keep the gearbox/cutterhead assembly as close to its final location as possible when reinstalling it. The planer frame can be lowered a bit to use the offcuts to keep the assembly in place as the cutterhead shaft and inner bearing are reunited with the bearing socket. A hammer and block of wood against the gearbox can help push the parts together. Be patient and gentle, it goes together pretty easy. 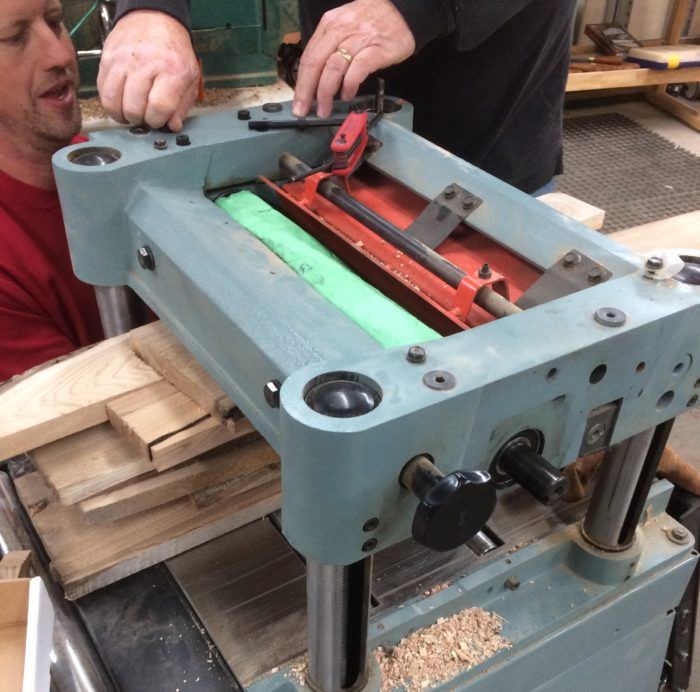 Now it’s a simple mater of putting the sprocket/chain drive back on, reinstall all the covers, pulleys, and belts and your new cutterhead is installed, ready for years of high-quality planing. The photo below shows Don Peterson using a stout pry-bar to get proper belt tension. That motor is heavy and a little brute force works well here. 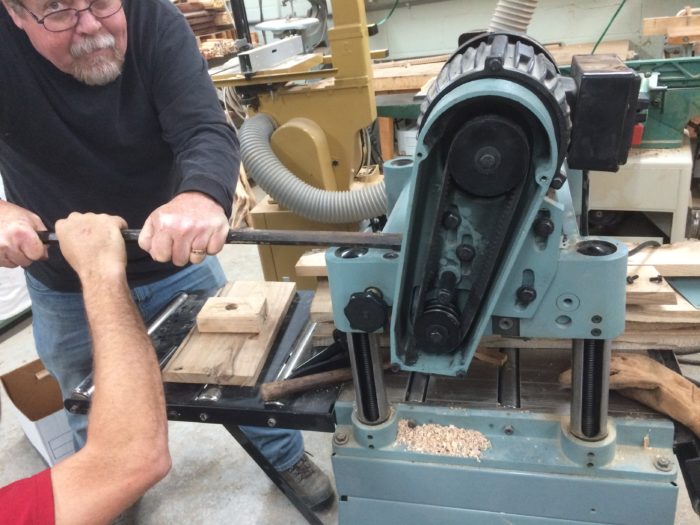 Owner Don Wade is pretty happy about the update to his old workhorse! 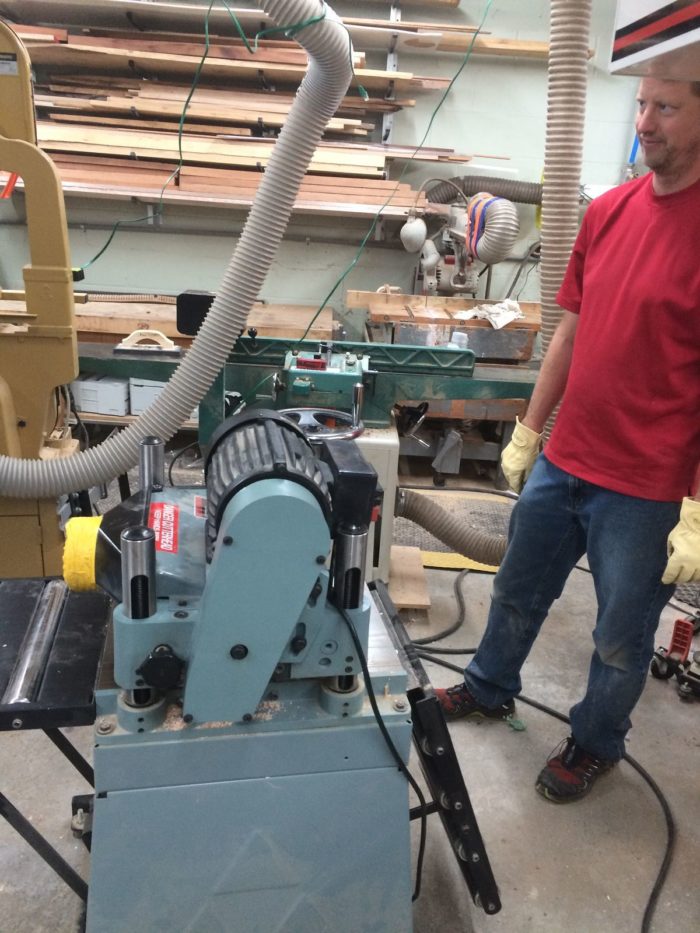