Thomas Chippendale and The Origin of Design

Published first in 1754, Thomas Chippendale’s Gentleman and Cabinet-maker’s Director was a revolution for the world of design. Prior to its publication, Chippendale was one of many furniture makers working in London during the mid-18th century. His shop produced a range of fine works in the English Rococo style, similar in many respects to the work of his peers. Chippendale employed a variety of people, each working in a specialized trade within furniture making. All of this was unremarkable in 1750s London.

Two of the people working under Chippendale were Matthias Lock and Henry Copeland. Both of these men were ornamentalists, the 18th-century term for designer. Both had been familiar with publishing and design prior to working for Chippendale. Lock, a carver as well, had produced and published five books of designs intended to be sold to other carvers who wanted to learn the new rococo style. Copeland, too, had produced a book of designs intended for sale to the trades. Upon entering the employ of Chippendale, Lock and Copeland met Matthew Darly, a London engraver, as well as a friend and employee of Chippendale. 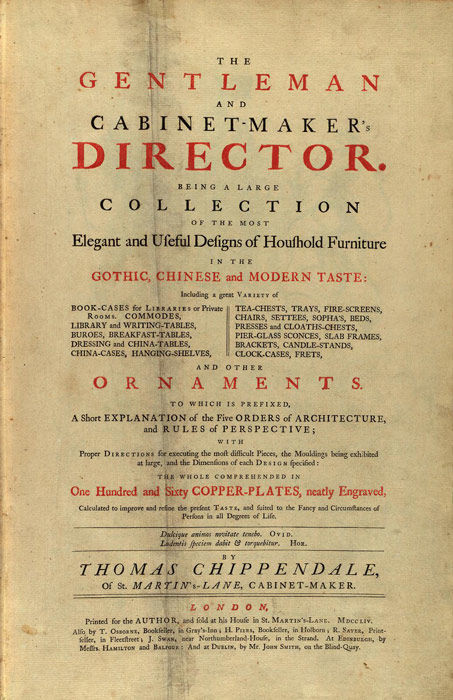 The combined talents of these three people now meant that Chippendale had the ability to design, engrave, and print a series of new work. Now this was nothing new. Design books intended for the trades were not a new idea and had been common in continental Europe for nearly a century by the 1750s. As I said, Lock had already published five books and Copeland one.

What made Chippendale’s name synonymous with 18th-century furniture was much more subtle than that. Where Chippendale’s real genius lay was in where the book was intended to be seen. Chippendale did not market it as a simple design book intended to be sold to other furniture makers, but rather titled it  The Gentleman and Cabinet-maker’s Director. The addition of that one word, “gentleman” did something revolutionary, and for the first time in history created a mass market for furniture.

The importance of this development cannot be overstated. Prior to its publication there was no way for a person to want a piece of furniture that they had not seen in person. As a result furniture styles, like most styles, progressed extremely slowly. The clients were very limited in what they had seen before, and thus what they were equipped to desire. To desire an object a person must first and foremost simply know of its existence.

Chippendale changed all of this. By marketing his book directly to the client he triggered a flourishing of design all over the English world. It was now possible for a person living anywhere to see the design in the director and take it to a local maker. This allowed the designs of Chippendale to spread around the globe in an instant, carrying with them the style of 18th-century London and the name Thomas Chippendale.

The echoes of this incredible publication continue to be felt 265 years later. Even today ,people know the name Chippendale. They may not know of the director, and they may not even know that Chippendale was a real person. But they certainly know the furniture, the design, and the style.

So I ask you, when you think of period furniture and Thomas Chippendale, don’t think of it as out of fashion, as that may be. Think instead of the revolution of design and the flowering of craft that came from the simple act of publication.

-Bob Miller is a custom furniture maker and woodworker based in the Charlestown neighborhood of Boston. In addition to his own line of work, Bob manages The Charlestown Furniture Makers which is an 18-tenant co-op, solar-powered woodshop located in the Sullivan square area of Charlestown.

×
X
X
Previous: Chairmaker’s Shop Has a Kindred History Next: The Story of a Chair