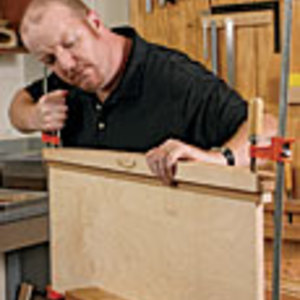 Tom McKenna is the editor of Fine Woodworking magazine. He was introduced to woodworking when he enrolled in a basics class during his freshman year in high school on Long Island. Those days it was small projects made of knotty pine, with rudimentary dark stains and runny finishes that became a trademark of gifts for Mother’s Day and Father’s Day. While studying journalism in college, Tom made bigger things from wood, working part-time building decks and additions to pay for expenses at school (books and beer).

His first job out of college was copyediting a physics journal, a position that helped him learn the Greek alphabet and refine his math skills. In 1989 he dumped the Greek in favor of English, working on the copy desk of a local newspaper on Long Island. He moved to Connecticut in the early 90s, to become an editor at a home improvement magazine. He landed at Fine Woodworking in 1998, working behind the scenes as the magazine’s senior copy editor, a job that allowed him to re-engage his woodworking hobby in earnest. In 2004, he came out from behind the curtain, taking a job as associate editor, which allowed him to escape from the desk and travel the country, taking photos, meeting people, and learning more about woodworking. He gradually moved up the masthead, taking over as lead editor in October 2012. Tom lives in central Connecticut with his wife and two children.