Faces of the Craft: Rosanna Coyne

It was in a class at the North Bennet Street School where Rosanna Coyne discovered carving, and found the passion that changed the course of her woodworking journey.

Synopsis: Rosanna Coyne began making furniture as a child, and continued her woodworking education in a traditional manner as an adult by taking classes at North Bennet Street School. It was in one of those classes that she discovered carving, and found the passion that changed the course of her woodworking journey. 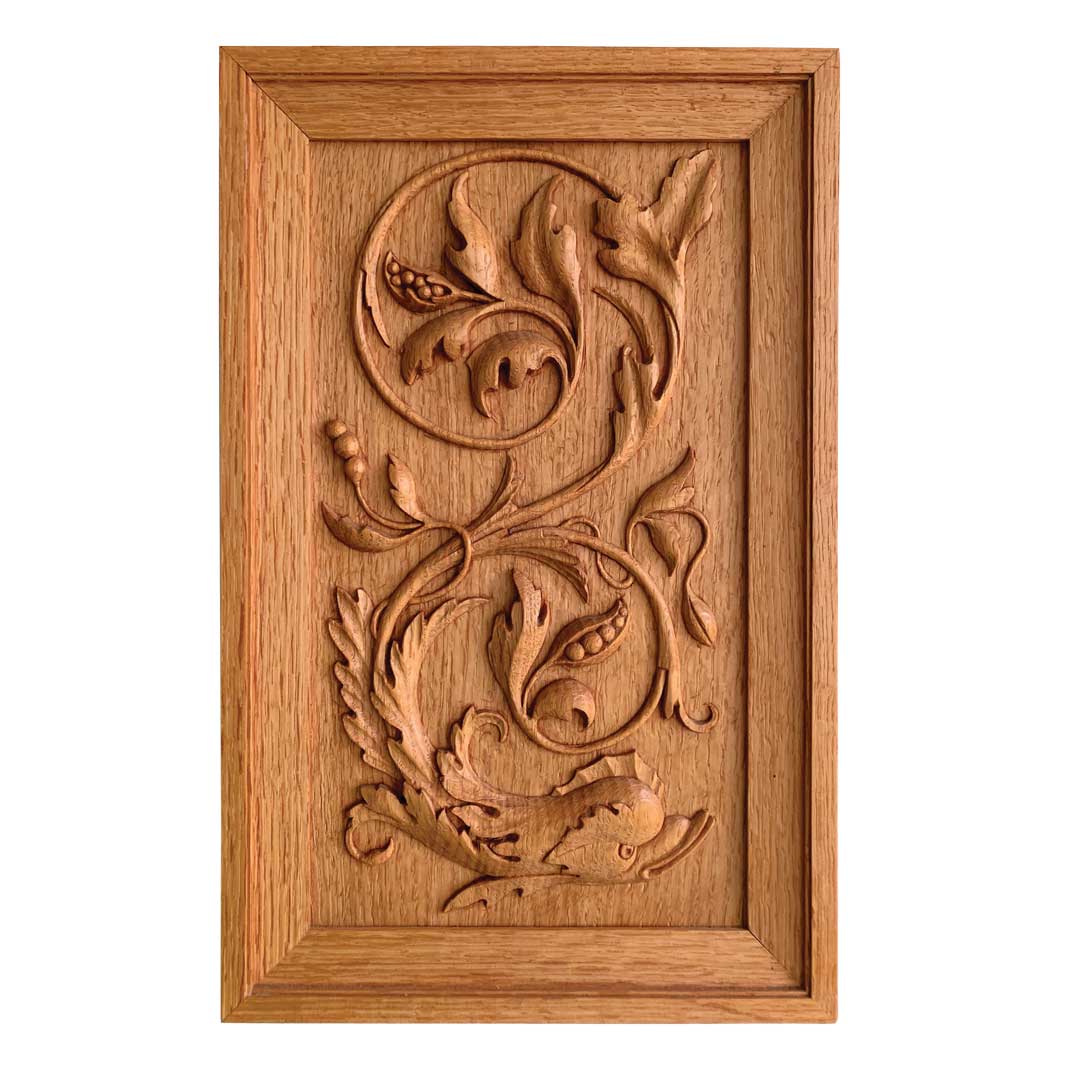 Master wood carver and wood turner Rosanna Coyne was introduced to the hands-on life at an early age. Her mother and father both emigrated to the United States from Sicily, Italy, and did things the old way. Her mom canned the produce from her father’s big garden. He worked as a general contractor, and Rosanna followed him around job sites from the time she was 9 or 10 years old, filling nail holes in trim or whatever she could do to be useful.

On a recent visit to her grade school, Coyne saw her awards from 7th and 8th grade industrial arts classes, still on display. “I started reading Fine Woodworking at 12 years old, and I wanted to make my own stuff,” she said. “My dad had a shop in the basement, with a radial arm saw, tablesaw, and bandsaw, and I made bookshelves and a desk for my bedroom. I used them, and I was proud of them.”

After graduating from the University of Hartford in Connecticut with a business degree, she went to work in the city’s main industry, insurance. “My heart wasn’t in it,” she said. “But I was able to save money, and I started buying woodworking tools.”

Through college and her corporate career, Coyne continued to work with her father. “It was fun,” she said. “Finish carpentry was the highest level he got to, so I would do the built-in cabinets, mantels, closets, and higher-end stuff.”

To build her knowledge of fine woodworking, Coyne took a series of weekend classes with Steve Brown at Boston’s North Bennet Street School.

Carving, turning, and whatever it takes

While still at the insurance company, Coyne took another class at NBSS, a carving course with Dan Faia, which launched the main direction of her woodworking career. 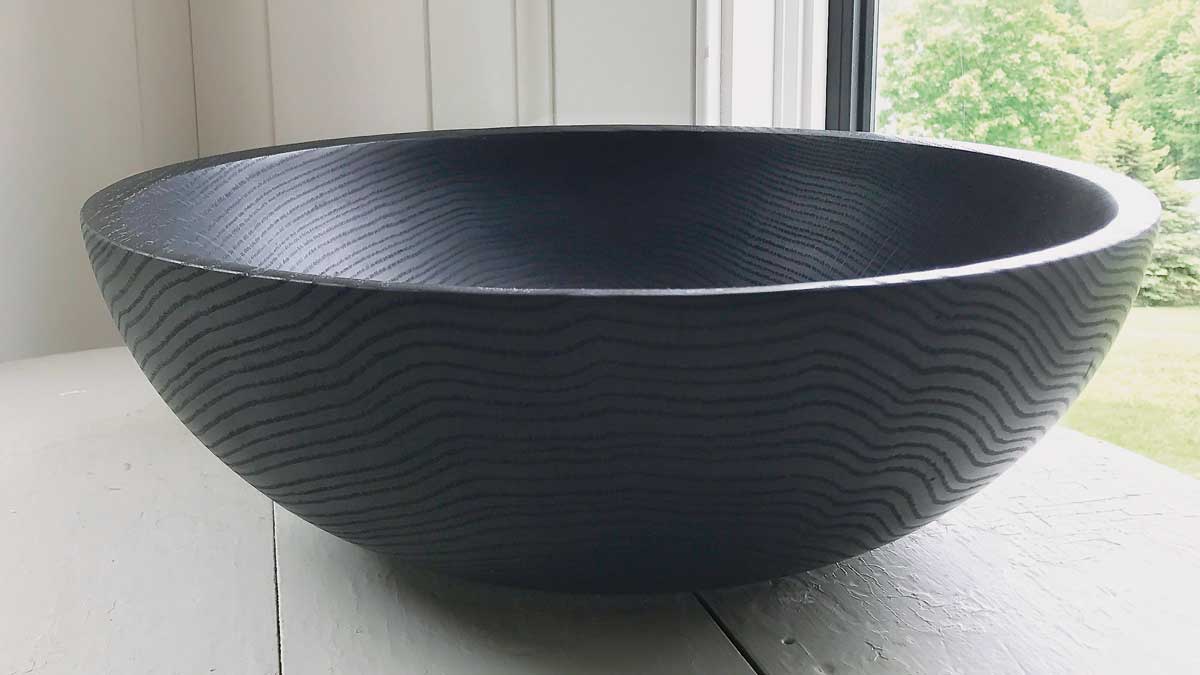 Noting her passion and aptitude for the work, Faia told Coyne about renowned wood carver Dimitrios Klitsas, who offered classes at his shop in central Massachusetts. She took classes with Klitsas from 1994 to 1999, and left her corporate job in 1997 to work full-time in his studio. A European immigrant like her dad (who shared a similar upbringing and traditional values), Klitsas was a little hesitant to hire a woman. “He was old-school, from Greece,” she said. “Having a woman work for him was huge.” Just as she had with her father, Coyne focused on the work, and earned a respected place in the workshop. In 2002 she moved on with Klitsas’s blessing to work for herself. 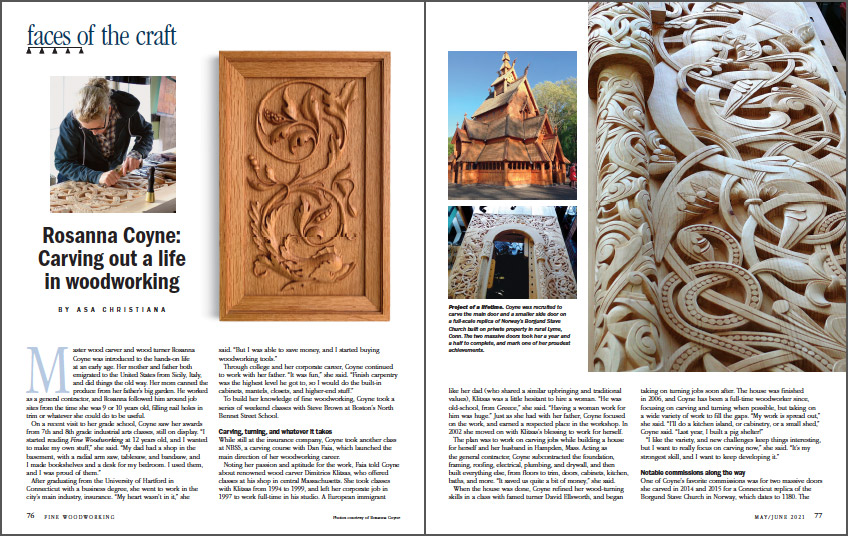 Aspen Golann was intensely curious and determined from the start. At 8 or 9, she remembers leaving early for school to sketch an interesting house on her street.

Robell works to bridge woodworking’s opportunity gap and challenge the scope of “period” and “fine” furniture.

On a cold January day, just two weeks into his job in the Hay Cabinet Shop at Colonial Williamsburg, Jeremy Tritchler can’t believe his luck.