I love experimenting with grain patterns. And when I bandsaw my own veneer, I can slice 12 or more pieces from a 2-in.-thick board. With so many consecutive leaves of veneer to play with, I can array them in patterns that range from pleasingly rhythmic to bold and stunning. You can do the same with commercial veneers, as long as they are flitchsawn. 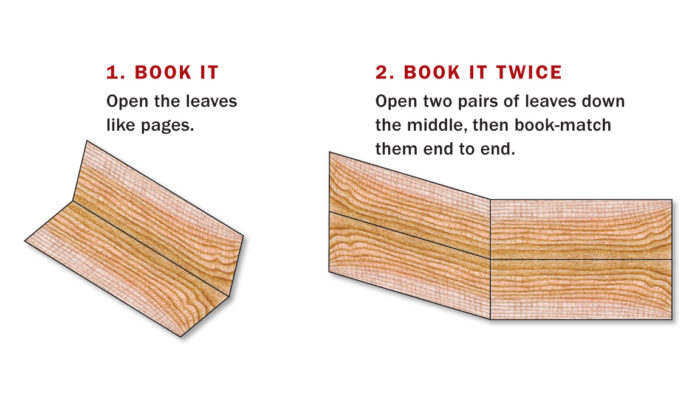 I’ll show you the four techniques for arranging veneer that I use most often. In all of them the leaves are edge-glued, with the grain on all the pieces running parallel. So, the veneer can be glued either to a solid-wood substrate (as long as the grain on the veneer and the solid wood runs in the same direction) or to sheet stock. 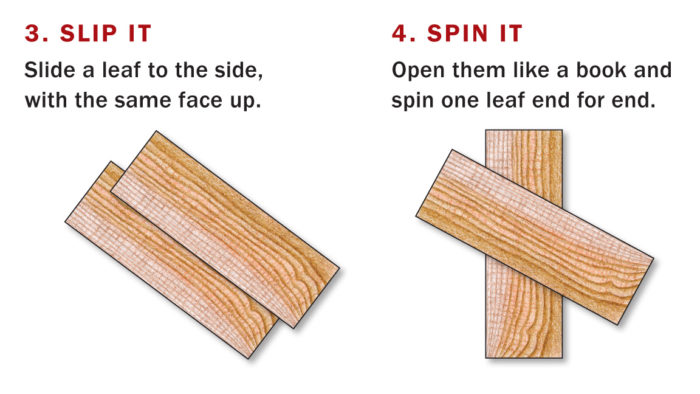 Finding the best way to arrange a set of veneer leaves can require you to handle the leaves quite a bit—flipping, rotating, and sliding them around. Don’t hesitate to work the leaves into as many arrangements as you can imagine. Shopsawn veneer, which should be about 1⁄16 in. thick, is tough enough to handle it.

The first match most woodworkers use is the book-match, which is a natural and beautiful choice in many situations. Two consecutively cut leaves of veneer are opened along their long edges like the pages of a book, and the grain on one mirrors the grain on the other. The pattern created across both leaves can be mesmerizing. The impact of a two-leaf book-match across the front of a cabinet can range from subdued to wild, depending on the grain of the veneer. The look will be affected by which edge of the leaves is used as the spine.

The secret to this technique for matching grain is a double book-match. One takes place along the long grain, but for the other, the end grain is used as the spine for the book’s pages. The patterns created by the grain as it runs around the four leaves of veneer are always dynamic and dramatic. 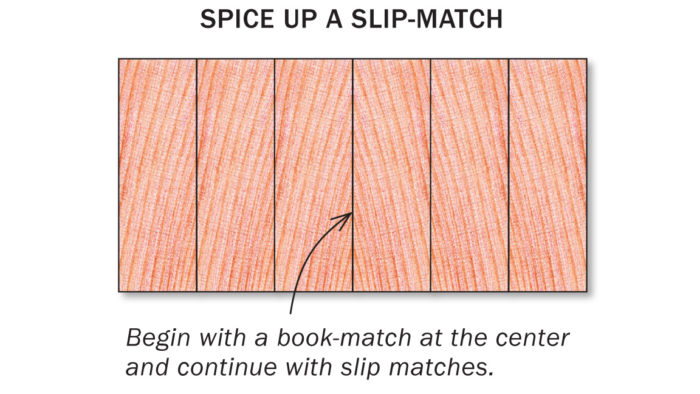 Take a stack of veneer. Slide off the top one, and then the second one, laying them down side by side. Repeat with as many leaves as you’d like. This is a slip-match. It works very well with narrow pieces of veneer and quarter- and riftsawn veneers. However, it can be a bit repetitive. To liven things up, start with a book-match in the center and then use slip-matches on either side.

This is my go-to matching technique for large surfaces like tabletops. It’s a two-step process. Start with a book-match and then spin one leaf 180°. Instead of having grain that creates cathedrals, you’ll get grain that spills across the surface fluidly and without interruption. The joints between leaves often disappear as a result. The spin match is great for figured woods, because light will reflect off adjacent leaves in the same way. The chatoyance across the surface is consistent, rather than alternating from dark to light. 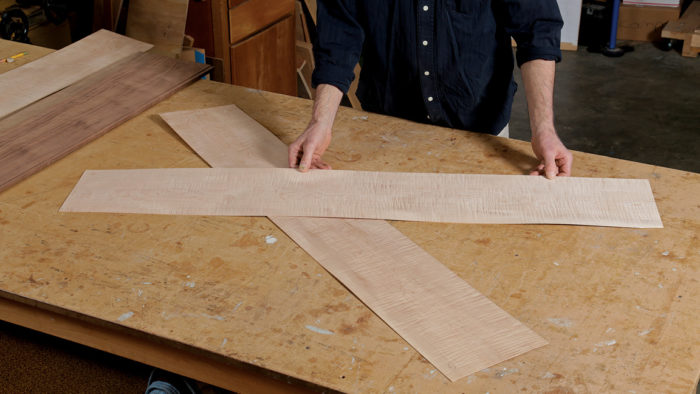