Hand-tool expert Vic Tesolin shows three ways to cut a rabbet by hand—with a rabbet plane, with a shoulder plane, and with a chisel and router plane.

Although not as glamorous as the dovetail or as robust as the mortise-and-tenon, the rabbet joint is just as useful. It shows up in casework as a place to put a frame-and-panel back and is a popular way to fit a drawer bottom into its grooves. So it’s a good joint to learn. In my shop, where I depend on hand tools to cut all joinery, I’ve employed three approaches to cut rabbets. For through-rabbets, I go with my rabbet plane; before I had it, I used a shoulder plane. For a stopped rabbet you can’t use either plane, but a chisel and router plane get the job done. I’ll show you all these methods.

The rabbet plane originally looked a lot like a shoulder plane but has evolved into a tool even better suited for cutting a rabbet. Rabbet planes now have fences to control the rabbet’s width, and some have depth stops. Most rabbet planes also have a nicker in front of the blade that’s used to sever fibers when cutting a rabbet across the grain. This allows the shavings to break away freely from the workpiece.

There are two things to keep in mind when setting up a rabbet plane. Make sure that the blade’s cutting edge is parallel to the mouth; otherwise, the bottom of the rabbet (the cheek) won’t be square to its side (the shoulder). Also, the blade should stick out just a whisper beyond the body on the side that cuts the shoulder. If not, you’ll end up with a stepped shoulder. One last note: Even though the fence and depth stop control the rabbet’s dimensions, I still begin by laying out the joint with a marking gauge. This is helpful when I set the fence and stop and ensures clean edges along the rabbet.

Early rabbet planes look a lot like what are known as shoulder planes today. Those early rabbet planes had a different bedding angle and often had a skewed blade, but their bodies were almost indistinct from those of modern shoulder planes. It’s no surprise, then, that you can cut a through-rabbet with a shoulder plane. Set up the shoulder plane as you would a rabbet plane: blade parallel to the mouth and sticking out just a bit beyond the body. Because shoulder planes do not have fences or depth stops, you must lay out the joint with a marking gauge. The line marking the rabbet’s depth tells you when to stop, and the one marking the width helps you to get the joint started. You’ll also need to check that the rabbet’s cheek is square to its shoulder and tweak it if it’s not. 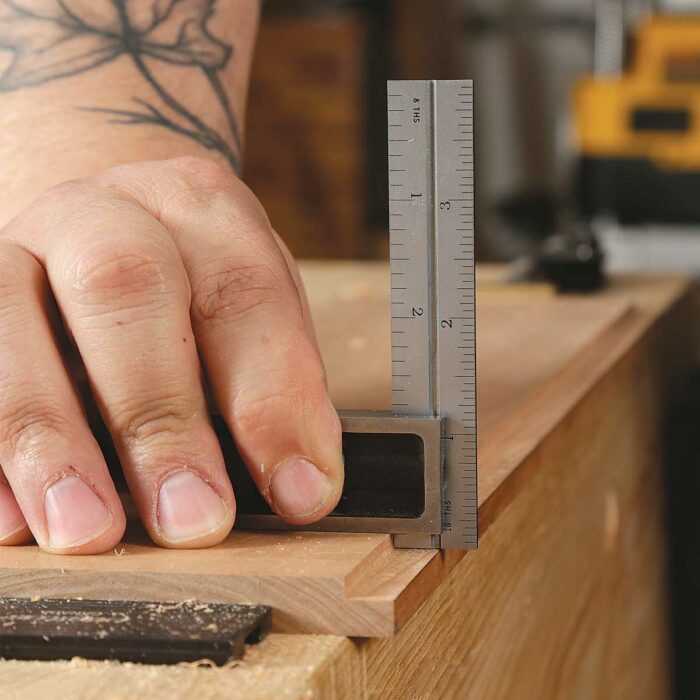 There are times when you need a stopped rabbet—on the back of a dovetailed cabinet, for example—and you can’t cut one with a rabbet plane or shoulder plane. You don’t need to plug in a router or some other power tool to cut one. You could do it with nothing but a chisel.

I’ve done it, and it’s a tedious and time-consuming job. It’s more efficient to pair that chisel with a router plane. Use the chisel to remove the bulk of the waste, and then put the router plane into service to level the rabbet’s cheek. You can get by with a single chisel, but I use two chisels—a narrow one to break up the waste, and a wide one to define the rabbet’s shoulder. As for the router plane, it doesn’t need to be fancy. You just need to be able to lock its blade to a depth that matches the rabbet. 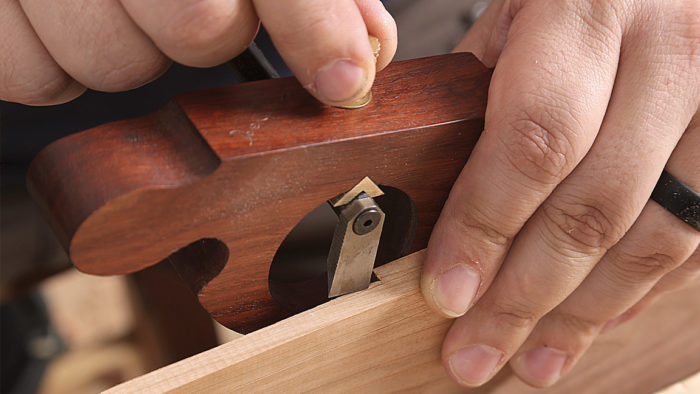 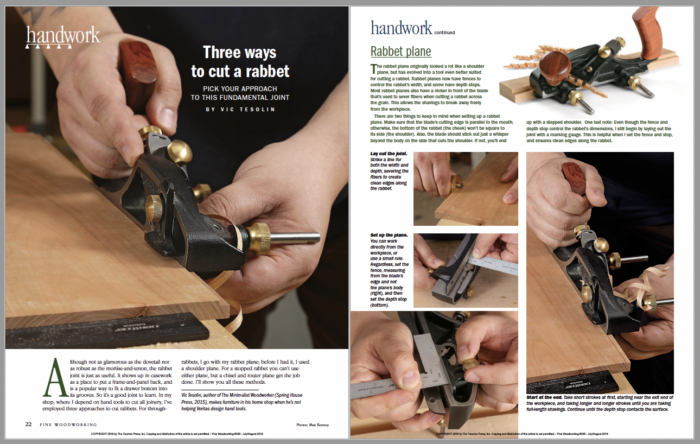 View PDF
X
X
Previous: A Lesson in Basic Joinery Next: An Uncommon Way to Cut Rabbets by Hand