The dovetails typically shine in a box, but with this project the handmade wooden hinges take center stage.

This is the second of two articles on making a dovetail box with wooden hinges. The first article explained how to cut the dovetails and assemble the body of the box. Here, we show how to build the base and lid and install shopmade wooden hinges.

Build a Frame-and-Panel Base

The lid and base of this box are made using a frame-and-panel technique. The base parts are mitered and assembled around a Baltic birch panel that helps reinforce the mitered joints.

The lid is similar in construction to the base, but because it uses solid wood as the panel material, a different method is required to secure the corners. I decided to use keyed miter joints at the corners of the lid frame, a technique used on many other boxes in this book. Rather than using a contrasting species of wood that would draw attention to the keys as a decorative element, I used walnut keys to match the walnut frame.

Shopmade wooden hinges are a nice complement to the handcut dovetails on the sides of this box. Making your own wooden hinges is also a straightforward operation. For more on making wooden hinges, see “Shopmade Wooden Hinges.”

Installing wooden hinges is a fairly simple, but you’ll want to make sure you don’t add unnecessary stress on the hinge barrel. Because wooden hinges can be fragile when subjected to stress, they must be positioned precisely and squarely so that they can move freely throughout the normal range of motion. It helps to have a place where they nest squarely built into the design of the box. I cut mortises at the back of the lid to help position the hinges. These mortises also provide a bit of overhang at the back edge of the box.

All sanding should be done to the box prior to installing the hinges, but the Danish oil finish should come after the hinges are glued in place. Use construction adhesive like Leech F-26 or Liquid Nails to attach the lid to the base. Use masking tape to hold the base in position while the glue dries. 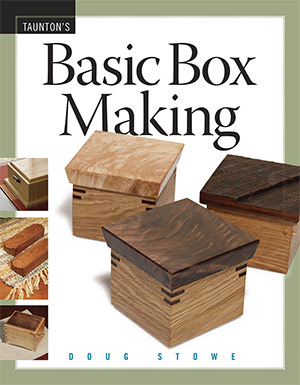