Israel Martin renovated an 18th-century stone house in the Cantabria region of northern Spain for his all-hand-tool workshop.

Synopsis: Israel Martin renovated an 18th-century stone house in the Cantabria region of northern Spain for his all-hand-tool workshop. He built all the workbenches and cabinets, too. With inspiration from Garrett Hack, he’s established himself as one of the very few Spanish furniture makers who works strictly with hand tools.

My house and shop are in a village of 15 people in the Cantabria region in northern Spain, near Basque country. Our little village is surrounded by fields and small forests of chestnut, oak, ash, and hazelnut. When my wife and I came here from Madrid (where I was born) we bought and renovated two adjoining old stone houses that were pretty much in ruins. one is from the end of the 19th century, and it became our house. The one beside it, where my shop is, dates from the end of the 18th century. like all the houses in this area, ours are made with thick stone walls—2 1/2 ft. thick. Originally houses like these would have had the living space in the front and a barn space for hay and cattle in the back. 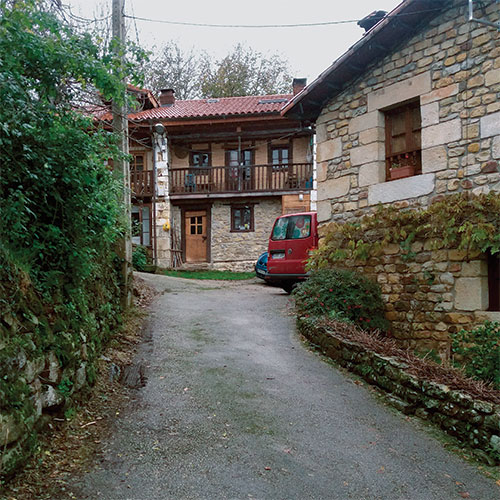 We spent two years renovating our house, and then I started on the shop. The roof needed to be completely replaced, and the back wall had collapsed, so I rebuilt it, replacing the upper part of it with a wooden framework and large north-facing windows. For the shop floor I used recycled pine and I paneled the walls with pine as well. Then I made the workbenches and the tool cabinet. I put them by the north windows where the light is nice and soft. on clear days during the spring and autumn, the afternoons in the shop are glorious, because the sun gets in and makes the shop look so warm.

I used power tools as I was building the shop, but all along I knew I wanted it to be a space for hand-tool-only woodworking. how I reached that decision is slightly unconventional. one funny thing was that when we were rebuilding the house, we found under a pile of rubble an old woodworking workbench, in very bad shape, its top made from one wide plank of oak. It felt like a sign.

Finding my way into woodworking

I graduated from college in 2000 with a degree in forest engineering and went to work in Spain’s department of forest fires, ultimately becoming technical director in a region in central Spain; my job was to manage all the people, trucks, helicopters, etc. involved in fighting a forest fire. It was a really interesting job, and it certainly stimulated lots of adrenaline, but at the end it was sad.

When I became a father I decided to take a break from it and raise our daughter while my wife continued working. After two more kids arrived, and we moved to Cantabria, I became a full-time house-husband (which I am still today). At that point I decided to return to woodworking and leatherworking, which I had dabbled in during college to make some money. The difference this time was that I wanted to do it as well as I could.

I started learning online, which provided some limited benefit, and then I took classes with a spanish artisan to learn more about hand tools. I began working on my shop and making small projects for my family and friends. While I was looking for more training, I heard about the German tool company Dictum, and that led me to discover Garrett Hack, who was going to be teaching there. I read his books, and fell in love with woodworking tools. And twice I traveled to Germany to take workshops with him; that was the real point when I started working as hard as I could to become a furniture maker. A year or two later, my friend and fellow woodworker lorenzo Garcia and I arranged for Garrett to come to Spain to teach. I found him inspiring as a furniture maker, but also as a person.

Why only hand tools? 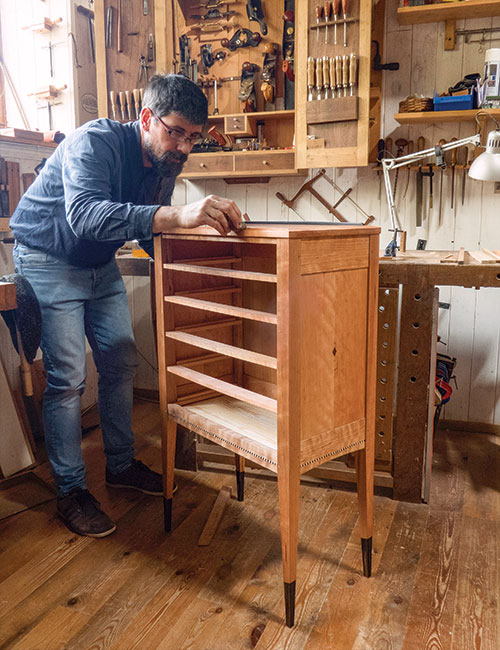 My decision to work only with hand tools had something to do with Garrett, and with Tom Fidgen’s work, which I followed online. But the strongest pull was the tools themselves. Working with beautiful tools is a pleasure in itself, and it reminds me how my work should be at the end: useful and beautiful. There is a really satisfying feeling when I have finished a piece. I look at it and I say to myself, “I did that only with my hands.”

Another important impetus for working only with hand tools is that I live in such a small village, where you normally just hear the birds and nature; machines wouldn’t let me work quietly.

And then there is the fact that I am one of the only Spanish woodworkers making furniture strictly with hand tools. Very few hand tools are in use now in Spanish furniture making and I think there should be a place for them in our workshops. After six years using them myself, I am now teaching other woodworkers, amateurs and professionals, how to use hand tools properly. I’m hoping that these skills will be rediscovered by a great number of Spanish woodworkers.

I build my benches

The design of my two main workbenches comes from typical old benches. I used oak and beech in my first bench, just to use both woods and learn more about them. I found that oak didn’t suit my needs because it tends to tear more than beech, and any scratch tends to get larger with time. I found beech the best wood for a bench, in terms of price, workability, toughness, and durability, so I used it exclusively in the second bench.

The front vises are very useful for sawing and planing; they are not the best for joinery, but I made that compromise as I balanced the main tasks that I would use them for. The height of the benches is another balance between those three tasks. For planing it should be lower, for sawing it is just right, and for joinery it could be slightly higher.

The tail vise is the easiest and fastest tail vise I could make, and it works really nicely for me. 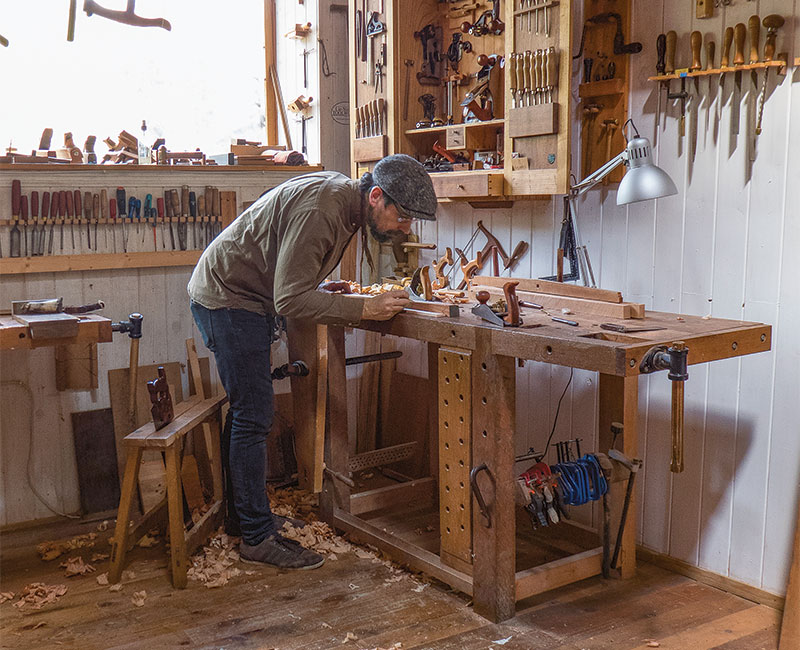 I built a rolling table that is a multi-purpose piece. I use it as an auxiliary table to hold parts and finished assemblies while I’m working on a project, and I use it also for glue-ups, for finishing, and as a drawing board when I’m designing. It has a pine frame and MDF panels that I recycled from a wardrobe. I used half-lap joints and through-mortises for the frame, and fixed the MDF boards with screws. Having it on wheels is important because I like to work with a big space around me and I can move it very easily.

On the shop’s west wall I have lumber storage and a crude counter on sawhorses. I store offcuts there as well as long boards. I keep a lot of offcuts, especially long and thin ones, because sawing and milling thin pieces by hand is challenging and those little pieces are useful as drawer guides, etc.

My lumber rack is simply metal brackets fixed to the wall. I have more lumber storage in the entranceway and on the shop stairs. The counter is a “provisional” piece of shop furniture that seems to be becoming eternal. I have it in mind to make a dedicated planing bench to replace it; I’ll make the new bench lower and longer than my other benches. Then I may build a dedicated bench for joinery with a longer front vise.

A cabinet for everyday tools

I designed my tool cabinet to fit the tools I use every day. I also wanted it to reflect the kind of furniture I make. It has a carcase made of Spanish chestnut, door panels of walnut, and back panels of Douglas fir. The carcase is joined with through-dovetails, and the lower shelf is attached to the case sides with sliding dovetails. It is a tall cabinet but also fairly wide and the sliding dovetails help strengthen it. The second shelf is just set into dadoes. The chisel racks are attached to the doors with French cleats, so I can lift them out and put them on the bench.

The tools come out of the cabinet every morning and they have to be inside again when I leave the shop. I wanted them to be very accessible and easy to find. There is still space for more tools inside but adding them would compromise the cabinet’s usability. Hmmm. As usually happens, I find it’s necessary to build something new; I’ll make a second cabinet to accommodate the other tools. 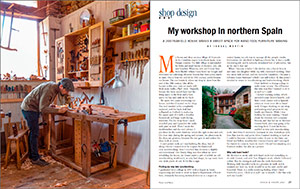