From time to time, I demonstrate at Lie-Nielsen Hand Tool Events. Typically, I drag along my shooting board, my saw hook, and my planing stop (along with a bunch of my hand tools) and show the folks there how I use them to make and fit small trays in a jewelry box. Of course, I also answer questions while I’m there. And one question that I get asked a lot (and I mean by almost everyone) is why the plane doesn’t continue to cut into the shooting board with every pass. Of course, if it did do that there’d be no easy way to controll how much you were trimming from the end of your workpiece and you’d pretty quickly ruin the shooting board, too. There is a straightforward answer to the question and it was included in an article I recently wrote for Fine Woodworking (“Make Short Work of Small Parts,” #214, pp.65-69). The answer I give in the article is dead on right, but I’d like to give the answer in a slightly different format, something more akin to how I answer the question when speaking to folks at the Lie-Nielsen shows. I can’t pick up a plane and my shooting board and explain the answer like I do there, so I’ve put together a few drawings to illustrate the same points.

Let’s start by looking at the sole of a typical bench plane (or a block plane like the low-angle jack I use with my shooting board). Notice that the plane body is wider than the blade. that means that the blade cannot cut all the way to the edge of the sole. That’s the first part of the answer. 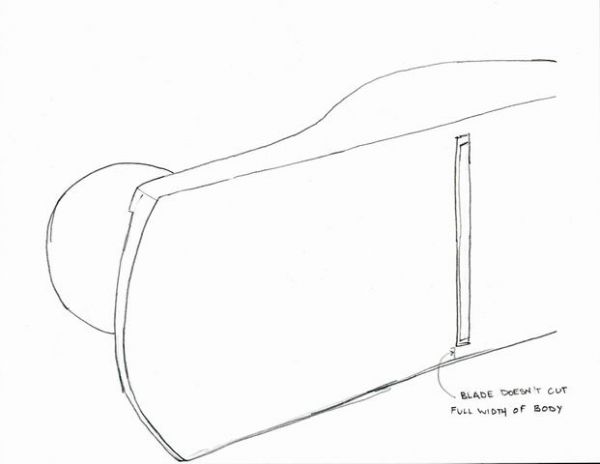 Here’s the second part of the answer. Because the blade can’t cut all the way to the edge of the plane body, a tiny and very thin lip of wood on the runway is never cut by the plane. The lip is only as tall as the space between the edge of the plane body and the blade, and its thickness is roughly equal to the thickness of shaving the plane is taking. So it’s really thin. But that doesn’t matter. It’s there and it never gets cut, so it becomes a built-in depth stop and guide. It prevents the plane from continuously cutting into the shooting board and workpiece. 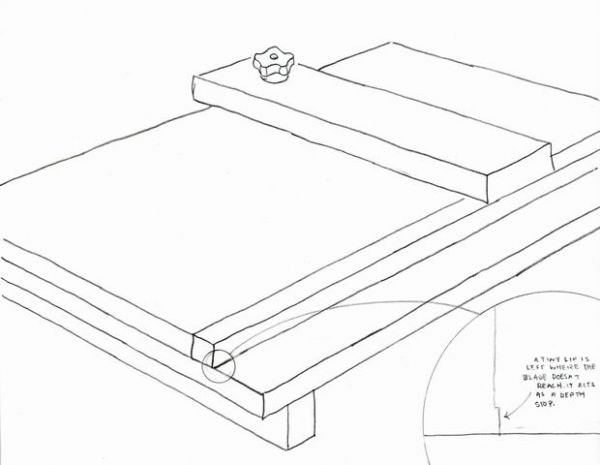 There is one more thing to point out. When you take the blade out, sharpen it, and then reset it in the plane, it almost certainly won’t be set to the exact same depth that it was before. To make things easier on yourself, you should reset the shooting board lip, too. To do that, use a shoulder plane and take a shaving off the runway. The blade on a shoulder plane does extend all the way to the edge of the plane body and so it can cut all the way down into the corner and remove that lip. Then, when you take your first pass with the re-sharpened and reset blade you’ll make a new depth stop and guide.

I get a lot of other questions about the shooting board when I’m at the Lie-Nielsen shows. In the future, I’ll write some more blogs answering them. In the meantime, if you have a question about it or any other part of the article, let me know in the comments section. I’ll do my best to answer it.

Built-in depth stop. Because the iron doesn't cut down into the corner of the shooting board runway, a tiny lip gets cut into it. The lip acts as a depth stop, preventing the plane from cutting further into the board with every pass.