When my niece decided she wanted a few more chickens this past summer, the 25-chicken minimum order was a deal breaker. She so cutely tried to sell us on how nice it is to raise chickens, there was no way we could resist going in on the order. We already had an old dog house on the property and a fenced in area where the previous owners had some geese, so all we needed to do was modify the doghouse and add a chicken wire roof to the fenced in run.

The chickens are about 4 months old now and are quite well behaved. At dusk they all go up the back ramp and roost. We just go say goodnight and close the door. I swear those crazy birds have personality too. One of them (Scarlet) loves to be held and pet by my wife. I’m pretty sure that’s not a normal chicken.

Here’s a quick video tour that may give you ideas on how to build your own chicken coop. I must say I do like keeping the critters – the eggs will just be a bonus.

This coop started its life out as a small dog house. The first step in the building process was to construct a frame that would lift the main structure off the ground. Next, I added a large access door with a small window to the front, and two more hatches on the left side. These hatches allow access to the nest boxes, where the chickens lay their eggs. 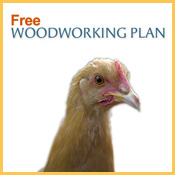 Perhaps the most important element of any chicken coop and/or run is protection against predators. Here in rural Connecticut, we’ve got plenty. Coyotes, raccoons, dogs, and cats, all want a piece of our poultry. So to be extra careful, I actually buried chicken wire around the perimeter of my coop to prevent animals from burrowing into the henhouse.

There’s been a lot of interest in the coop around the office so I’ve sketched out a very basic chicken coop plan. Enjoy. And if you get around to building one, let me know!

This might be Scarlet, or maybe Rose. Those chickens lucky enough to be named, won't ever appear on my dinner plate...but their eggs will.

Inside the coop. A perch like the one seen here is very important to raising healthy chickens. The bedding is generally dirty and birds prefer to perch anyhow. Nesting boxes (seen at left) should only be used for egg-laying.

Ramp going into the run.

Here's a corner of the fenced in area. I used old tobacco drying poles to span the 20' distance to add the wire ceiling.

Here are the ladies who weren't camera shy.

Front view of the coop and run. The old painted rain barrel holds the chicken feed.

Here's a photo of the laying boxes with the top access door dropped down.