Celebrating its 100th anniversary with gala event in August 2006 at the 755 Club at Turner Field in Atlanta, Porter-Cable brought out its self-proclaimed No. 1 fan, Dick Jarmon, who over the years has amassed what might be the largest collection of antique Porter-Cable tools outside of the company. 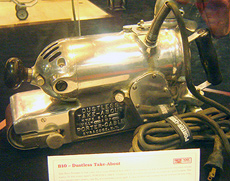 In this video, Jarmon shares his story, which began in 1966 while working in Detroit for General Motors. He took part in a layaway program at a local Porter-Cable distributor and began buying tools faster than he could find uses for them.

“I’m not really big on woodworking, I just love tools,” Jarmon said as he stood watch over his spread of classic circular saws, routers and sanders.

That didn’t stop him from filling every inch of his house with tools dating back to the company’s first in 1906, a pencil sharpener (photo right below). 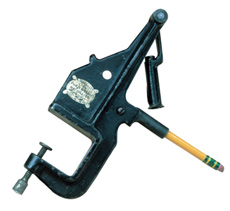 “The pencil sharpener is maybe my all-time favorite because it’s one of two that I know of in the world,” he said. “It was given to me by Art Emmons, who was the chief engineer at Porter-Cable from the 1920s on up to the time Rockwell took over.”

In the past century, the company has manufactured everything from an electric chainsaw to its classic Take-About portable belt sander (photo right above), and Jarmon says he owns at least one of each.

Exactly how many tools is that?

“I can’t count that high,” he said. “And what counts as a tool? If it works probably it’s not much more than 100, if it’s mostly there then it’s a lot of hundreds.”

Summing up his collection, Jarmon said: “Big, immense, and a lot of fun.”