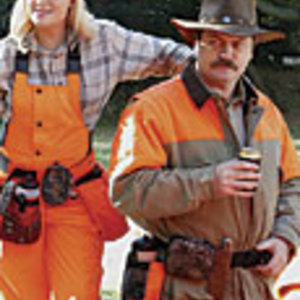 Acting and building have always gone hand-inhand for Nick Offerman. He grew up working on a farm in Illinois. His devilish wit led him to the University of Illinois, where he studied acting and set design. Later, in Chicago, he traded scenerybuilding services for small parts in plays. And those brought him finally to Los Angeles, where he built decks, timber-frame cabins, and Nakashima-style furniture between jobs as a character actor. At age 38, Offerman got his big break as the deadpan Ron Swanson in Parks & Recreation, now in its fourth season on NBC. But when the camera stops rolling, Nick still heads for his L.A. woodworking shop, where he and four part-timers turn out beautiful furniture from big slabs of distinctive wood.