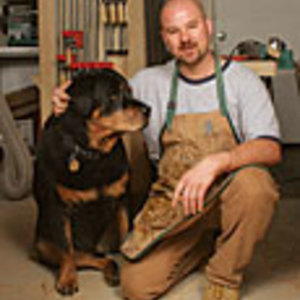 Gregory Paolini began woodworking in high school and found that he had an affinity for the Arts and Crafts style. Originally from Buffalo, N.Y., he and his wife moved in 2006 to a small town near Asheville, N.C., which is becoming a center for woodworkers. They had plenty of company on the trip, in the form of their rottweiler, Stu, and almost a dozen ferrets that Paolini calls his “shop assistants.” Paolini’s home is not far from the Cold Mountain of best-seller and movie fame.