The story behind the project: cypress plate rack

Nancy Hiller shares the backstory of her next FW project; going back to her first professional job as a woodworker in 1980.

The world of plate racks is rich in varied examples — and nowhere more so than among the works of English kitchen designer Johnny Grey. Plate racks are handy for draining dishes and storing everyday dishware. But they can also be decorative objects in their own right.

Historically, they were simple affairs, pared down to basics, such as this Irish example: 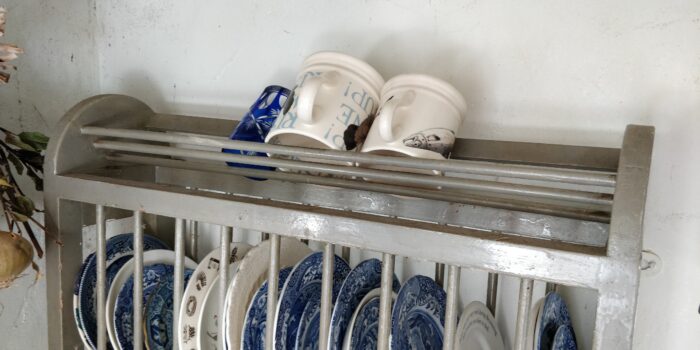 Last week, Senior Editor Anissa Kapsales and I completed a long-delayed photo shoot for an article about how to build the plate rack pictured at the top of this post. It’s a simple piece with lots of hand-cut joinery and will hold a variety of stuff. A number of people have commented on the design following Instagram posts, so I’d like to share the backstory, which goes back to my first professional job as a woodworker in 1980.

When the editors and I were trying to nail down a design for this project article (which is not yet scheduled for a particular issue), we initially thought we’d go with a simple design I made up a few years ago for my book Kitchen Think. Then someone asked about the more elaborate design of the example I made for the kitchen at our previous home. That’s the one we chose.

I wanted to go with this design in part as an homage to my first woodworking employer, Roy Griffiths, from whom I learned a lot about proportions and design, as well as the realities of making a living as a full-time woodworker. I worked for Roy for a couple of years starting in the fall of 1980, after completing my basic training in traditional furniture making through the City & Guilds system.

The first job Roy hired me to build was a dresser top, as he called it—a set of shallow upper cabinets designed after the upper section of a Welsh dresser.

Roy’s design was far more elaborate than any Welsh dresser I had ever seen; a fine arts painter by training, he had also worked in antiques restoration, and his kitchen cabinet designs featured lots of details drawn from Victorian and Edwardian kitchens, pantries, and sculleries. Although I didn’t build any plate racks during my time with Roy, I’ve built a few over the 40 years since.

Roy gave me a proper scale drawing of the dresser top when he hired me for that first job, but this sketch from a later kitchen planning guide he provided customers gives a reasonably good, if rough, idea of the basics.

My first official job was to build this series of upper cabinetry for a kitchen in Fulham, London. I made it in three sections (two narrow sides flanking a wide central section), and I made every detail in Roy’s shop, a frigid, drafty former horse stables behind a Georgian house on the River Nene in Wisbech, Cambridgeshire. Roy ordered the Baltic pine. I took it from there. The doors are all solid, with shopmade molding, and hung on traditional butt hinges. I made the crown molding and beaded backboards, also, to his specs—he’d had knives custom-ground for his shaper (spindle moulder, in the U.K.). The shelves had a sweet thumbnail bead on their front edge. The drawers were dovetailed, though not by hand; Roy had an ancient dovetailing machine that he’d bought second- (or third- or fourth-) hand, as with most of his equipment.

Roy forbade me to cut joints by hand on the grounds that doing so would take so much time we’d both lose our shirts. He had a single-end tenoning machine that I used for tenons, and some of the partitions were simply housed, then reinforced with nails in cases where the grain was all running in the same direction. This was long before the advent of Domino fasteners and even biscuits. But for this article in Fine Woodworking I wanted to incorporate the kind of joinery that befits the magazine; it also makes the project a good piece on which to practice dovetails and through-tenons.

I finished the piece with Osmo 3041, which will keep the look relatively pale, partly because I love the look of natural cypress and partly in view of my physical condition—the cumulative effect of having been on one sort of chemotherapy or another for most of the past year has reduced my energy, and I wanted to keep the finishing, at least, simple.

For those wondering about the short grain where the arches meet the decorative spindles, those cuts do have to be made with care. The spindles are centered and held in place with short pieces of 1/4-in.-dia. dowel, but they are not glued; the idea is to allow the frieze to shrink without increasing the risk of a split. On Roy’s dressers, the Roman arches were individual pieces stub-tenoned into vertical dividers that ran from the back of the shelf (and top) to the front, a detail I changed here (along with many others) because I find the top shelf more practical for storing things when its entire width is available, rather than broken up into cubbies.