From the Bench: Boxes left behind

Nolan Harris finds a precious legacy in the toolboxes of his grandfather and great-grandfather.

I dropped out of college when I was 22 and told my parents I wanted to work in construction. My parents, realizing I was a bit more lost than I knew at the time, convinced me to go back to school and complete my English degree at UC Santa Barbara. Two years later I had a teaching credential and was teaching sixth grade in a middle school in northern California. Summers and breaks came and I put away my teaching supplies and picked up my toolbelt. I built decks and such, did some handyman work to offset my rent at the apartment my wife and I shared, and continued that way for a couple of years.

Housing prices in Marin county where I was living prompted a move back to my native southern California. My wife and I ended up in San Clemente in 2001 with a plan to buy and sell homes and eventually purchase a home of our own and get me back to teaching. Teaching jobs were tight but there proved to be a need for construction services. I built a deck for a home we were renovating and the next thing I know I was building a deck for a neighbor.

Two years later I started Riviera Construction in San Clemente and I have never looked back. 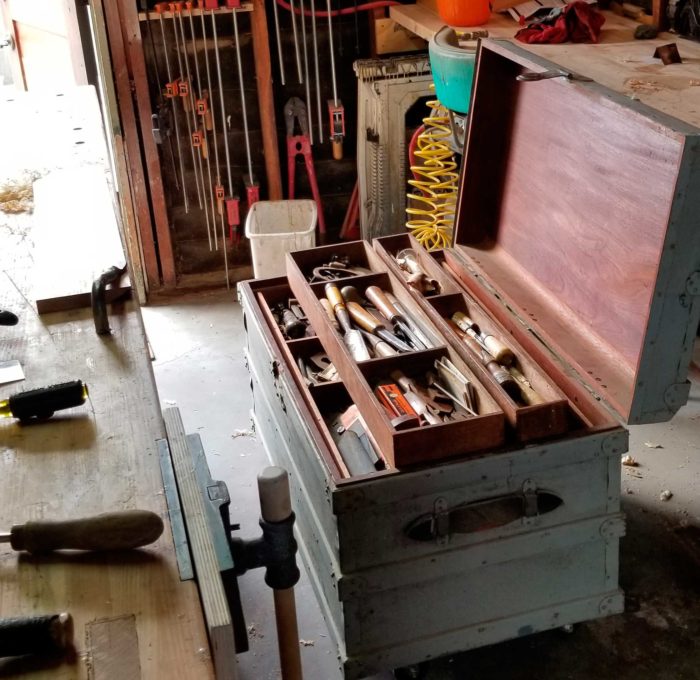 Since then I have lost both my parents. But after their passing, I inherited the most magical of gifts. My dad, a young boy during the Great Depression and a veteran of World War II, was the first in his family to go to college. He spent his career as a small animal veterinarian. My dad was also a builder during his time off—I spent many weekends of my youth with him and my brothers building a home on our family ranch. My parents had once convinced me that construction was not the right path for me but my heritage drew me back to working with my hands.

My dad’s father was a shop joiner on the Mare Island Navy Yard in Vallejo, Calif. His dad, George, my great-grandfather, was considered a master joiner at that same yard.

After my mom passed away last year, I convinced my brothers that I would take the tools left by my grandfather and great grandfather. Locked away in a barn for more than 60 years were their toolboxes. As a self-taught woodworker myself, I was delighted to spend hours with these boxes, cleaning the rust off the tools and trying to figure out what many of them actually did. These tools date from the mid 19th century to the early 20th century.

I was struck by the differences in our work processes. In my work today, a router has replaced more than dozen handplanes, my compound miter saw and tablesaw have replaced a half dozen handsaws, and power drills have replaced the hand crank versions.

But more than anything, I was struck most by the beautiful boxes built by my forefathers. My granddad’s tool box was a decent copy of my great grandfather’s. George was truly a craftsman, but to understand you have to get past the battleship gray exterior (with the certain lead-containing paint). Opening his box reveals the beautiful smell of genuine mahogany and old tools. A series of well-designed, dovetailed trays slide back and forth allowing full access to the bottom of the chest. It is obvious that many of the tools have been moved around and some pilfered by my granddad and many others (including me over the years), but what does remain is perfect art. Planes, chisels, and gouges were all left sharp and without nicks. Files and rasps were in perfect condition. Considering the extreme neglect this box faced, it is nothing less than an absolute tribute to the master craftsmanship that went into the box that these tools survived as well as they did.

After many hours spent with these new boxes and my “new friends,” as my wife calls them, I am learning to know two men I never had the chance to meet in person. Their lives and careers give validation to my decision to spend my life working with my hands.

And I began to realize that these boxes survived all these years without being discarded because they were simply too special. And I also realized that, in a way, all you are left with as a craftsman are the boxes you leave behind. I became completely inspired to build each of my boxes better, be it a cabinet, a room addition, or a piece of furniture. What box will you leave behind? Be careful with the boxes you build, because those who follow us will be watching.

Nolan Harris is a general contractor in San Clemente, Calif.