It’s common to get furniture design inspiration from the furniture of other designers, but if you want to expand your design horizons, try an alternate approach

Synopsis: It’s common to get furniture design inspiration from the furniture of other designers, but if you want to expand your design horizons, try an alternate approach. Jennifer Anderson teaches her students to find design inspiration in the objects around them, whether art, architecture, plants, or even textiles. As an example, she shares the design process she used when taking inspiration from the folds of a pleated dress.

Nothing is more daunting to a woodworker than a pristine piece of white paper. And when it comes to design, we often fall back on reproducing work that already exists. This makes sense from the standpoint of learning techniques, like when a painter re-creates the Mona Lisa or a sculptor copies Michelangelo’s David. To translate this example from fine art to furniture making, think of a woodworker who recreates a Sam Maloof rocker. often regarded as the pinnacle of woodworking, a Maloof rocker offers the craftsperson an education in a bevy of woodworking techniques.

But once you have a grasp on technique, where do you go from there? Most woodworkers look at other furniture for inspiration, taking the shape of a leg from one chair and the crest rail from another, or appropriating the top of one table and putting it on the base of another. when the stars align, the result is a functional object that is pleasing to the eye. But often the result just misses the mark. we’ve all been there.

A fresh path to inspiration

When I teach furniture design, I steer my students away from the cut-and-paste tactic by offering a variety of alternative approaches. one of my favorite methods is to find inspiration in all objects. Art, architecture, plants, animals—anything from our everyday surroundings can be a rich source of inspiration. A good example of this methodology is a series of pieces I made where high-end fashion served as the spark.

While browsing through a newspaper, I came across the 2009 collection of fashion designer Zac Posen. I was blown away by the sculptural form of the arms and neckline of a dress, which were created by pleats. I immediately began thinking of furniture, and more specifically, how the soft folds of fabric might translate into a hard material such as wood. In that brief moment, without intention, inspiration was gleaned and the design process begun.

Sketch the spark into reality 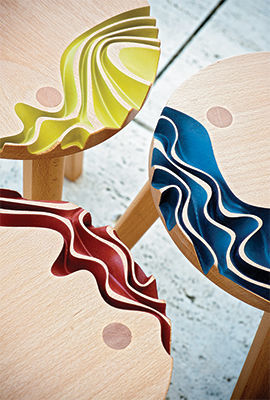 With the dress as a reference, I began to sketch. one sketch led to another until I enlarged the shoulder and upper arm portion of the dress using a grid transfer technique. drawing by hand allows you to discover information about an object that would otherwise be lost. As you draw, you become conscious of the object’s attributes: repetition, geometry, symmetry, asymmetry, texture, color, and pattern. When I connected my hand and eye to draw the dress, I discovered that the repetitive peaks and valleys and gentle sweeping curves of the pleats created a visual movement I wanted to capture in my furniture.

From there I began researching other sources of inspiration with a similar aesthetic, such as icebergs, running water, and mushroom gills. Those images became sketches and those sketches led to more sketches. I drew the entire object, enlarged portions, colored some, until the curves, peaks, and valleys eventually found themselves incorporated into furniture forms.

Whether it’s a Sam Maloof rocker or the pleats of a dress, inspiration can come from anywhere at any time. Our goal should be to remain open to it and harness that inspiration as it comes, and then turn it into the best work we can make. 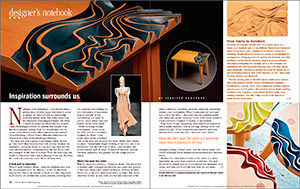