A kitchen tansu seen in Japan inspired Fox to combine sliding doors and drawers in his tall dresser. The design process starts with a sketch, then evolves to a full-scale mockup and eventually the dresser itself.

For me, design evolves slowly. I am not enamored of newness. Instead I use a familiar vocabulary of line and form that I attempt to refine within each piece. My goal is to make furniture that is functional and elegant and helps create a quiet, centered, contemplative environment.

When I designed this piece, I had it in mind to build a dresser with a not-so-typical front elevation. Originally I was thinking of a long, low piece but in the end I went for something tall. The idea of mixing sliding doors with drawers was inspired by seeing kitchen tansu on a trip to Japan. To my eye the combination creates a very interesting visual rhythm. The doors also gave me a chance to add texture to what is usually a large, flat surface. And people find them very inviting. Almost everyone who sees this piece opens or at least touches them. They make the dresser somehow less formal or standoffish.

I arrived at the size and location of the doors by playing with the different elements of the front on paper. I made the three lower drawers all the same size, rather than graduating them, since I felt there was already plenty going on in the piece. The dresser stands just over 4 ft. tall, so one can see over and around it, which helps keep it feeling friendly and intimate.

I want the dresser to have a solid but graceful transition to the earth. This imparts a certain sense of stillness. But I also want the piece to have lightness and delicacy. The legs taper slightly wider at the bottom to give the dresser a solid stance, and I hope the taper adds to the lightness of the piece and keeps it visually tall and narrow. The legs are proud of the sides, which makes them look less massive and emphasizes the length and narrowness of the side. To me, the strong vertical lines of the sliding doors add another element of lift. Of course the shaping of the top also imparts lightness to the dresser, as does the small reveal below the top, which adds interest and makes the top float.

The process I use for designing a piece of furniture is one I learned from a friend and fellow furniture maker, Craig Stevens, who studied under James Krenov. Usually I start with a sketch. Given my drawing skills, this is very rough. But it is enough for me to visually understand what I am working toward. At this point I am only thinking about form. I try not to think about construction details. I work with a 5b pencil in a bound notebook; no erasing allowed. Next I draft the sketch in scale. If it is a commission, I do a simple single-point perspective drawing for presentation and to be sure that the idea is in keeping with real-world parameters.

Finally I do a full-scale mockup. This is where I work out the fine details of curves, tapers, shadowlines, reveals, etc. I use whatever material is available, easy to use, and cheap—blue foam, cardboard, wood scraps. During the mockup process it is important not to get married to a certain design element or detail. After all, that’s the point of the mockup.

The mockup sits where I’ll see it as I enter the shop, and I keep working on it until my initial impression, when I walk in, is that the design is spot on. At that point the mockup becomes my shop drawing; as I build I take all my major measurements from it. Occasionally I’ll need to sketch out some complicated joinery, but usually I just need a few notes. 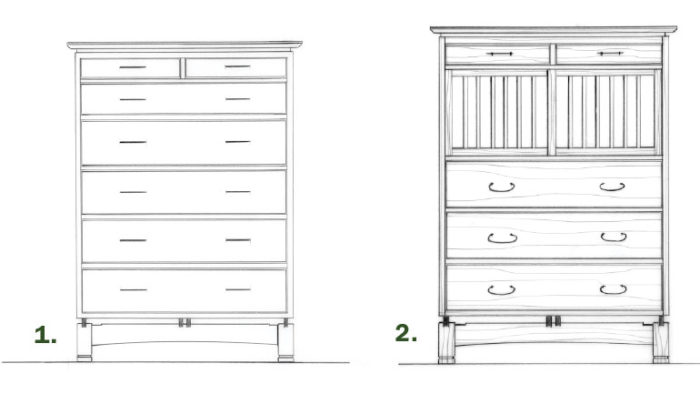 Fox presents his design ideas to clients in one-point perspective drawings, each a well-resolved concept. His third drawing here includes nearly all the elements in the final piece, though he adopted the proportions of the sliding doors in his second drawing. His overall aim was to make a piece that felt light yet rooted. 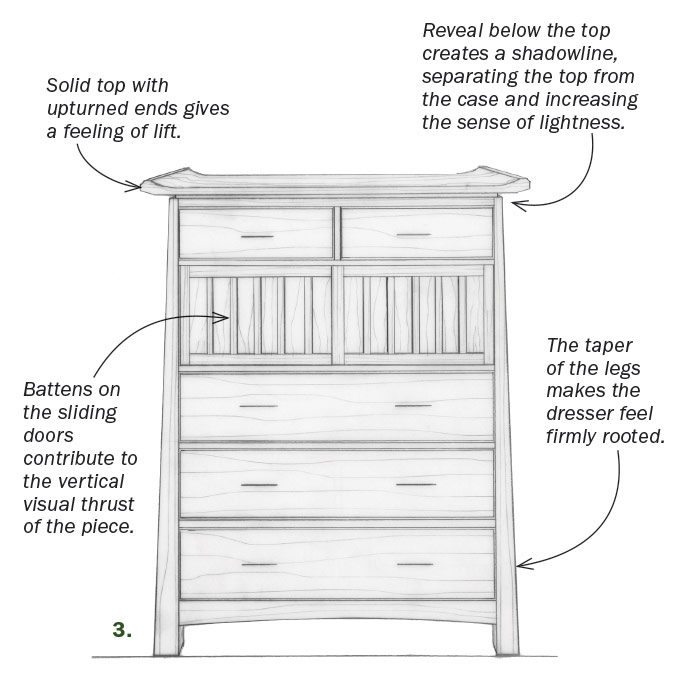