George enjoyed that there was some intellectual activity along with the handwork.

Synopsis: Jonathan Yarnall has been working at George Nakashima Woodworkers since 1974. Here, he shares some memories of working for, and with, a legend.

While I was away at college my father moved his one-man architecture office from Philadelphia out to rural Doylestown, Pa. And one time when I came home for vacation, he took me with him to George Nakashima’s place in nearby New Hope. I remember George from that encounter as very quiet, and I felt a certain peacefulness on the property. After college I came back to Pennsylvania and knocked on the door to see about a job; George said I could start in two weeks. There was no formal apprenticeship in furniture making; I just began to work.

I started in the finishing department, and then to my great good fortune in 1974 the last building George would build on the property was about to commence, and I had the privilege of working on it alongside Robert Lovett, a consummate craftsman. It took us two and a half years. George would come out several times a day to see how we were doing. There were no time constraints and there was no master plan; no drawings, per se. When we couldn’t go any further he would do some freehand sketches.

I remember noting the way George carried himself; his walk conveyed a dignity that was remarkable. It was something you don’t often see in our culture these days: a person with poise—a perfect balance between one’s outward life and inward life. I considered it an honor to work for a man of that caliber.

But shortly before we finished the building I told George that when it was done I would be leaving. There were economic pressures, and I had agreed when a friend asked me to start a construction business with him.

As I thought more about it, though, I realized I wanted to stay. So then I had the difficult task of approaching George and informing him that I had changed my mind; asking if it would be possible to stay. When I did he was very cold. He didn’t appreciate the wavering. He said he’d let me know. Days went by.

Eventually he said, very abruptly, “You can stay. We’ll find something for you to do.” And then, “Go help Adam.” 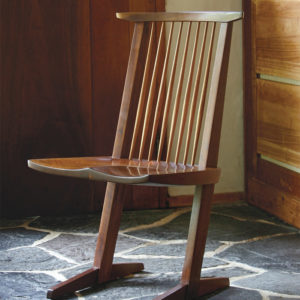 Adam Martini, a craftsman who was born in Yugoslavia, displaced during the war, and trained in Austria, ran the Nakashima chair shop. “Go help Adam.” That was 43 years ago, and those were my last instructions from George. I’ve been in the chair shop, happily, ever since. For the most part it was just Adam and me in that little shop for 25 years until he retired.

George designed a few new chairs after I started, but most of the chair designs were already established, so he didn’t have to be involved with every chair order the way he was with tables and cabinets. Still, he would come through the chair shop several times a day. I think since he wasn’t doing any benchwork—probably hadn’t since the mid-’50s—he got vicarious enjoyment seeing that we were enjoying ourselves at the bench. George was Samurai, and he had been pretty tough on the men who worked for him in the early years. But by this time he could rest a little easier. The big fight was over. He’d established himself, it was running, and he was mellowing a little bit.

Also, the three of us had something of a philosopher’s club. Adam was free-thinking and very much a seeker, as was George, of course. We would often discuss what we were reading, topics of the day, or philosophy, religion, politics. George enjoyed that there was some intellectual activity along with the handwork.

I think he had hopes for everyone who came here to work. As woodworkers, but also as to the yoga, the spiritual method that he was establishing. And I got it, but it took a while. When I realized what it was, and how fathomless it was, and that one lifetime wouldn’t nearly exhaust the potential here, then I dug in, and that question of finding another path was no more a question.

And that didn’t depend much on emotion. It went much deeper. It had to do with the yoga. Yoga being yoke, the union with the divine and with all creation. I’d say it was so deep you couldn’t even talk about it. I knew what he was trying to do; and that was what I wanted to do. Woodwork just happened to be the vehicle. He left me room to pursue it without much criticism, without much direction. You’re here, there’s work to be done. Adjust to the work, the schedule, the business; establish your relationship with the wood. Let the wood work on you while you work on the wood. Find the soul of the tree. Let the wood teach you how to forget yourself and connect with its soul.
I think George wanted to live and work like a tree. You’re rooted; your leaves are in the heavens; bloom—if you can, flower, bear fruit. Join the earth and the celestial. Adjust to the seasons. Be stable; bend with the wind. Aspire; reach for the sun. 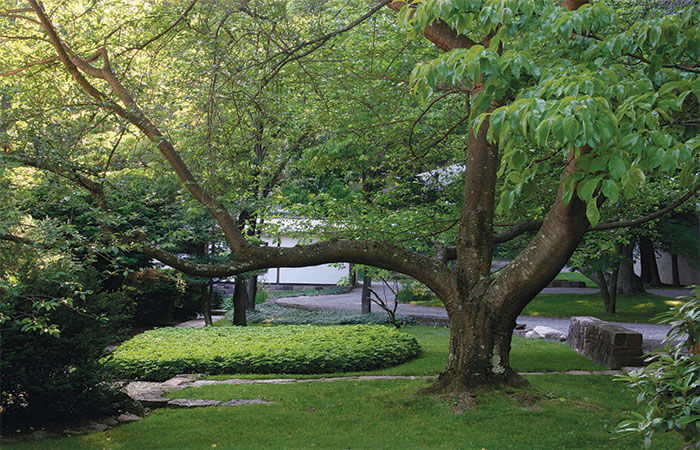