I’ve been using small power feeders on my router tables for close to 20 years, and using them has revolutionized the quality of pretty much everything I do with a table-mounted router.

Recently we received a great question from a reader for Rollie. If you have any questions that you’d like answered by Rollie, send them to [email protected]. -Ben

Hi Rollie,
I read your review of the cast-iron router tables from General/Excalibur. I now have three of them. Love them. Would it be feasible to mount a power feeder to them? I think it would help me with the quality of my raised-panel doors and moldings. Is the cast iron thick enough to drill and tap?
Thanks,
George
Ostrander, Ohio

P.S. The first boat I ever built also sank. Mine was a Revell plastic model of a World War II battleship that I had put together. It went down in the family bathtub, fortunately in only 3 in. of water.  I was able to salvage it. I liberally smeared Vaseline on the hull in an attempt to make it watertight. No luck. I put in dry dock up on a shelf. I later used it for gunnery practice with my trusty Daisy Model 1894 Lever Action BB gun. Being a kid was fun!

Hello George,
Thanks for the great questions! I’ve been using small power feeders on my router tables for close to 20 years and using them has revolutionized the quality of pretty much everything I do with a table-mounted router. I usually use a small Delta power feeder with an infinitely variable speed control. Delta doesn’t sell it anymore but General (20-100), Grizzly (G4173), and Shop Fox (W1746) still have it. The speed control is important because it makes it easy to find the sweet spot where the material is fed fast enough to keep it from scorching and slow enough to keep from overloading the router motor. To get the correct feed speed, I run a piece of scrap that is the same species and same thickness under the feeder set at the slowest feed rate. As the piece runs past the router bit, I increase the feed speed until I hear the router motor start to slow. Then I back off the speed to keep the router at full song. Do this slowly so the router motor has time to adjust to the feed change. Make sure you have the router speed set at the appropriate rpm for the bit you are spinning (most bit manufacturers list the optimum speeds for their bits on their websites or in literature supplied with the bit … which I always seem to throw away). 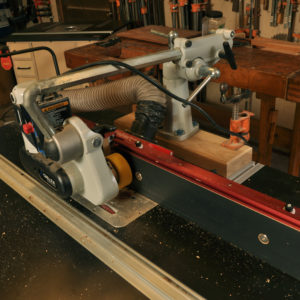 The benefits are several. First is the safety aspect: The feeder keeps your hands away from the router bit and practically eliminates kickback. Next is the quality of the molded surface: Cuts-per-inch are consistent along the length of the stock, resulting in a uniform surface texture, and the stock is held securely to the table and fence, creating a very accurate and consistent profile. And finally the feeder takes away the need to physically push the stock past the cutter, which can be a chore with long or narrow material.

If the router bit removes a lot of material, say for example a raised-panel bit, make the cut in several passes. Take about half the waste on the first pass. On the second, cut to within 1/16 in. of the finished profile. Then make a final cleanup pass. The results will be outstanding.

As far as mounting the feeder to your cast-iron table goes, I don’t think it will be a problem. The cast iron on my Excalibur table appears thick enough to drill and tap. Make sure you use a substantial bolt, preferably 3/8 in. I have my feeder mounted to a hardwood block that allows me to clamp the assembly wherever it works best, front of table or back, left side or right. The pressure exerted from the feeder isn’t high, so clamps will do a fine job of holding it in place and this also makes it easy to move the feeder between router tables. 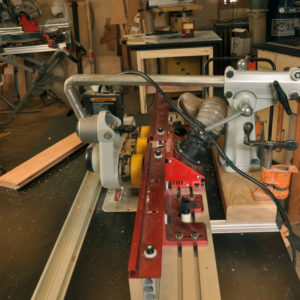 My boat eventually floated with a modified motor mount and the judicious application of caulking, but after one season it was relegated to storage as four-wheeled conveyances (and a driver’s license) took over my personal transportation, and entertainment, needs. And you’re right, it was fun being a kid, especially when we were trusted with potentially dangerous toys. It was exciting. Maybe that’s why we like power tools so much. We have to grow old but we don’t have to grow up.