Spalt Your Own Lumber: What’s In A Name?

It’s been quite a while since my last post, and I apologize.  Spalting has really taken off here in Canada, and I’m up to my ears in research and development.  I haven’t even made it into the field this year to do any collecting!  So a big thank you to a concerned spalter who brought today’s issue to my attention.

A rose by any other name…

…would probably smell as sweet, but if you called it something like ‘African beauty blossom’, would probably cost twice as much.  Consumers like to purchase neat sounding items, especially if they are billed as unique.  Unfortunately for the numerous entrepenuers out there, spalting isn’t rare, isn’t hard to induce, and unless you get into a lot of the pigments, more or less looks pretty much the same.

So how does one market standard zone line spalted wood?  Apparently people have begun thinking up new names for spalted wood, and attributing the spalting to other phenomenon.  You’re probably familiar with the more common renamings, like ‘ambrosia maple’ (there is no ‘ambrosia maple’ tree species….that name refers to the staining type, which is still just spalting), but several new ones have cropped up over the past few months. My new favorite, and the one that prompted this post, is the ebay favorite ‘fire-stained maple’.  A concerned spalting enthusiast sent me a link to an ebay auction describing this incredible new spalting phenomenon, asking if it was for real.  So let me be very clear: there is no such thing as ‘fire stained maple’, no matter how much you might want to believe that fungi somehow can interact with fire to spalt better.  Fungi and fire don’t mix.

What is ‘fire-stained maple’?  Well, from looking at the photos, it looks like figured maple (crotch, root ball, etc section) with heart rot, and by that I mean spalting in the heartwood, not the sapwood.  Heart rot is very common, and its occurence in this tree probably made the tree more susceptible to fire damage, since the heartwood provides the structural support for the tree.  But the fire in no way cause the spalting.

Ummm…Why Does The Name Matter?

I have minor issues with renaming spalting, just because it leads to confusion on an already poorly understood topic.  What bothers me more is after something is renamed, people seem to feel a need to support that name by giving a bogus background story.  I’ve been researching, making, and selling spalted wood for years and yes, part of me would love to call pink stain something awesome, like ‘Flaming Lips of Heaven’ 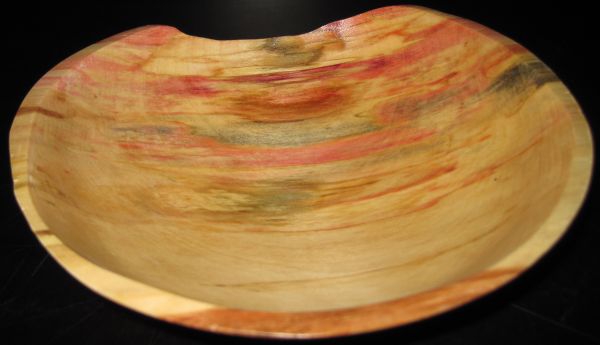 Flaming Lips of Heaven.  This stain occurs when angels touch freshly fallen aspen with their firey swords.  Come on, you know you want to pay twice as much for this bowl now that the stain has an awesome name and story.

but I don’t, because the last thing I need is yet more confusion over what spalting is and isn’t.

Time To Clear Things Up (Again)

Spalting is pigment and bleaching on wood (including black lines) cause by a fungus.  It has nothing to do with angels, fire, or luck.  Insects (ambrosia beetle, I’m looking at you) do not cause spalting, although they do occassionally vector fungi into wood that will cause spalting later.

Not all tree pigments are related to fungi.  Some trees produce their own pigment in response to stress or wounding, like is commonly seen in boxelder (Manitoba Maple): 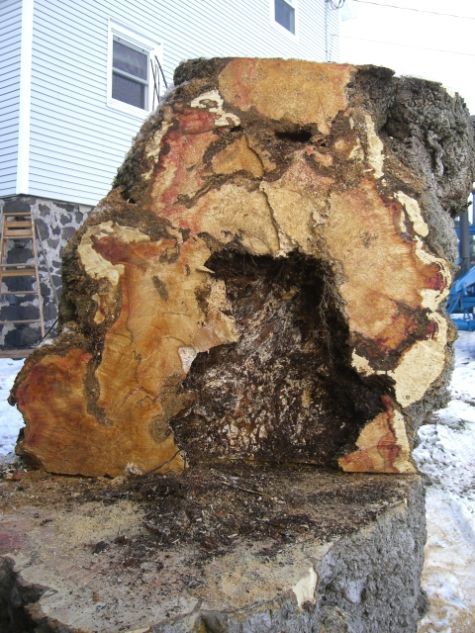 If the stain occurs primarily at knots, burl section, or areas of injury, its not a fungus, its the tree.  And those are your two options, my friends, in terms of wood stain in standing trees.  Of course, there are a whole mess of stains that can happen once the tree is down, but fungi and host response are the two that happen while the tree is still standing.

So when buying spalted wood, take names and back stories with a grain of salt.  If the seller insists that what you have in your hand is some sort of mystical spalting artifact that may never be created again by nature, take a photo and send it to me so we can have a good laugh about it.  Just keep your wallet closed and go read some back issues of this spalting blog.  Remember – you don’t have to pay for it, its really easy to spalt your own wood at home!

Despite my best efforts, do you STILL think fungi are going to kill you?  If so, check out this post.