Who Begot Who? Comparing Planes from Lie-Nielsen, WoodRiver and Stanley

Woodcraft, the Parkersburg, West Virginia company that sells woodworking tools by mail-order and through a national network of retail stores, recently introduced a new line of planes under the WoodRiver name. These planes, made in China, have generated a lot of interest and debate on Knots, our online woodworking forum. You can find a review of WoodRiver planes by Chris Gochnour online and on page 20 of our July/August 2009 issue.

Seems a lot of Knots posters think the WoodRiver planes look too much like those built by Lie-Nielsen Toolworks, makers of top-quality bench planes, and founded over 25 years ago in Maine by Tom Lie-Nielsen.

But, a number of other posters suggested that both Lie-Nielsen and WoodRiver planes have a common ancestor in the Bedrock planes made by Stanley from the late 1890s until the early 1940s. Those posters are correct. Indeed, both makers state in their catalog that their bench plane designs are rooted in the original Bedrock.

To add some perspective to the story, I put three No. 5 planes side-by-side; an old Stanley Bedrock, a Lie-Nielsen, and a WoodRiver. A quick glance at them suggests that there aren’t a lot of differences between the trio.  But a closer look using a ruler and caliper made some of the differences clearer. (see Chart below).

With the measuring tools in hand, it became obvious that Lie-Nielsen made several improvements to the old Bedrock. For example, a look at the No. 5 shows that the sole and side walls are thicker than the Bedrock. Also, Lie-Nielsen introduced some current technology by using stress-relieved ductile-iron for the casting, with manganese-bronze as an option. The blade is thicker and made from tool steel, with an A-2 steel blade as an upgrade.

Then, too, a few years ago, he improved the chipbreaker, making it thicker to help reduce blade-chatter. And, he added a shallow lip on the business end, ground to a 1º angle, to help ensure gap-free contact.

Interestingly, the WoodRiver plane also has a thick sole and side walls. And, it has a thick blade like the Lie-Nielsen, and a similar stepped chipbreaker. 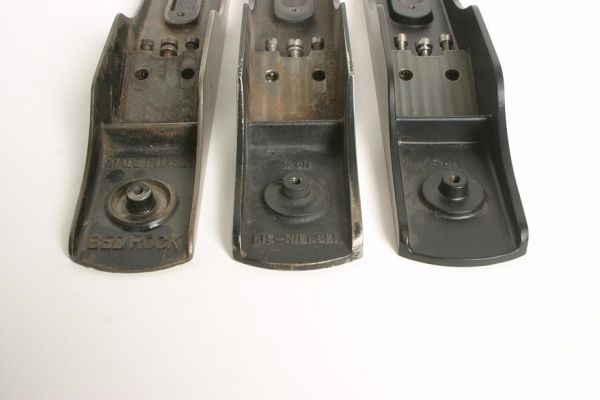 At the back of the body casting, the Lie-Nielsen wood handle mounts to an elongated boss. On the Bedrock, that same detail is somewhat different. But, on the WoodRiver, the boss nearly matches the Lie-Nielsen.

Also, when it comes to the frogs, the one on the WoodRiver is closer to the Lie-Nielsen version than to the Bedrock. 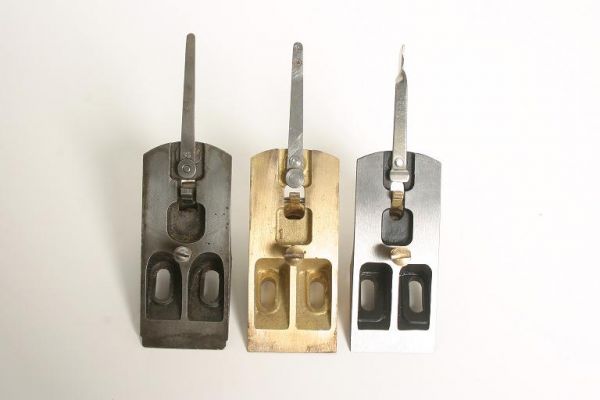 So who begot who?

For sure, we know there’s Bedrock DNA in both Lie-Nielsen and WoodRiver. And, based on my side-by-side look, it appears there are Lie-Nielsen genes in WoodRiver.

Copying is not new or unique to the tool trade, nor is having tools made in China to reduce cost. It’s up to each of us to decide just how comfortable we are with those facts of life.