After much anticipation and several missed release dates, SawStop is finally ready to introduce its version of a 10-in. contractor’s saw. It has the same blade safety-brake and riving knife found on its big-brother cabinet saw, but at a base price of $1,499 versus around $2,800 for its 10-in. cabinet saw. (More price information at the bottom of the article). The saw is scheduled to be available in June 2008, but I was able to test a pre-release sample. (See a video tour of the SawStop contractor’s saw.)

The new SawStop is a true contractor’s saw, with the motor hung off the back and the trunnion assembly mounted to the underside of the saw table. But unlike other contractor’s saws, the arbor and blade-raising mechanism on the SawStop are completely redesigned to incorporate the brake and riving knife. That said, the saw looks like and works like a conventional saw. It accepts any conventional 10-in. blade or 8-in. dado set.

The fit and finish on the saw were excellent. It went together easily and the assembly and operating instructions were the best I’ve ever seen on a woodworking machine. The manufacturer conveniently separates assembly hardware into a dozen color-coded packages, each one keyed to the assembly instructions.

The tilt and blade-height handwheels worked smoothly. Blade-to-slot parallelism was a very tolerable 0.002-in. over 8 in., and there was no runout of the arbor flange.

At the insert opening, the tabletop had a crown of 0.011 in. when I first examined it. (Hybrid saws and cabinet saws tested recently all had suitably flat tables.) Rather surprisingly, when I rechecked the table’s flatness after we had run test cuts and fired off the brake mechanism two times, the top had settled down to a much more reasonable crown of only 0.005 in. A sharp blow can sometimes snap warped cast iron back into flatness, and I suspect that firing the brake cartridge did exactly that.

In use, the saw cut well, with the flat-belt drive proving to be smooth-running. Switching from the small riving knife to the full blade guard with pawls and a clear plastic cover requires no tools and takes just seconds. All saws should have such well-designed guards. 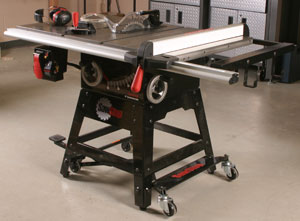 Well-designed features. SawStop contractor’s saw has an easy-to-use aluminum fence, excellent dust collection, and a riving knife as well as a full blade guard. The version we tested comes with cast-iron wings and a very convenient mobile base.

The motor, rated at 1-3/4 hp so it can run on any household (15 amp) circuit, had sufficient power for ripping 2-in.-thick maple, although it could be bogged down when pushed especially hard. Under the table, to improve dust collection, the blade is enclosed in a plastic shroud that has a 4-in.-dia. dust port. When cutting, the saw captured what I estimated to be about 95 percent of the sawdust.

As tested, the saw has a sturdy but lightweight all-aluminum fence, similar to the ones found on many benchtop machines. The fence locks at both the front and rear of the saw, a design I prefer because it’s less likely to flex during a cut. The fence was easy to adjust for parallel and worked and locked very smoothly. You can get a conventional Biesemeyer-style fence as an upgrade.

The model we tested has cast-iron wings and a mobile base, but the lowest-priced base-model has stamped-steel wings and fixed legs with levelers. The mobile base is a well thought-out and sturdy mechanism that easily and smoothly lifts and lowers the saw with a simple pedal mechanism.

To test the brake mechanism, we ran a hot dog into the blade two times, once with a regular blade and once with a dado-blade stack. In each instance the mechanism fired flawlessly and the hot dog’s skin showed only a tiny scratch. Once the brake is fired it must be replaced with a fresh cartridge and the blade needs to be either tossed or repaired because it will have three to five damaged teeth. Replacing the cartridge is about a five-minute job that, while a bit awkward, isn’t difficult.