Synopsis: The introduction of Festool’s Domino revolutionized the way Tim Celeski makes furniture. This handheld mortising machine has a spiral bit that plunges into the wood to create a mortise with round ends. You cut a mortise on both parts of the joint, and use a ready-made slip tenon, which Festool calls a Domino, to tie the two parts together. Celeski loves the joint for both its strength and  how quick it is to use. And when he combines the tool with a simple jig, he finds it even more useful.

Because of its strength, the mortise-and-tenon is one of the most important joints used in furniture making. It’s perfect for connecting table aprons to legs, the rails and stiles of a door frame, and chair stretchers to legs.

Through the years, I’ve learned to cut the joint with a variety of techniques and tools, from backsaws and mortising chisels to bandsaws, tablesaws, routers, hollow-chisel mortisers, and manufactured joinery jigs. These tools and methods can work well, but I always thought they involved either too much finicky setup or a lot of test cuts (both in some cases) to produce a snug-fitting tenon with tight shoulders and flush faces.

That’s why I was excited when Festool introduced the Domino, a revolutionary handheld mortising machine, in 2007. The tool has a spiral bit that plunges into the wood to create a perfect mortise with round ends. You cut a mortise on both parts of the joint, and use a ready-made slip tenon, which Festool calls a Domino, to tie the two parts together. It’s a very strong joint, and best of all, the Domino is much faster than any other mortising technique I’ve used, requiring very little setup to get perfect joints.

The Domino has changed not only how I cut mortise-and-tenon joinery, but also the way I design furniture. Because I know that any two parts that touch can be joined with a Domino, I let my creativity run free without worrying about the joinery.

I’ve learned over the years that if you combine the Domino with a simple jig, you end up with a very powerful tool, capable of making accurate joints quickly and repetitively without error. Here I’ll share the jig and my techniques for using it, along with some basic tips.

For furniture making, get the Domino XL

There are two different Domino models: the DF 500 ($765) and the larger XL DF 700 ($1,250). Each one has a spiral bit that plunges into a part to cut the mortise to depth. At the same time, the bit moves from side to side. The result looks very much like a mortise made with a router. But with a router, you must move the tool to create the mortise width and take multiple passes to reach the final depth. The Domino does both at once.

The two models have a similar fence that can be adjusted to change the slot’s location on the part’s thickness, and tilted to adjust the angle of cut. This allows you to cut a mortise square to a beveled edge or mitered end, for example.

The major distinction between the joiners is the sizes of mortise that they cut. 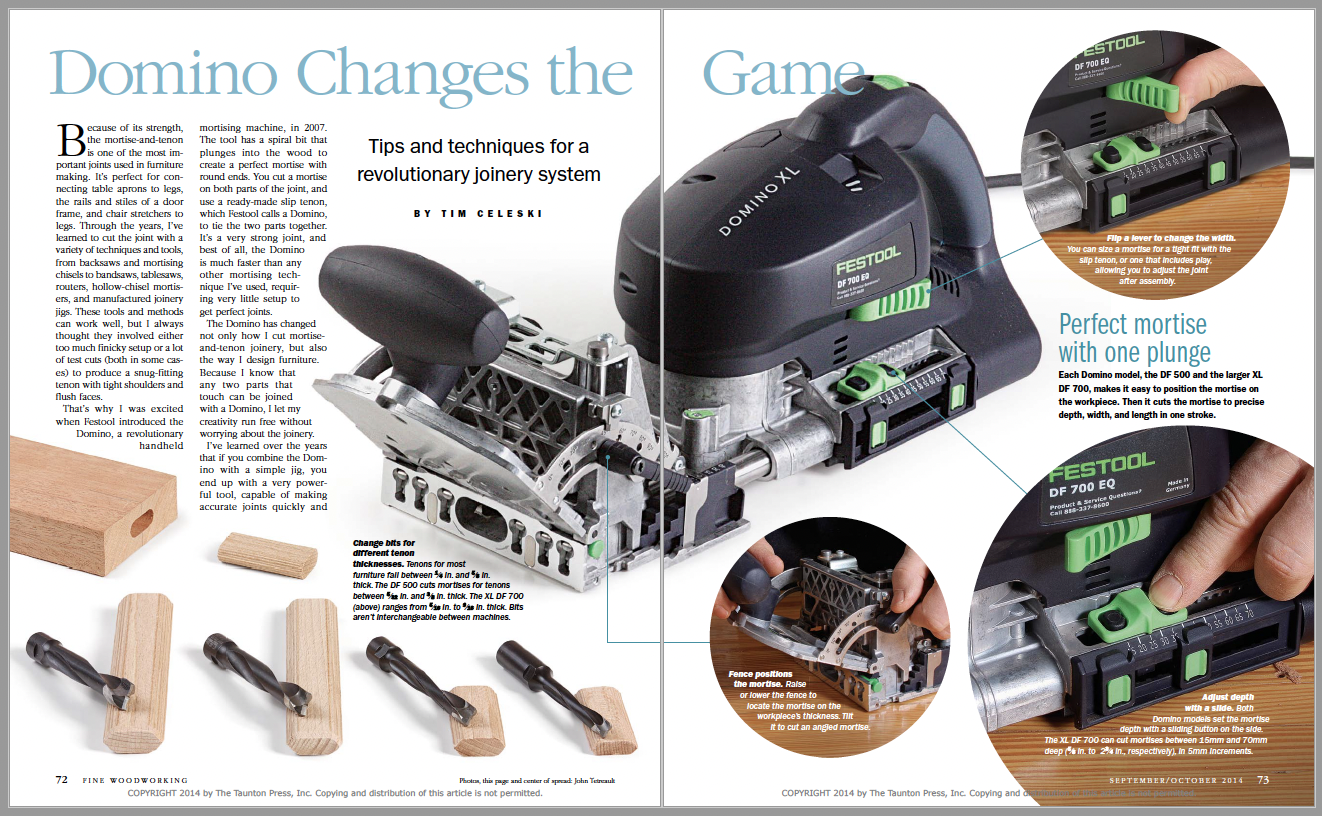 Sign up for eletters today and get the latest techniques and how-to from Fine Woodworking, plus special offers.
This site is protected by reCAPTCHA and the Google Privacy Policy and Terms of Service apply.
See all newsletters
View FREE Project
when you enter your email address below.
View PDF
X
X
Previous: Domino System Makes Joinery Fast and Easy Next: Get Perfect Reveals with a Domino