One hand plane to rule them all for power tool woodworker? 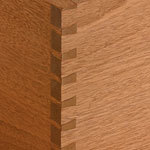 I’m primarily a power tool woodworker, but looking to find a hand plane to help me flatten panel glue ups. Primary night stands, coffee tables (my current project) and smaller pieces, though perhaps an occasional bench or table, but those would probably be exceptions and not the rule. I’d also like something that I can come in after my scrub plane and flatten boards that won’t fit on my jointer so I can get them into my planer.

I’ve been watching a lot of Rob Cosman and thinking maybe a no. 5 1/2 would be a good all around compromise, but I’m also toying with the idea of a no. 4 or no. 4 1/2 and a no. 6 might be a better combination in the long run since I’d also like to get my sanding down to a minimum as I do prefer planing in these instances. I’ve read a no. 6 is a nice plane for a shooting board as well which is something I would also like to try at some point.

I find the number of bench planes rather dizzying and I’m not that interested in owning more than 2-3 at the most (at least for now…) The no. 5 1/2 seems like a good compromise for general purpose tasks like smoothing, flattening, etc…, but I can’t help but wondering if having a smoother and fore plane would be more versatile for my needs.