November of 2019 marks 100 years since the founding of Delta Manufacturing Company, which started as a parts and machining operation in the garage of Herbert Tautz, and quickly became a leader in the design and manufacture  of power tools and machines under the DELTA brand.

The Delta brand is of course known for the iconic Unisaw table saw launched in 1937, which changed the power tool industry by allowing beveled cuts to be made by tilting the blade arbor instead of the table.  This saw, the first 10 inch tilting arbor table saw had a cast iron top and moveable fence, and a blade guard with an opening on top that allowed a direct line of sight to the blade.  Today the Unisaw still reigns as the industry standard table saw for professionals and serious woodworkers. 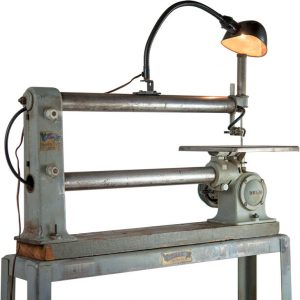 From the very beginning, Delta power tools have led the way with innovative and labor saving ideas. The first power tool launched by Delta was the patented “American Boy” scroll saw, introduced in 1921.

Engineering development and attention to innovative accessories helped Delta grow through the years.  Delta has been the industry leader in radial arm saws, table saws and power miter saws.  Other products like the Delta Midi-lathe, 14 inch drill press, band saw, planers and jointers have become coveted items for any workshop.  In 1995, Delta acquired rights to the Biesemeyer brand and its patented table saw fence, which quickly became a standard in high-end table saws throughout the industry.

Generations of skilled carpenters and builders have relied on the DELTA brand to deliver high quality dependable woodworking tools that have enabled unparalleled excellence, and made the lives of do-it-yourselfers and professionals alike easier and more productive.

In its early years, Delta became famous among hobbyists for the Deltagram, a simple how-to-do it woodworking newsletter.  Many years ahead of their time, Deltagram messages were the forerunners of the DIY home improvement and woodworking trend.   Later, Delta became a primary sponsor of the New Yankee Workshop.  Show host Norm Abrams became a well-known hero for many aspiring home improvement enthusiasts.

At the end of World War II, Delta was honored by Congress for its role as a provider of “the machine guns of production.”   Delta dedicated all production during the war to metal and woodworking machines to be used in manufacturing airplanes, tanks, and other war material.

In 2018, Delta introduced the Delta CRUZER® miter saws with the largest cross-cutting capacity in the industry, and a patented load arm support bracket for smooth cutting and easy storage.

Industry surveys show Delta is one of the most owned brands of stationary and benchtop tools in America with over 56% of shops having at least one Delta brand tool.

Today Delta Power Equipment products are available through Lowe’s, Home Depot, Menards, Amazon and other retailers of tools and equipment.