When Spelching Makes You Feel Good

Most of the time, we take measures to avoid spelching, but as Megan Fitzpatrick demonstrates, once in awhile, spelching can help

The Oxford English Dictionary cites 1605 as the earliest example of the word “spelch,” translated from the Scottish, to mean splinter. According to the OED, the word is obsolete – but it is not. As woodworkers know, it’s a more genteel way of saying “blow out the backside” – as in, “planing crossgrain will cause the wood to spelch on the far side of the cut.” (But “blow out the backside” will get you a few chuckles in a classroom setting.)

Most of the time, we take measures to avoid spelching. A chamfer on the far side of a board allows you to plane across the grain without worry of splintering as you exit the cut. If you’re using a shooting board on end grain, for example, flip the workpiece toward yourself and plane a few strokes on the corner, then flip it back over and start shooting. As long as you take the same number of plane strokes as on the far corner, you won’t spelch.

But once in awhile, spelching (like belching) can make you feel better. 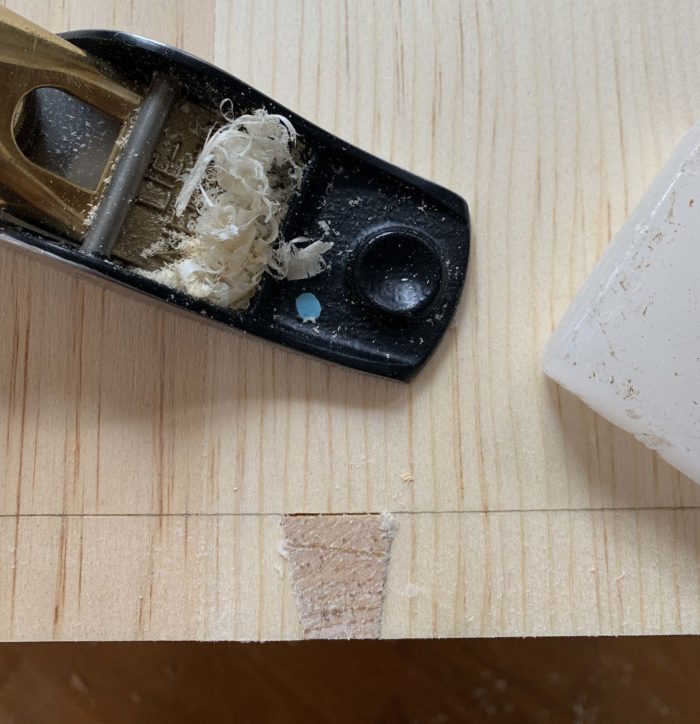 Take the open baseline in the dovetail above – that’s mine (oh, the shame!) from a chest build during a class last week. I’d like to say I did it on purpose to show how to fix it … but that would be a lie. Still, it did come in handy as a teaching moment.

Because the bottom of the pin is not touching the tailboard, it is unsupported end grain across the baseline. But the baseline isn’t too terribly far away, so planing crossgrain can break out the fibers only to that line, thus filling in the gap.

A swipe of paraffin across the end grain makes it easier to plane (as does moistening it with alcohol). Then I use hard downward pressure as I plane directly into the pin toward the baseline, lifting out of the cut as soon as the plane blade passes onto the tailboard – think of trying to scoop out a cut on that pin – that’s the motion. A few strokes, and I’ve intentionally spelched the back of the pin to fill in my egregious gap. Whew – now I feel better! 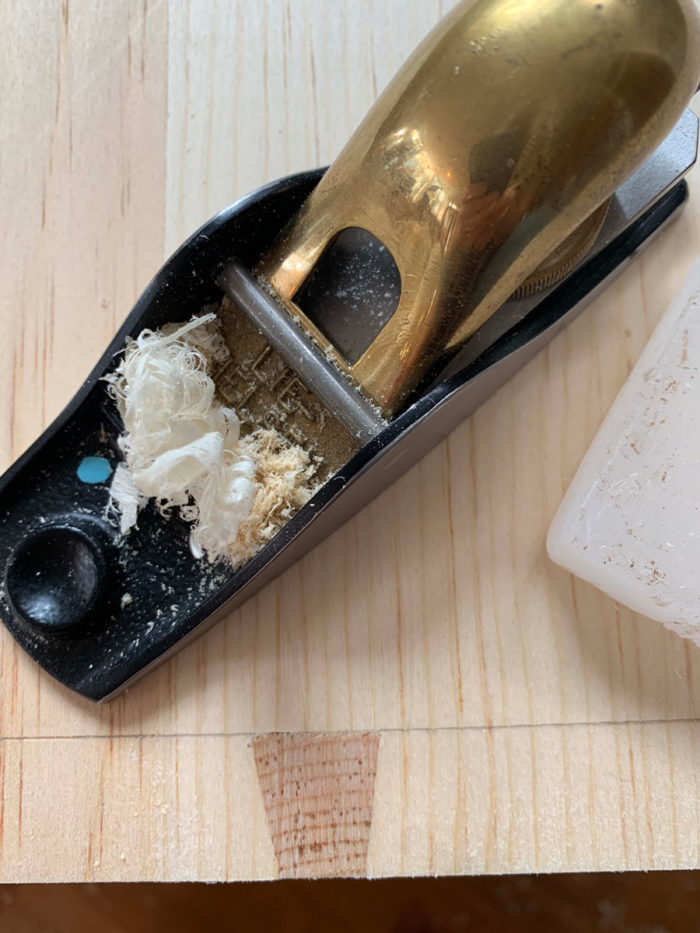 If you look closely – really closely – you can see the torn fibers at the pin’s back in the image above, but no one will ever notice on the finished project.

-Megan Fitzpatrick is the publisher at Rude Mechanicals Press and a peripatetic woodworking instructor and  freelance writer/editor. She lives in Cincinnati where she’s renovating a 1905 house, but can usually be found in the Lost Art Press shop in Covington, Ky.