It's rare, but sometimes a carving job requires a bucket truck

Several years ago a sculptor that I know asked me if I’d be interested in carving some poles for a museum garden. These were gondola poles from Italy that had deteriorated and needed to be copied. They were from 7 to 11 ft. long and 8 in. in diameter with a slight taper and there were more than a dozen of them. I gave an estimate and didn’t hear anything for a long while. We finally got the go-ahead, a friend with a tree company got me 20 oak logs, and on one 5° morning I took my chainsaw and the list of lengths and, like some Tokyo tuna merchant, tried to size up the frozen carcasses and choose the best ones. A log loader then picked them up and took them to my friend Tony in Saco, Maine, who has a turning mill. I was pretty terrified that Tony would take one look at them and say “no way!” I had warned him, but still the mass of these frozen monsters and the matter of moving them around was monumental. Tony worked his magic and turned the logs, tapering them to my specs. Back on the log loader they went and arrived at the shop.

With a bucket truck, we moved the poles into the shop through the window, rolling them onto benches. Each one weighed several hundred pounds, so thinking like an Egyptian was important—inclined planes and rollers! There was barely any room to walk around since we also had all the original poles. Each one was different, so we needed to copy them exactly. 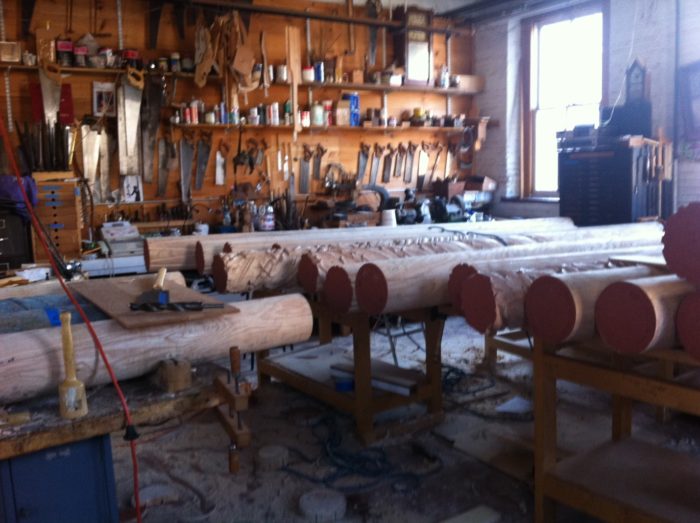 The poles had similar motifs of spirals and leaves. We wrapped paper strips around the poles to get the proper spirals and then drew the basic shapes onto the wood. Wooden handles were screwed onto the ends of the poles to spin them as we carved.

The tools we used were the biggest I had, along with some I had to track down. To cut the spirals I bought a giant Japanese saw and cut around the logs, bending the blade to follow the curve. For the modeling we used 8-30’s, 3-40’s and the biggest V-tools we could find. The mallets were equally huge, and we had to switch hands constantly to keep the fatigue distributed evenly! All the carving was mallet work, the oak being too hard, even when green, to allow push cuts.

One of the more challenging things to keep in mind on this job was that, unlike most of the furniture carving we did, this carving was meant to be seen from a distance and did not have to be fussed over. The original carving had been very bold and unrefined and making it “nicer” would not be time well spent. 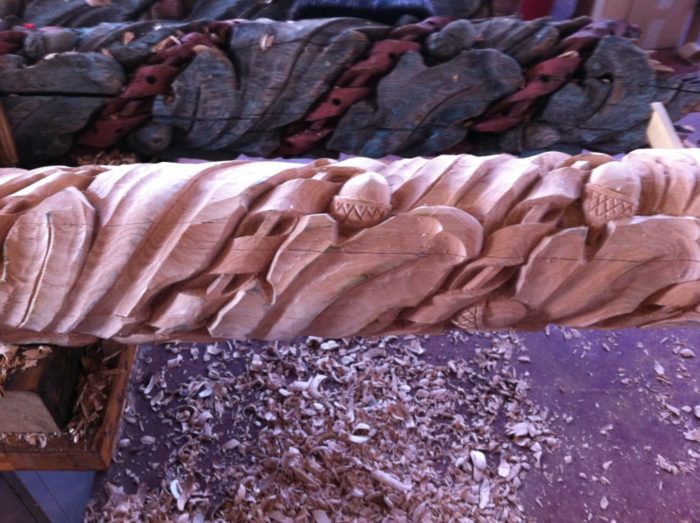 That’s not to say that they were simple. This image shows some of the more complex spirals and ribbons wound around central cores, with the original pole in the background. The most important thing to keep in mind in architectural work like this is that in doing the carving your goal is to create shadows, so we chopped the spaces between motifs as deep as we could in order to get the elements to pop out and be separate elements. 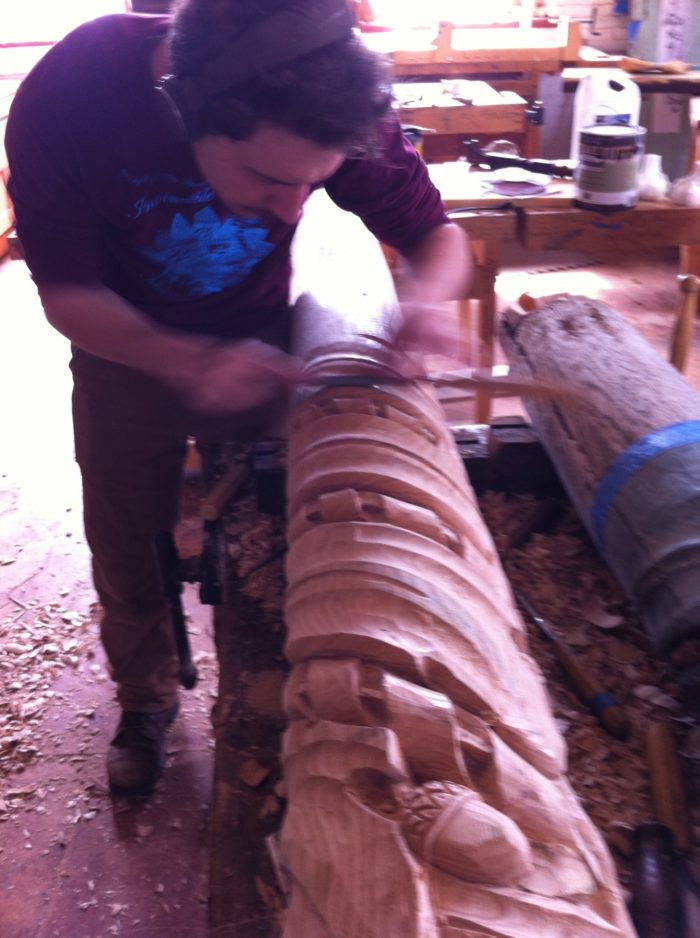 After three or four weeks of constant wrestling with our 300-lb. opponents, the poles were all carved. No more blisters, aching forearms and shoulders, or sore hands. The frozen logs I had cut up on that cold morning were now spirals of leaves and ribbons. This brings me back to the philosophy of why craft is fascinating and magical for me. It’s a simple combination of the brain, the hands, and the tools. With skill and vision the artist practices “artifice” to deceive others, that is, to make one material look like it’s something else. In this case, to make oak look like ribbons and leaves. We do it all the time, especially in carving. The carver makes wood look like flowers, like shells, like drapery, and only with a few tools and the ability to sense when it looks right. This is the ideal melding of vision and practice, the connection being the skill of the workman’s hand enabling the brain to turn what it imagines into something real. 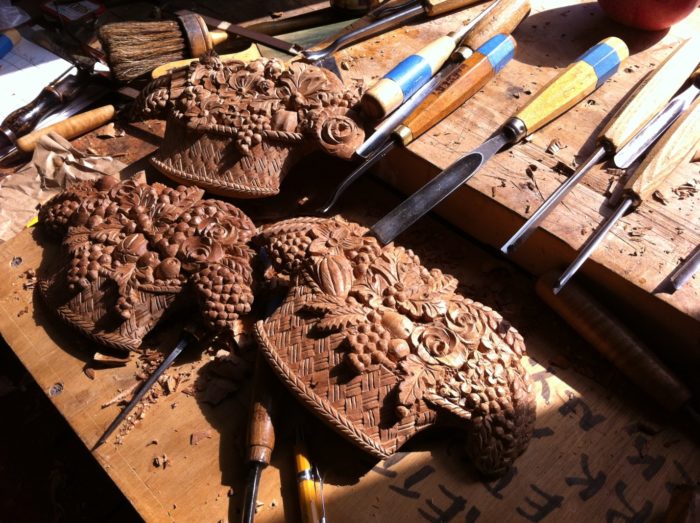