How to get a cutlist from your SketchUp model

A cutlist isn't that difficult to create by hand, but if you're modeling your projects in SketchUp, there's a far easier way

You’ve probably already discovered that SketchUp is a great tool for designing your project. You can sketch out your ideas to get a good feel for how they will look making it easy for you and your client to get on the same page with a design. Once you have the model drawn, though, what next? Well, after you’ve drawn the model, and have the visible details worked out, you can add the joinery and other bits to the model to create a plan to take to the shop. Typically I find that I don’t need a formal plan for myself, although it’s certainly possible to make one. I use SketchUp and LayOut to make the digital and printed plans for many of the projects featured in Fine Woodworking Magazine.  For my own use, a few images exported from the SketchUp file usually suffice. It is handy, though, to have a cutlist so I have the overall sizes of the parts at hand as well as a shopping list when I go to the store for parts.

Now, a cutlist isn’t that difficult to create by hand. I know a woodworker and SketchUp user who would draw his project and then sit down with the Tape Measure tool, paper, and pencil and make up his cutlist. There’s a better way, of course. When I showed him he was amazed.

There are a number of extensions for SketchUp that will create cutlists. I’ve tried a few of them and found they all do what they do quite well. Many of them seem like they are aimed more at the kitchen and bath cabinet makers. The one I prefer is simply called CutList. As with all of them, CutList generates the list based on the dimensions of the bounding boxes of the components and groups in your model. It does ignore ungrouped geometry so you need to consider that. I advocate using components for a long list of reasons. In regards to creating a cutlist, there are two primary benefits of components. First, you are prompted to name them as you create them. That makes it easier to know which part’s dimensions you’re looking at. If all the parts are named ‘Group’, it’s hard to know which is which. (You can go back and rename groups after creation if you wish but it takes extra steps.) Another benefit to components as related to the cutlist is that you can change the axes to align them to angled parts. You’ll see how that comes into play in the video.

Of course, you’ll want to have detailed your model and drawn it accurately. Since the cutlist shows the overall dimensions of the parts in your project, you’ll need to include details such as tenons and dovetails. Negative spaces such as mortises and the spaces between the dovetail pins don’t come into play with the cutlist so you can include them or not as you desire. Remember, this is a computer program and GIGO(garbage in, garbage out) applies. The more precisely you create your model, the more accurate your cutlist will be.

I used this model of a colonial stand up desk as an example in the video. As you can see in the X-ray view, all the wooden parts are fully detailed with tenons, dovetails, and so on. 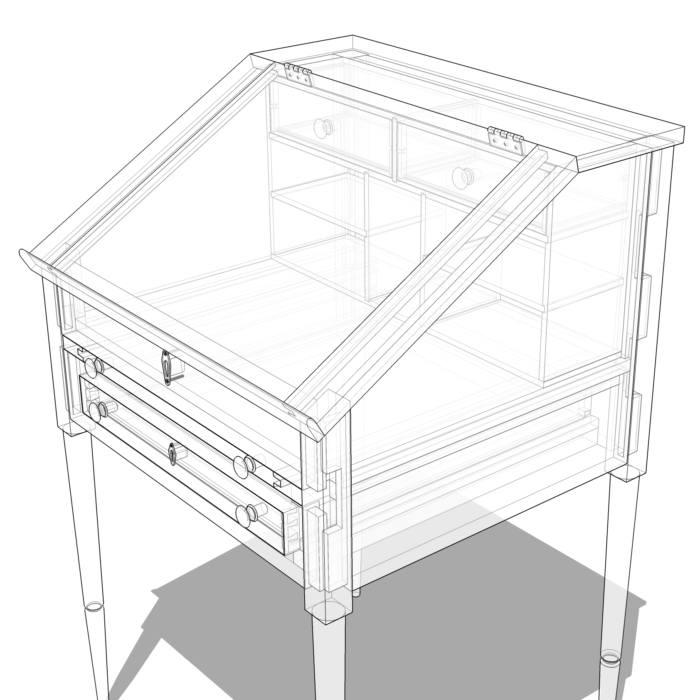 CutList was written by Steve Racz and is freely available in the Extension Warehouse. Access the Extension Warehouse directly from SketchUp and install it automatically. After you’ve installed it you’ll want to do a little bit of setup to customize it for your use. The first window of the user interface looks like this. There are sections for selecting the things you want to show in the output and determining how they look. The text boxes after ‘Part Words’ and ‘Sheet Material Words’ are for words you’ve used in your component definition names that help the extension sort the components into the right sections of the list. You can add words to these windows as I’ve done in the following image. If your components don’t include words from either of these lists, they are assumed to be solid wood. After you make any changes to the settings, you can save them so you don’t have to make those changes again. The question marks in the blue circles are help buttons. Click on the button and a window opens to give you some information about the settings in that line. 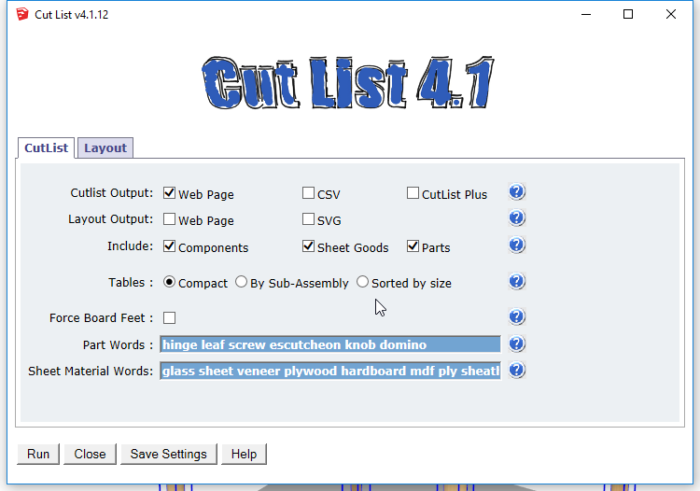 Under the Layout tab you’ll find more settings which are useful for determining how the extension deals with the solid wood and sheet material components in the model for the layout output. These settings have no impact on the cutlist, though. 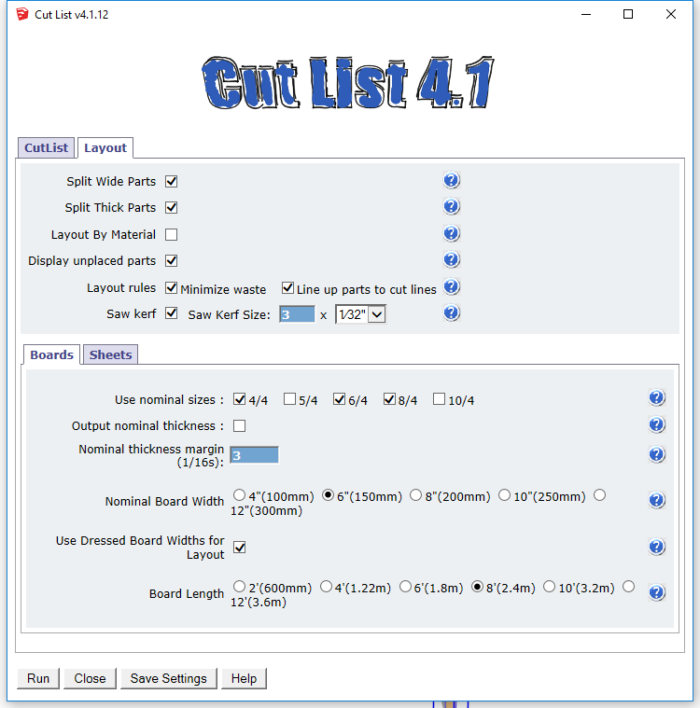 The first part of the layout looks like this: 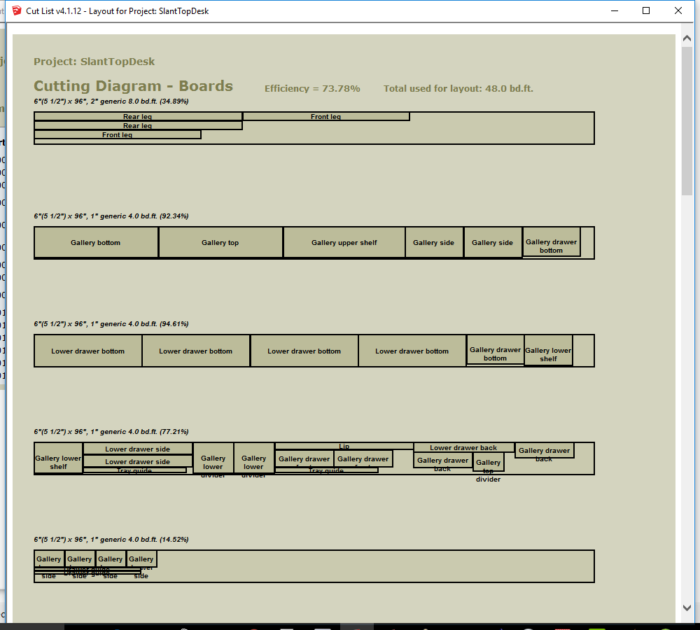 And the first part of the cutlist looks like this: 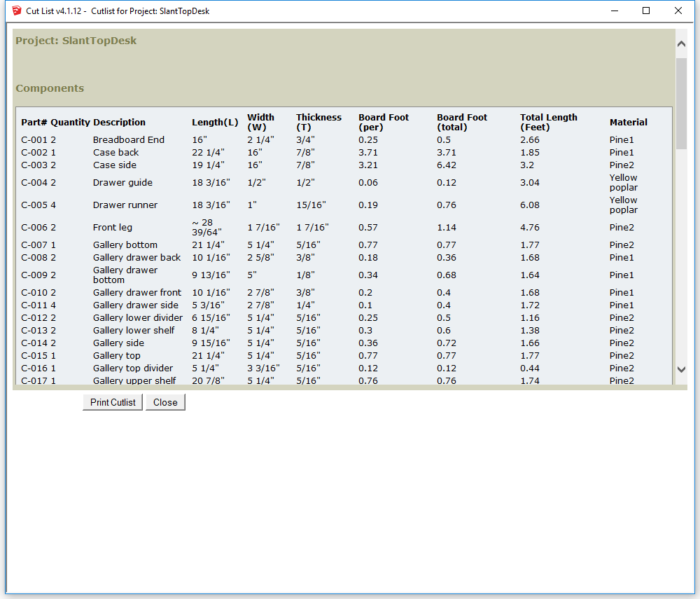 I also find the cutlist to be useful for identifying potential errors in the model. I find it best to set model precision as high as it will go for the units I’m using. When I’m working in Fractional units, I set Precision to 1/64 in. I wouldn’t ever intentionally draw parts to 64ths so I wouldn’t expect to see 64ths in my cutlist. If I do, that raises a red flag for me. As you can see in the screen shot of the cutlist, the front legs show as ~28-39/64″ long. Both the tilde and the 64 catch my attention. In this case, the top of the leg is cut to match the angle of the top so this dimension has a reasonable explanation. Using the 64th-in. precision helps to avoid round errors, too.

So take a look at the video. Hopefully you’ll get a better feel for how this useful extension can work for you.