The Faces of Marquetry

Traditionally, when woodworkers talk about marquetry it brings to mind the fans, shells, and other motifs—some plain, some fancy—used to embellish period furniture. Take it down to its most basic definition and marquetry is about making pictures out of veneer. Take it to another dimension entirely, and you get Rob Milam’s portraits.

Rob grew up in a woodworking home. His father, Jim Milam, is a period furniture maker under whose influence his son developed a deep love for wood and an understanding of what can be done with it. “My father has been an exceptional furniture maker nearly his entire life. He knows wood and his tools well, but his most valuable work trait is that he loves to learn, and he’s not satisfied if he’s not learning.”

Over the years, Rob has spent time as a homebuilder, remodeler, carpenter, and furniture maker. But it was when he discovered marquetry that he found his creative niche.

It started when he happened to see a photograph of a portrait in Silas Kopf’s book, A Marquetry Odyssey.  “My wheels started turning as soon as I saw it. I immediately began work on a portrait of my son, and as I worked out the design for that piece, I began to see that the human face would be a worthy subject to explore depth and light value. I was hooked, partly because it presented a challenge, and partly because it is a departure from the typical subject matter for marquetry compositions.”

“I look for (or shoot) a photo with a light quality that’s suitable for my purposes,” Rob says. “In most of my pieces, each variety of veneer is used to represent one light value. Any more than seven light values adds unnecessary detail and can even detract from the desired effect. Some of my favorite pieces are those that have only three or four veneers.” 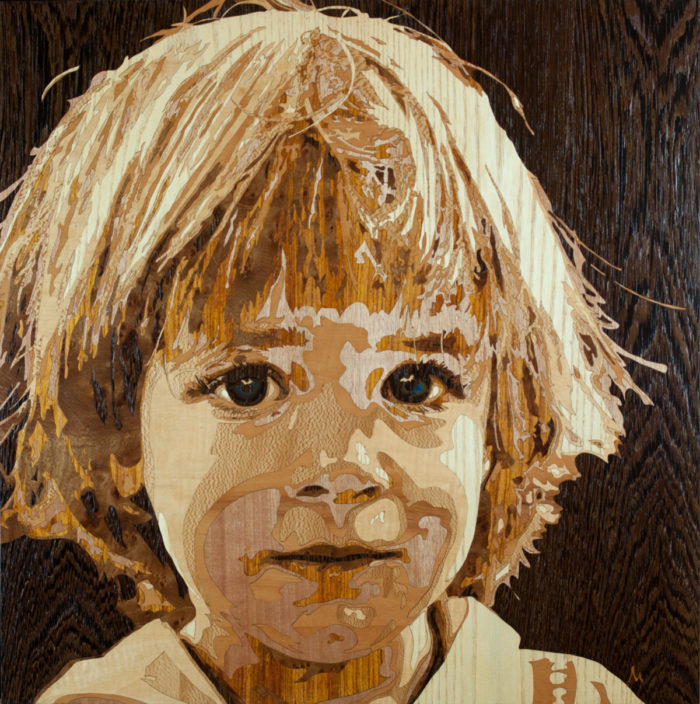 It’s painstaking work, but ultimately worth it. “It’s a thrill when the shellac goes on a piece of marquetry and the colors pop. The texture and color is unique in each piece of veneer, and the contrasts from one piece to the next are always thrilling to me as they reveal themselves.”

Typically, his portraits are small, no bigger than 20 in. in the longest dimension. Some are personal, of his children. Some are commissions. And sometimes this Georgia woodworker will create a marquetry picture simply because he sees a photo that speaks to him. On his website is one of Bobby Cox, the former manager of the Atlanta Braves, mouthing off when an umpire ejected him from the game. “I found that photo on the internet,” Rob says. 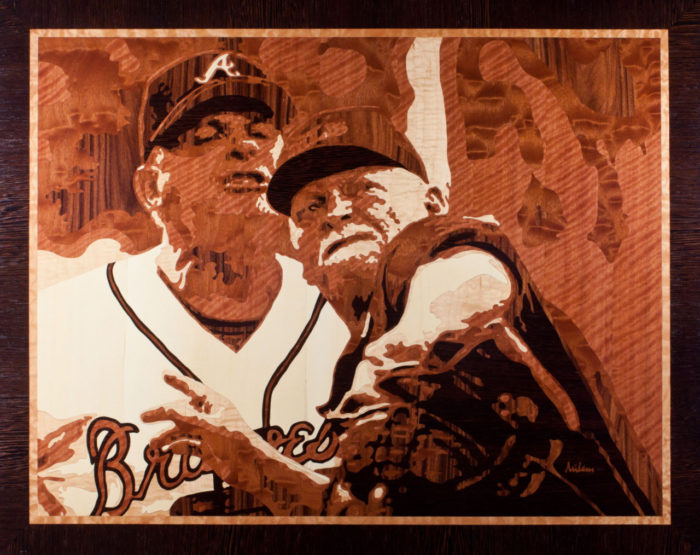 Currently Rob does his marquetry portraits in his “spare” time. Three children and a full-time job take a big bite out of that available time. But he’s not ruling out a full-time move to marquetry if the opportunity ever arises.

For more of Rob Milam’s work, check out his website.