Web producer’s note – I’m very excited to announce that we’ll be featuring a new blog by Roland Johnson, Talking Tools. Rollie is our go-to tool guru and we are really excited to have him writing more for the website. I’ve set up an email address ([email protected]) for you to send tool questions to. They’ll come to me and I’ll send the best questions onto Rollie. Currently we are thinking he’ll answer his favorite questions once a month. We’re gonna play it by ear for now. -Ben Strano

One drawback of being a tool junky is that I’m always dragging some old forgotten chuck of iron back to my shop. A few months ago a friend mentioned that his dad was disposing of his woodworking tools and wondered if I knew anything about radial arm saws and what they might be worth. His dad wanted $125 for one and thought maybe that was too much. A few questions determined that it was an early Fifties DeWalt 9-inch in little-used condition. I couldn’t pass up the chance to buy an early DeWalt, which in my estimation is the best of the breed, so now I have another chunk of ol’arn to add to my collection.

The saw was purchased new by my friend’s dad and was carefully used and well taken care of. The only weird modification was plywood glued to the original maple table, maybe a way of preserving the top? Thankfully it hadn’t been clamped tight when glued up and I could simply pry the junk off and clean up the glue. The original maple table is in very nice shape. The rest of the saw is virtually new and I really enjoyed sifting through all the original literature that came with the saw, pure Fifties stuff with lots of pegboard used in the projects! DeWalt even included plans for a “Modern Workbench” using the radial arm saw as it’s centerpiece. Yikes.

There’s a lot of controversy about the attributes of a radial arm saw and I’m a proponent of them. I’ve had a 10-inch version of this same vintage (and Futurama-green color) for nearly thirty years and wouldn’t be without it in my shop. There’s simply no better tool for accurately and cleanly crosscutting lumber. There, it’s in print, let the responses begin!

This little gem can crosscut 15 inches of 1-inch stock. If you are a tablesaw sled user who considers 15-inch crosscuts easy to achieve, try crosscutting the end of an 8-foot 10/4 oak plank, accurately, with your sled. It’s far easier to saw wide, thick or long stock when the stock doesn’t have to be moved across the blade. My 10-inch saw will also crosscut 3-inch thick hardwood with relative ease which can be a major challenge with most chop saws.
Radial arm saws have a reputation as being dangerous, overly-aggressive-cutting saws, but the real culprit isn’t the saw, it’s the blade. Radial arm saws require a negative hook angle blade, just like a chop saw. Standard positive hook angle blades simply cut too aggressively for a pull saw, and this saw was equipped with a 24-tooth standard blade – very aggressive – so a proper blade is the first step in getting it back to work. A little setup (squaring everything) and some needed maintenance (lubrication) and I’ll put the little beauty to work.

One important tip when considering putting a radial arm saw in your shop: buy an early saw, one built before the late Sixties or early Seventies. The early saws are built like brick outhouses with lots of cast-iron and hold their settings even when heavily used. The old DeWalts were so well built and so easy to setup it’s easy to see why the Original Saw company makes dead-ringer copies. So the next time you’re trapped in Craigslist check out listings for radial arm saws, you might find a worthy addition to your shop. 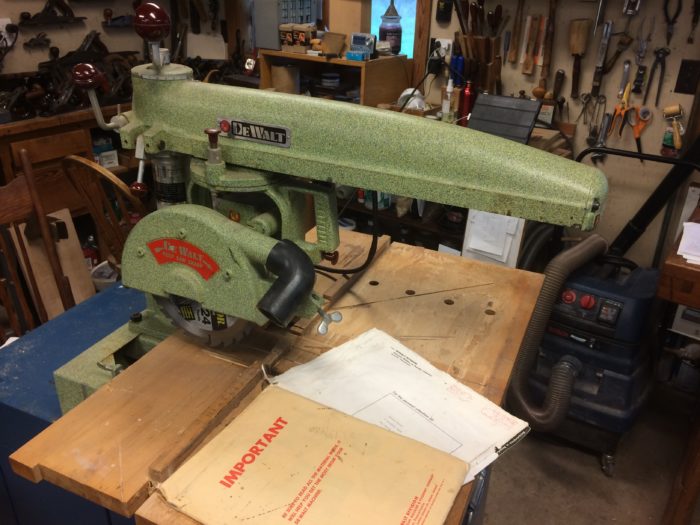