Surface Prep Shootout: We Have a Winner!

The first-ever FineWoodworking.com live streaming event, a Surface Prep Shootout between Editor Asa Christiana and Art Director Mike Pekovich was a great success and one we intend to improve upon as we bring you future live events. Click here to watch the replays.

Asa and Mike went head-to-head in a battle between random orbit sanders and good old fashioned hand planes to see who would finish first and whose work would be more aesthetically pleasing. In the end, Mike’s hand planes won the day in both time and aesthetics. 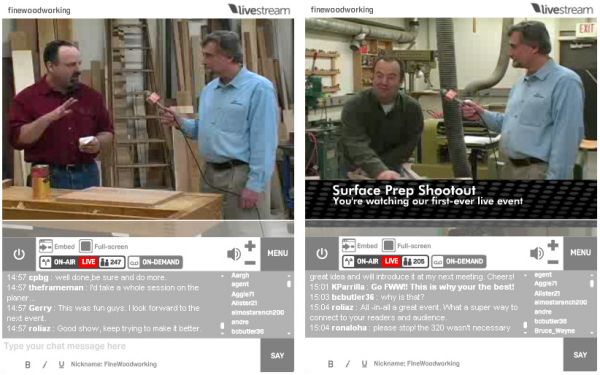 Nearly two-dozen Fine Woodworking readers were invited to the event, which took place at the FWW shop here in Newtown, CT. Throughout the course of the event, we took questions from our live and online audience, and had a little fun at the expense of Mike and Asa. We also gave away door prizes — two Lie-Nielsen Toolworks block planes, a Bosch Airsweep vacuum, and two Fine Woodworking DVD archives. Judging by the response we received from viewers, I think it’s safe to say we’ll be doing this again, real soon.

Cheers to all who participated and a special thanks to both Mike and Asa for being such good sports. Look for the archived coverage from this event at FineWoodworking.com in the near future.

Anatole Burkin (L) compares tabletops with a Fine Woodworking reader at the end of the event.