Creating a Project Plan in SketchUp

Recently I completed a SketchUp model to go along with Tim Rousseau’s Frame and Panel Cabinet shown in the current Video Workshop. The goal of the model was to create the images for the plan that goes along with the project. I thought I’d show you some of how I went about creating this model. 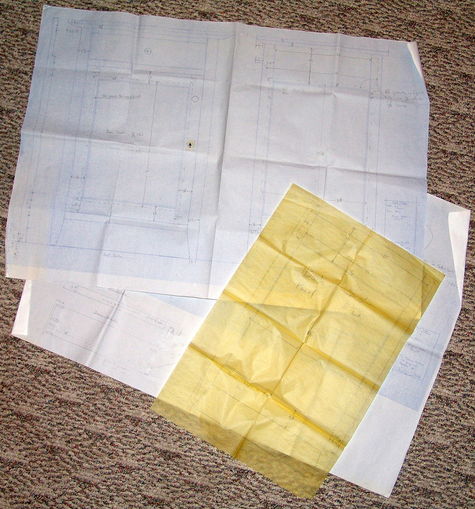 Tim sent along some hand drawn plans. These were drawn full size which made it easy for me to determine dimensions that weren’t specifically called out. Working frrom these, I started by drawing a leg and making it a component. I usually start with the front left leg placing its bottom outside corner on the origin. Then I copy (Ctrl+Move) the leg and the Flip the copy to make the front right leg. Both legs are selected and copied to the back and those copies are flipped. A couple of guidelines helped to define where the legs need to be. The drawing shows the completed legswith their joinery but in this early stage of drawing the model, I don’t bother with that stuff. I just get the basic parts drawn in place. At this point all four legs are still instances of the same component. 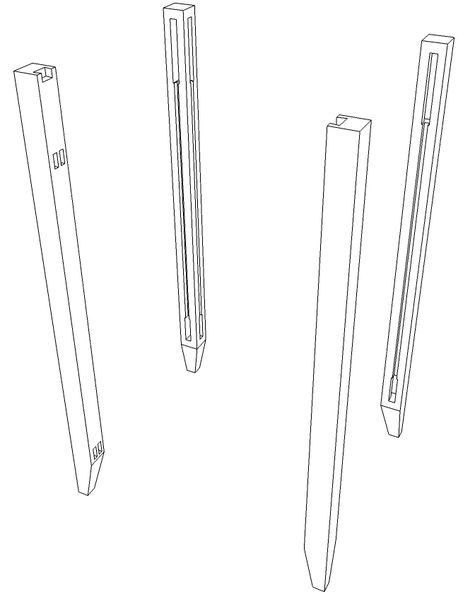 Once all of the parts are drawn in place, I’ll draw in the joinery. Since the mortises and grooves for the side rails and panels will be the same on all of the legs, I’ll draw them first and then select the two rear legs and make them unique to separate them from the front legs. then the joinery for the back rails, panel and the blades can be drawn in.

After getting the basic leg component drawn, copied and positioned, I draw in the rails and blades. These start out as simple boxes drawn in place between the legs. I know some users like to draw the parts away from the model and then move them into place. I prefer to work in place since it makes it simple to get the dimensions right. If the legs are drawn and placed correctly, I don’t need to know how long to draw the rails. I just make them to fit. 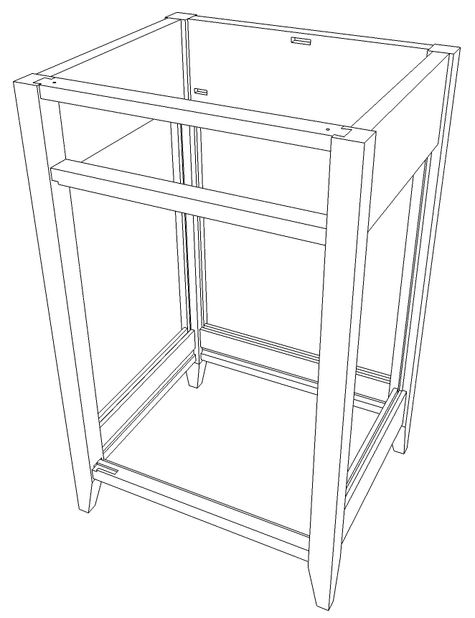 The panels and bottom are drawn in to fit in the openings. 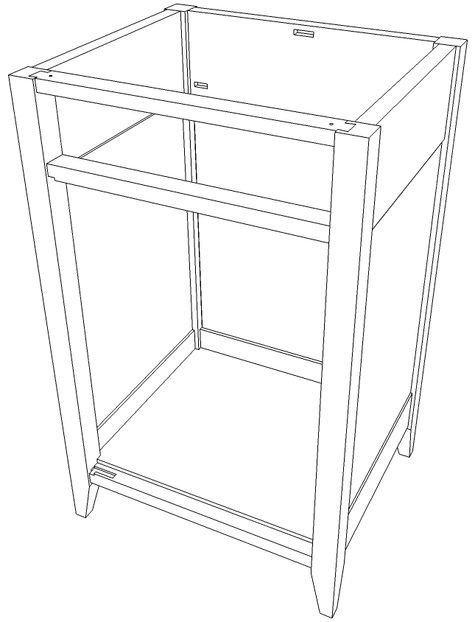 The door is drawn in its opening along with the drawer runners and kickers. 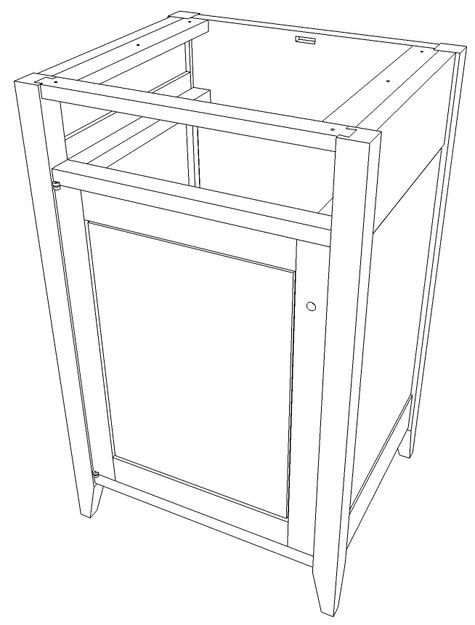 I also added the drawer front and then drew the rest of the parts for the drawer. Every part as it is drawn is made into a component. If there is more than one part or there are left and right counterparts, these are made by copying and if needed, flipping or mirroring them. 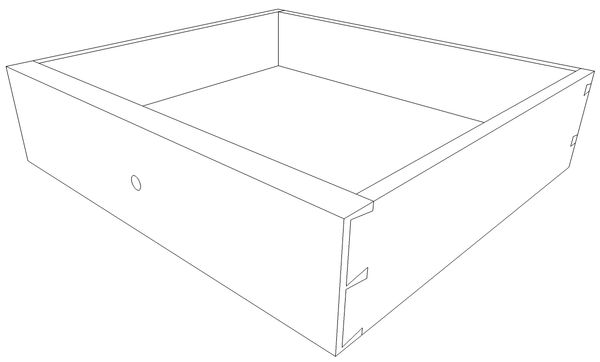 After all of the parts are drawn into place, I start editing the components to add the joinery. I use a collection of techniques while doing this. For example, before editing the drawer components, I copy the entire drawer out away from the model. I work on this copy and since the original components are linked to this copy, all of my editing appears in the drawer in place. For this cabinet, I used that copy of the drawer to make an exploded view which appears in a scene of its own.

The tenons on the rails and blades in this cabinet are long enough to conflict with each other. This is a detail that might not be easily discovered if the components are copied away from the model so for those, I temporarily hid the leg and drew the tenons on the adjoining rails. After the tenons were drawn, I trimmed them to eliminate the overlap. This is very much the way Tim trimmed the tenons on the real thing.

I just keep plugging away adding the joinery details throughout the model. Once that is complete I move on to making scenes that show the various details. The idea is that these scenes can be exported as images to be used in the plan. I make copies of the cabinet model or some of its components as needed. Some of these copies are used to create the exploded views as well as dimensioned part views. 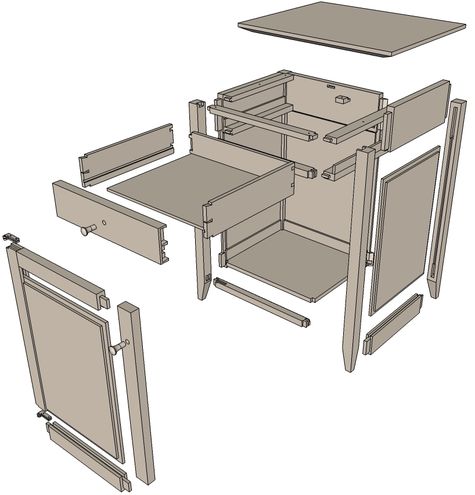 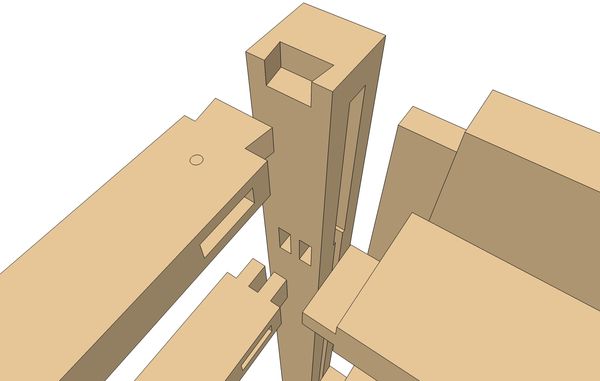 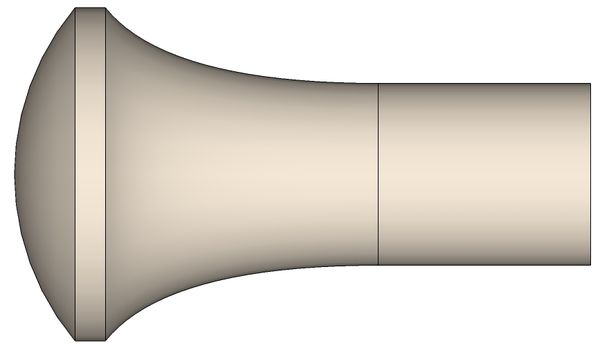 Some scenes are displayed with the camera set to Parallel Projection rather than Perspective. The elevation view below was created by making a copy of the entire cabinet and rotating that copy to show the side. 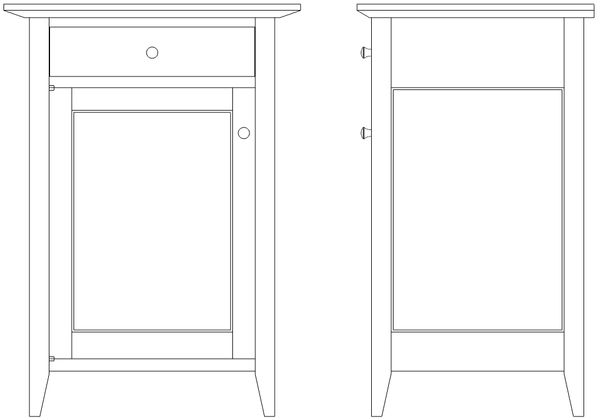 These scenes could be placed directly into Layout, which is included with the pro version of SketchUp. The plan for this project was created in a different application. This could be done without the pro version of SketchUp. For this model I ended up with 29 scenes. If I was drawing this for my own use, I wouldn’t make that many scenes.When working with scenes I disable Scene Transitions so I don’t have to wait for them when switching between scenes.

After all the scenes are created and dimensions and text are added, the overall view of the model looks like a mess. Normally though there’d be no need to see it like this. 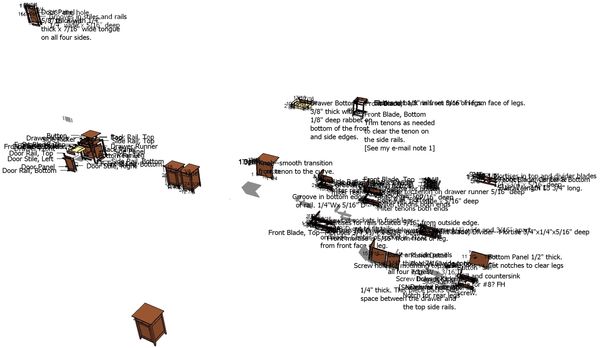 Some folks like to make separate SketchUp files for each of the views they need but I find it too difficult to keep track of what I’ve done and what I have yet to do. I find it much easier to jump from scene to scene as needed. There is an added benefit to doing this. That is changes made in the model are reflected throughout. For example the mortises for the hinges weren’t drawn in until rather late in the process because I didn’t know exactly which hinges were used. Once I got that information, I was able to draw the hinges and put them in place on the original of the model. Then I edited the blades to add the mortises. This was carried through automatically to all copies of the blade components in the model. That wouldn’t happen if there were separate SketchUp files for each part.

It all looks like a lot of work but just as creating a piece of furniture in shop a methodical approach helps to make it manageable. If you take the time to work through a project this way in SketchUp, there’ll be no surprises when you get into the shop. You should have a pretty good idea of what you need to do and in what order. This will improve your efficiency and reduce waste.