High school woodworking teacher takes home $5,000 in tools for his essay on why he deserves a new shop

Ask Tim Carroll about the joys of teaching woodshop in an inner-city high school and he will talk about kids who run to class with excitement, about kids who say woodshop is the reason they are graduating.

He will recall a visit to a student’s home in which he found a newly completed class project–an Adirondack chair–in an unlikely place of pride.

“It’s a chair that’s designed to go out in the yard,” Carroll says.  “Well, I visit them at their house, and their Adirondack chair is sitting right in the living room.” The entire living room, in fact, was given over to displaying their woodworking projects–a chess board, a clock, and other pieces.

“It’s an important thing to these kids,” Carroll says, “and it’s nice to know that you’re making such an impact in their lives.” 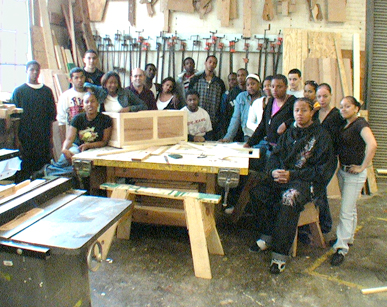 Head of the class. Tim Carroll poses with students at the Harrisburg Career and Technology Academy where he teaches woodworking and cabinetry.

In 18 years at the Harrisburg Career and Technology Academy in Harrisburg, Penn., Carroll has had many such moments. But the biggest thrill for him and his students recently was learning in late March that Carroll had won Fine Woodworking’s win-a-shop contest. His winning essay–chosen from among 9,000 entries–made clear his passion for woodworking and for passing on his knowledge to others. It also made clear that he was a good candidate for a shop full of new tools.

“One of the hazards of my job is my own tools, materials, and money has a way of ending up at school for my students to use,” he wrote in the essay.

About 70 percent of Carroll’s students are minorities and many are from low-income homes. The dropout rate is high, but many of those who graduate go on to college or to a nearby technical school. Others land jobs with local builders or cabinetmakers right after graduation, he says. During the summer, Carroll runs a free woodworking program for disadvantaged kids. He also takes his students on an annual summer trip that includes stops such as Colonial Williamsburg to further their woodworking education.

After graduating from high school, Carroll worked 12 years at an architectural millwork firm, advancing from beginning cabinetmaker to shop foreman before entering the classroom in the late 1980s.

He says he was “totally shocked” to be named the contest winner: “I can’t believe that I was chosen. It feels like Christmas with all these tools coming.” 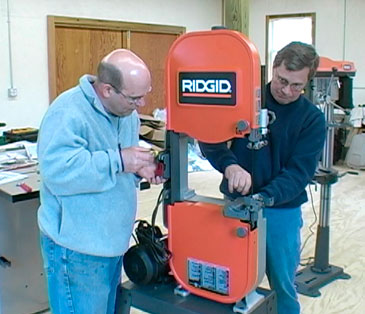 Carroll says the tools will be put to good use in his retirement. While he doesn’t plan to retire anytime soon, he has begun getting ready. He and his son have built a 24×32 foot shop building on his property which he said in his essay he is ready to begin filling with tools.

“I can use the tools at school, but when I retire I won’t have that anymore,” he said. “To set this up is like a dream.”

Steve Scott is an associate editor with Fine Woodworking.