Compression Chuck for the Lathe

I turn a lot of small candle holders that have a 1-1/2-in. recess in the top for a glass insert. After turning and parting off the holder, I like to reverse-chuck the piece and turn the bottom. The two traditional ways to reverse-chuck a workpiece are either to turn a wooden jam chuck or to use a metal four-jaw chuck. Both ways have problems. The jam chuck must be painstakingly turned to just the right size to work properly. The metal jaws of the four-jaw chuck will invariably mar the already-sanded workpiece.

This compression chuck for reverse chucking solves those problems. It is an adaptation of a plumbing test plug, a rubber expanding device commonly found in hardware stores. Test plugs come in several sizes from 1-1/2 in. dia. to 4 in. dia. to fit the inside of common plumbing pipes. You can also use a rubber expansion plug (also called a freeze plug) found in automotive-parts stores in a number of smaller sizes.

To make this chuck, screw a wooden scrap to a faceplate. Turn the scrap round and square off the face. Center-bore the wooden faceplate to fit the bolt in the test plug. Now remove the bolt from the test plug and extend its length by welding on a threaded rod. The lengthened bolt should extend entirely through the lathe headstock and out the other side by a couple of inches. On the outboard side, add a wooden cone and a threaded knob to tighten the chuck.

One word of advice: Be careful not to overtighten the chuck with a thin-walled piece, such as a goblet, because the pressure may split the wood. 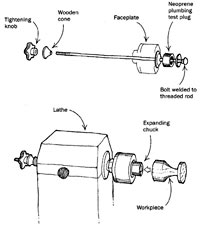