The Story of His Latest Cabinet

Originally published in November 1998. James Krenov loves to read, and his conversation is laced with quotations from writers, artists and craftsmen. Much of Krenov’s best reading, however, takes place, not with a book in his hand, but a plank. A close look at a piece of his furniture reveals his gift for reading the possibilities in a piece of wood. You see that the wood and the cabinet are beautifully blended: Only this particular plank could have made this piece. When we paid him a visit in late June, we found him working on a new cabinet-on-stand in teak, spalted maple and olive. He was nearly finished with the cabinet and was contemplating the stand. We asked him to explain how he’d chosen the wood for the piece and how the wood had affected the design. (Photo right: Seth Janofsky)

I started with only a vague idea of what I was going to make. I knew it was going to be a small cabinet and that it would be made of a wood not too light—and not very dark. Medium, like this teak. I did a little sketch (see below), more of a doodle than a drawing. The sketch just gives me a line on a map—I can follow it, but I still have to take a look at what’s on either side of the road. 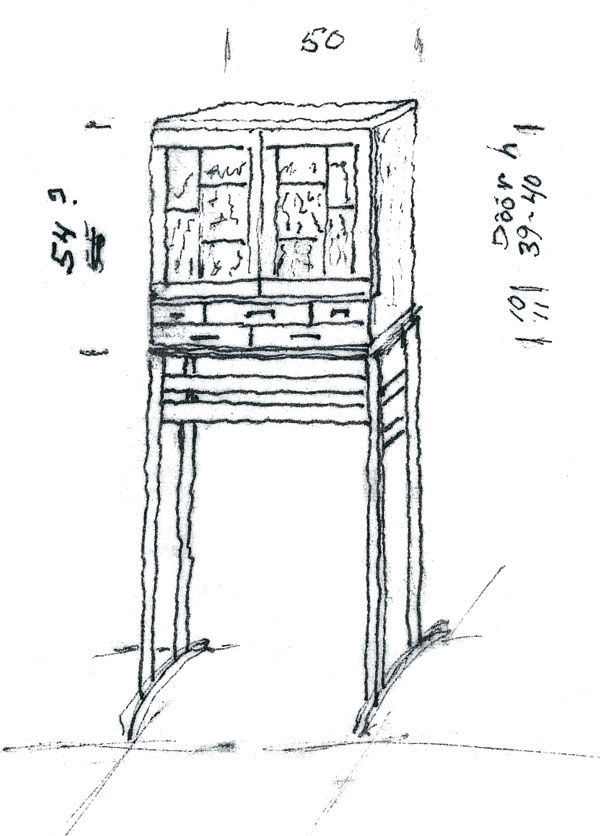 From there, I went to the wood room and picked and poked my way to a sense of confusion, irritation. I looked through the wood I had in my bench room, but I didn’t find what I wanted. I had some teak that was very dark brown and extremely straight lined. Teak like that seemed too good to be true—it didn’t excite me. Then, back in the wood room, I noticed a small, crooked, sawn-up log of teak lying partly hidden on the floor. We’d had it for several years, and nobody seemed to want it. It was no more than 5 ft. long and had been sawn into 8/4 planks. I scratched it a little bit and discovered it was rather a lively teak. It had nice color and a lot of motion in it. Once I found that log, I was off and running—it really gives me energy when the wood helps me with what I hope to do. But I have to take care. If I turn to one plank instead of another to start a cabinet, it can be the difference between night and day. Or maybe just night. …

I sawed some of the teak into veneer and made up parts of the carcase with it, using pleasantly beige European cherry for the inside. Some people like to use high-contrast wood inside a cabinet to make it a surprise when you open the doors. I prefer a soft transition. There’s a lot of movement in the cherry; it has rhythm and ripples in it. But it’s not wild.

When I was working on the sides of the cabinet, it became apparent that something different from what I had anticipated was going on.

I was making a perfectly rectilinear cabinet, but here the grain was bending forward at the bottom: The crook in the log of teak was now visible as a pleasing but definite curve in the grain of the veneer. When I saw that the side of the cabinet created a forward curve, I decided to change the stand to one with front legs that swept forward (see the sketch below). 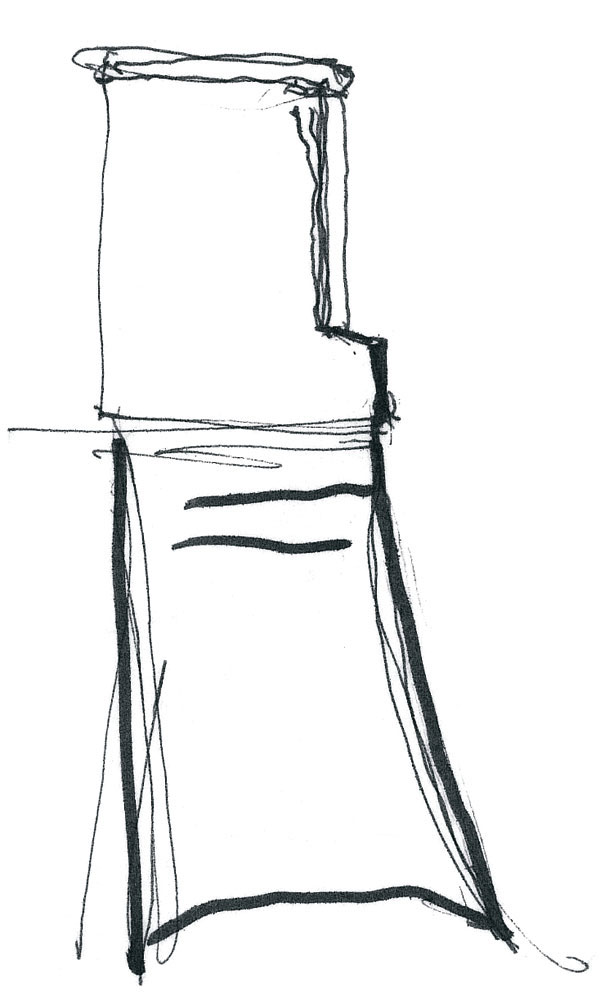 Making this change is an example of observing what’s happening with the wood as you work. But while you sometimes let the wood guide you, you shouldn’t let it dictate. You have to refer to the wood without abandoning your intentions. There has to be a cooperation, a partnership between the two. The idea is to follow, but be careful.

It’s a matter of getting acquainted with all of the properties of each wood you choose to work—a wood’s colors; its hardness or lack of hardness; whether its grain is ornery or not. It’s a very personal thing, and not everyone pays such close attention. But if you do, you are more in harmony with the wood and the work. And the results seem to flow from this harmony, even though it is connected with periods of stress and doubt. In the long run, knowing about these things will help a person.

Making the drawers was dicey. I made them from one short, thick, lively piece of olive, and I had a knife at my throat the whole time, knowing I didn’t have extra wood with the same pattern, or anywhere near it, so there was no way I could replace a drawer—if I spoil one, there goes the whole facade. The olive wasn’t long enough to give me all of the drawers with the grain continuous from side to side. But it was thick. So I made end-to-end bookmatches. The challenge was to piece these busy elements together without creating chaos. I may not have achieved quiet, but I think I avoided chaos.

The drawer sides, backs and bottoms are made of olive ash. It’s a subdued tan color that goes well with both the olive and the teak. It looks much better than if I had used a high-contrast wood like maple. The olive ash just melted together with the other woods.

By the time I cut the door panels, I had made most of the cabinet. But again, I knew what I wanted—sort of. My friend Brian had given me two small pieces of spalted maple as a present, saying, “Make something with these someday.” I like that. We have these little exchanges of wood going on. People share pieces of wood, and they become a story. The piece I used for this cabinet was 3 ft. long and about 8 in. wide. Part of it had crumbled, and only about a foot and a half was usable.

With spalted wood, the pattern often changes dramatically in ways you can’t predict from one slice to the next. Just a bandsaw kerf away you sometimes find the pattern very different. That was the case with these panels. If you open the door and compare the inside with the outside, you’ll see they are quite different. I had originally planned to set tiny pieces of ebony as straight lines dividing the door panels (see first sketch above). But when I saw the pattern of spalting on the panels, I thought, “There it is; don’t mess with it.”

I should mention that earlier I tried a different set of panels. I had a piece of spalted maple of my own that I sawed up, with spalting in a very intricate pattern, like spiderwebs. The landscape they made was wonderful. But when I saw those panels next to the olive of the drawers, the panels were too pink (see the left photo below). There was no other pink in the cabinet—the rest of the wood went toward yellows rather than toward reds.

So I settled for the board my friend had given me. The composition may not be as strong, but the color is better. Once I get finish on them, the greenish cast will fade, and they will be much more mauve. I think it will be a nice complement to the olive in the drawers and to the teak. I still like the original panels, though. I’ll just have to build another cabinet for them someday. … Maybe. …

Later in the summer, we heard that the cabinet was finished, and we asked Krenov how the rest of the process of making it had gone.

When you were here, I hadn’t decided on the pulls, although I was thinking about wrought iron, some kind of Japanese-ish drop pulls. I contacted John Burt, a cabinetmaker and blacksmith, and he made these for me. They are in three sizes to suit the smaller, intermediate and larger drawers. John also made the handles for the doors. I placed them a little above the middle of the door because there was already considerable visual weight down at the drawers with all their pulls.

When it came to making the stand, after I had abandoned the original sketch and gone for the forward-sweeping front legs, everything was rather simple. There was a little play with the grain. I used the natural curve in the grain for the front legs, and I tried to get some of the less curved, almost straight-grained wood for the back legs, which are themselves straight. On the stand’s front rail, you can see an upward curve to the grain. If you turned that upside down, it would look tired; with this gentle, upward curve, it lifts rather pleasantly.

So the stand was easy to make, but for a while I had some doubt as to the dimensions. I thought maybe the stand was a trifle heavy for the rest of the cabinet, and perhaps some will think so. But now, after coming back to see it at different times, sneaking up on it and turning on the lights, after asking my wife, Britta, to take a look with me and hearing from other people who have looked at it, I see the cabinet itself is not so delicate. In fact, it has a certain miniature sturdiness. So perhaps the stand and the cabinet are friends after all and get along rather well.

To finish things off, I just have to say that I’m pleased with the cabinet, and people seem to like it. And I’m very happy to admit that, in making it—whether it’s for the last time or not—I have once more been very lucky.