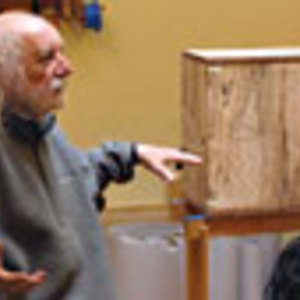 James Krenov (1920-2009) was one of the best-known names in woodworking with his signature designs and his 21-plus-year legacy running the prestigious furniture program at the College of the Redwoods’ in Fort Bragg, Calif. His work is currently displayed in museums in Sweden, Norway, Japan, and the United States, and he wrote five books on woodworking, including The Cabinetmakers Notebook and The Fine Art of Cabinetmaking.

Mostly through his school, but also through his furniture, Krenov has inspired a generation of furniture makers who regard materials and craftsmanship with the highest praise. In a March 2003 interview with Fine Woodworking, Krenov speculated on the influence he has had on woodworkers throughout his career: “It’s not that I had a message that was outstanding or unique or anything like that. I just expressed the feelings that a great number of people had … ‘Live the life that you want to live. Don’t be unhappy in your work.”

Krenov retired from the College of the Redwoods in 2002 after more than twenty years of instruction and inspiration. He continued to build custom cabinets from his home shop in Northern California until his failing eyesight prevented him. After that Krenov continued with his passion for wood building his classic wooden hand planes.