How often have you needed to plane a large surface such as a tabletop? The usual choices are to use a very expensive 2-ft. to 3-ft. planer or to use hand-controlled tools such as a plane or belt sander. Having faced this problem, I looked for a router accessory that would hold a router at a set elevation while allowing it to travel over a large area. I couldn’t find such a device for sale anywhere, so I built an inexpensive one.

The router rail is fairly easy to build, and there are several designs possible. The principle is simple: A carriage just large enough to hold the router runs on rollers in two rails that form the long sides of a narrow frame, thus providing lateral motion. The frame itself has rollers at its narrow ends, and these ride in two rails that form the sides of a larger frame, thus providing longitudinal movement. Bars attached to end plates support the stock to be planed, and elevation wheels raise and lower the larger frame and the stock-support bars independently of one another. The dimensions of my system are 72 in. by 48 in. by 12 in., excluding the sawhorses.

The materials can be obtained from a well-stocked hardware store or by scrounging in the scrap barrels of a metal distributor. The carriage is made from a piece of aluminum plate and has two rollers on each side. The rollers on my system are from a conveyor belt that happened to be living in a friend’s junk-shop. A wiper, made from felt cut to the shape of the inside of the track, should be mounted next to each roller so that the track is kept clean ahead of the rollers. The rails can be made of garage-door track. Stiffeners (angle iron or plywood gussets) may be necessary on rails over 5 ft. long if the system feels bouncy. The ends of the large rail frame and the stock-support bars can be made of aluminum or wood. The stock-support bars should hold the work without flexing; the stock is clamped to these bars. The pieces are fastened together with corner brackets, bolts, and hex nuts or wing nuts, as shown in the drawing. 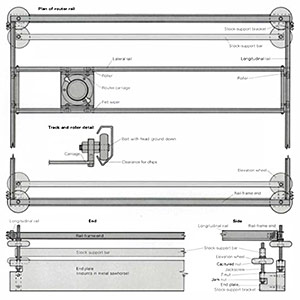 Eight elevation wheels allow for independent adjustment of the rail system and the stock-support bars. I use a 4-ft . level to level the rails first, then the stock. The elevation wheels can easily be turned from a piece of wood or composite board with a nut captured in the center, and the jackscrews on which the wheels run are threaded rod. To capture the nut I first counterbore a hole in the wheel blank the diameter of the distance across the nut’s flats. Then I bore a clearance hole through the wheel for the threaded rod and use a bolt with a washer to draw the nut into the counterbore. The nut will cut its way into the wood and remain there when the bolt is removed.

Bolts with wing nuts hold the larger rail frame together. Removing these breaks down the system into the end plate assemblies, including the stock-support bars and elevation screws, the two longitudinal rails, and the lateral rail assembly, including the carriage. The disassembled parts can be hung on a wall for storage.

The router rail is particularly well suited for planing end-grain panels, like butcher block. Although the largest bit I feel safe with in a router is a 1-1/4-in . carbide-tipped straight-faced bit, still I can surface a 6-ft. by 3-ft. tabletop in less than a half hour, including setup time, and that’s significantly faster than I can do it by hand. Someday I’ll build a heavy-duty version rigid enough to support a 2-hp motor that will take a 3-in. diameter cutterhead.

The router rail has possibilities for other routing operations besides planing. Stops can be placed on the long rails to allow the router to move only crossways. The carriage can be clamped, allowing only lengthwise movement, or stops can be placed to allow only a certain length of cut, for making stopped dadoes and slots. A sharp individual can get pretty inventive with one of these gadgets — so get to work. 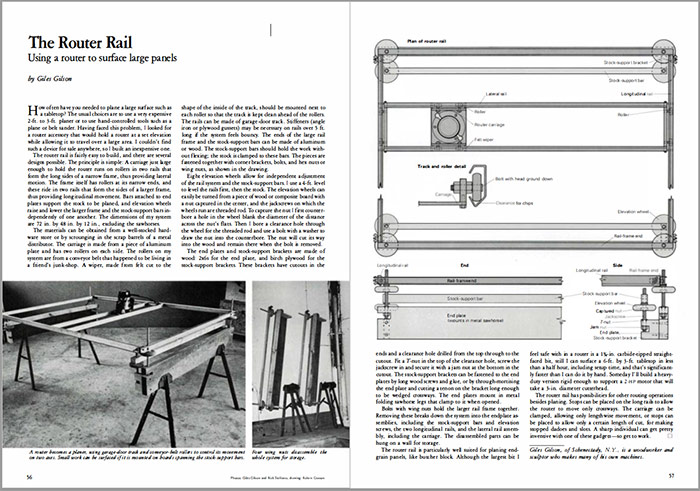 Giles Gilson, of Schenectady, N.Y., is a woodworker and sculptor who makes many of his own machines.