Pins or Tails First: a Case for Each

Tage Frid and Christian Becksvoort tell how and why they cut dovetails the way they do, in this classic from the Fine Woodworking archive.

Synopsis: Vincent Laurence of Fine Woodworking introduces different points of view on cutting through dovetails. He asked Tage Frid and Christian Becksvoort, who have 99 years of cutting dovetails between them, to tell how and why they cut dovetails the way they do. Cutting pins first makes sense to Frid, who says it’s easier to hold the pin board in place to mark the tails than it is to hold the tail board against the end of what will be the pin board. Becksvoort finds it more efficient to cut the tails first, taping two boards together. Both offer more explanation on why they prefer their methods, and dozens of detailed photographs follow their work, step by step.

I was trying to explain to someone years ago why I’d just taken a job as an apprentice woodworker after spending four years and $70,000 on an English degree. Suddenly, in the midst of my explanation, his eyes lit up. “You mean,” he asked, You’re going to learn how to make dovetails?” He understood.

There’s good reason for the lofty esteem accorded the dovetail joint. Even without glue, dovetails are very strong. And they’ve proven their reliability for well over three millennia. Much of their contemporary allure, though, has nothing to do with strength or reliability. Finely executed, hand-cut dovetails are a testament to the skill of the craftsman who made them.

It takes practice to cut a dovetail joint well, but the joinery is relatively simple. Two pieces of wood are connected with interlocking pins and tails. There are only two methods of cutting dovetails by hand: cutting the pins first and cutting the tails, or pin sockets, first. Both methods work. But advocates of each method tend to be passionate about the advantages of their approach and the obvious flaws in the other. With this in mind, we asked two of our contributing editors, a pair of woodworkers with 99 years of cutting dovetails between them, to tell us how and why they cut dovetails the way they do. Their methods and tools may differ, but both cut flawless dovetails that will last generations. Here’s what they had to say. 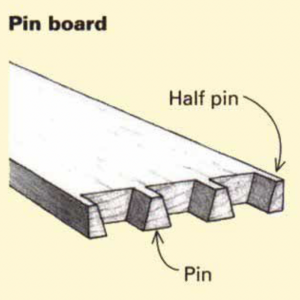 I started my apprenticeship in 1928, at the age of 13. At first, I drove a push cart, delivering furniture around the city of Copenhagen. After a year, I told the master to whom I was apprenticed, “All right, I know how to drive the push cart. I’d like a bench now, so I can learn some woodworking.” Within a month, I was cutting dovetails. I’ve cut quite a few since then and have taught hundreds of students.

Cutting the dovetail pins first makes sense. It’s easier to hold the pin board in place to mark the tails than it is to hold the tail board against the end of what will be the pin board. Also, the walls of the pins provide a good surface for the awl as you mark the tails. And by marking from the inside of the joint, the angle of the pins will cause the awl to cut cleanly across the face grain of the tail board rather than follow the grain.

Another reason to cut the pins first is that when accuracy counts—when cutting the second half of the joint to fit the first—you’re cutting to a line on the face grain, not on the end grain. It’s easy to split this line right down the middle (but be sure the sawkerf is on the waste side of the line). 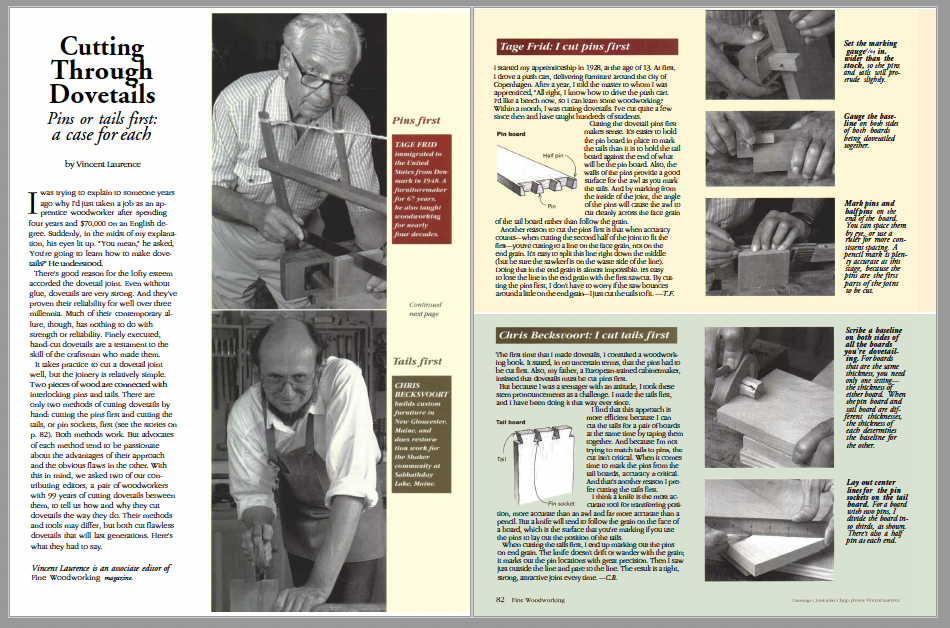 Sign up for eletters today and get the latest techniques and how-to from Fine Woodworking, plus special offers.
This site is protected by reCAPTCHA and the Google Privacy Policy and Terms of Service apply.
See all newsletters
View FREE Project
when you enter your email address below.
View PDF
X
X
Previous: Hand-Cut Dovetails Next: Don’t Fear the Hand-Cut Dovetail