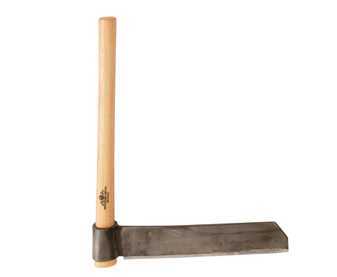 A low angle block plane has a bed of 12 degrees and a typical blade bevel (up) of 25 degrees, giving a cutting angle of 37 degrees. Such low cutting angles are good for end grain but also for softer woods like pine (if a thin shaving is taken).

Would a plane with an even lower cutting angle be (a) worth configuring as such and (b) likely to perform even better on end grain and soft woods?

Paring chisels are often set with a 20 degree cutting angle, as this allows fine shaving of all kinds of woods. Paring chisels, though, have to be used with care and delicacy, as that 20 degree edge is vulnerable to shocks or other large forces.

A plane blade of 20 degrees is going to be equally vulnerable – more so in a typical planing action that involves a lot of push or speed. But what if it was given a back bevel of, say, 10 degrees, making the pointy edge 30 degrees yet (as the blade is bevel up) still keeping the cutting angle low (thirty two degrees for a main upward-facing bevel of 20 degrees on a plane bed of 12 degrees). Would that provide an improved performance on end grain and/or softwood?

The 10 degree back bevel is smaller than the plane bed angle of 12 degrees, so the blade edge would still be the lowest part of the projecting blade…….

I’ve never heard of or seen this done. There might be a reason for that of course.  🙂  Wot U fink?