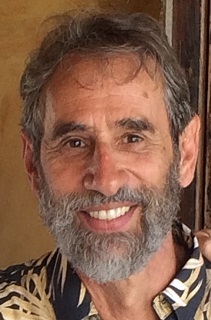 Following up on previous forum advice I bought two Bessey strap clamps to reduce my anxiety when gluing up boxes. Previously I had been using regular clamps and pawls, but they were a pain to use and adjust. They also so cluttered the assembly that I had a hard time getting to the inside to clean up any squeeze out.

I tried the new Bessey clamps today; first on a “note pad” size box and then on a second, taller box. The shorter of the two could accommodate the angle fittings supplied with the strap clamp and I only needed one strap to cinch it up well. It was little tricky to get the plastic corners in the exactly the right place, but much easier than dealing with multiple standard clamps.

The second box was a different story. The the material was thicker, the plastic corners would not clear the tabs of the finger joints, so I reverted to using some pawls I had lying around. When I tried to tighten the strap, the pawls kept being pulled out of position, mostly in towards the center of each side. I cut some scrap plywood and slipped it in between the pawls, and that helped greatly in keeping the pawls in control and away from the outside corners of the glued up box. The second box height needed two straps, but with the pawl & spacer arrangement, it all worked well. Again, much easier than multiple clamps…

BUT !…there must be a better way to deal using the strap clamp on small boxes ! Does anyone have tips of tricks to suggest ? 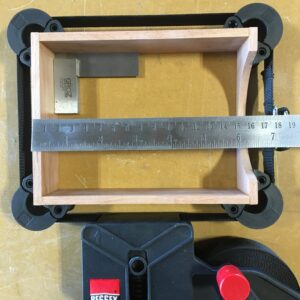 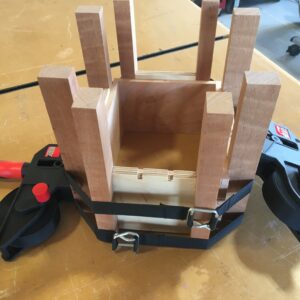