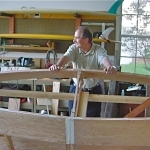 I have been reading about this new A2 steel used in newer, higher end hand planes.  Does anyone know where I can find replacement blades of this type for my older stanley planes?