Hello, After following gdblake’s thread on his beautiful panel plane with the Brese iron, I thought perhaps these two miter planes designed for the shooting board would be of some interest. I decided that the biggest objection to the wooden miter plane, in my mind, was the problem of low overall mass, so for these two planes, I bored 1″ diameter holes down the length of the body in front and back, and filled them with lead shot. I also used bronze or brass lever caps, and in this case, the LV iron for the low angle jack. You’ll note the two different styles of lever cap–one from a Norris style rough casting supplied by St. James Bay, and the other a simple Stanley-like single bolt pivot made from rectangular brass bar stock. That system has the virtue of simplicity of construction, and eliminates the tedious fitting of the lever cap to the iron after completion of the plane–I think I’ll try that method on future planes. They are both roughly the same size, 12″x2 3/8″x3″; 40 degree bed angle, bevel down; 4 lbs. 12 oz each. I’m not sure how apparent the Brese influence is, but I took inspiration from his lovely infill miter plane. These are relatively new, but they seem to work like a charm–has anyone had experince over time with the structural consequences of hollowing and loading wooden with shot to increase overall mass? I don’t really anticipate problems, but this is my first attempt at that kind of solution. 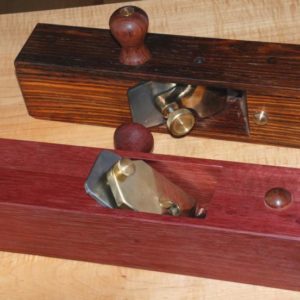