Making a Cyclone from a Drum Dust Collector 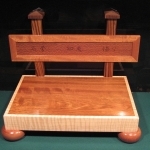 I have a DELTA drum type dust collector that I bought in the early to mid 90’s. As soon as I hooked it up I hated the dust bag that hung on the side. It took up a lot of room when inflated, reduced the airflow and did a very poor job keeping the fine dust from re-entering the workshop. So I removed the bag and vented it to the outside using a standard dryer vent and some metallic flexible duct. I then used DWV PVC and routed that around the perimeter of the shop and installed branches with gate valves for all the tools. It has worked like a charm ever since.

Except for one LITTLE problem…View Image

The airflow through the system was unencumbered by the dust bag and it blew through so fast almost all the dust blew directly outside. When “the-one-who-mows-the-lawn” complained about the piles of sawdust accumulating outside, I would go out there with a rake and make it “disappear”. I was working then and didn’t really do a whole lot of woodworking so the occasional piles weren’t really a big issue, especially if I got out there and raked them away before the lawn got mowed. View Image Then came retirement and the chips really started to fly. And that pile was becoming harder and harder to make disappear.

I remembered seeing an article in a magazine, I was thinking from the mid 90’s, that showed how to make a cyclone dust collector out of a drum dust collector. I rummaged through my collection of old magazines and found the 1997 WOOD Magazine that had the article, along with the (partially) full size cutting template perfectly intact. That came in very handy when making the inlet cuts on a 6″ piece of duct as well as the cut on the main cylinder.

The instructions said to use 30ga roof flashing. It’s pretty flimsy but I figured they must have tested it and found no problems. The 6″ duct I had, that’s been sitting in my garage for 15+ years, was pretty heavy duty and forming it so it didn’t distort the roof flashing took some work. I sealed all the joints with duct seal and caulk.

I used a garbage can to hold the unit in place so I wouldn’t crush the cone. The garbage can used to hold scrap wood – that’s what’s on the floor in the background. View Image

I used biscuits in all the joints. Most of the material I had in stock and I ended up using MDF for the back, that’s why I decided on biscuits and glue rather than screws like the instructions showed. I also made the sides shallower because I wanted access to the back in case I needed to get back there to screw the frame to the wall. I ended up making cleats for mounting. The metal piece on top in the above picture is the bottom of the fan/motor unit.

I painted the wood black and used blue painter’s tape for the accent lines. The color of the tape was so close to DELTA blue and it was so easy to apply, I couldn’t resist. I was going to dress it up with a “DELTA” logo on the cylinder but I figured I made it so why not use my woodworking logo and modify it a bit to go with the DELTA logo? View Image

I used 6″ duct to connect to the existing 4″ DWV PVC and taped the joints with metallic fiber tape. Then I grounded the ducts to the collector.

When it came time to test it, I decided to vacuum out the dust from my shop vac. I use that a lot when sanding so I knew there would be a lot of fine dust in it. As soon as I turned it on the cylinder drum collapsed! Yes. The sheet metal was too thin! I took a band of heavier metal and riveted it around the circumference. That seemed to hold but I can still see a small section pull in right next to the 6″ inlet. Maybe I’ll add another metal band there later.

As for what ended up outside, I’m happy to report almost nothing but some very fine dust. This thing really works! And it seems has better suction than before. But if you decide to make one for yourself, use heavier gauge sheet metal. I also found the template they provided for the three sections used to form the cone weren’t quite right either. So when making the cone, make it longer than you need and trim it to fit.

On the downside, I’ll have to empty this thing now!