JustOneMoreTool | Posted in Power Tools and Machinery on October 6, 2020 11:46pm

Can’t figure out what’s wrong with my JET JWBS-14DXPRO bandsaw. Bought it new several years ago but it has been lightly used or in storage for most of that time. Finally got a proper shop set up and I just noticed this problem:

With the blade tension 100% released, the slide bracket lowers until it hits the cutout in the inner wheel guard. The pointed tip of the jack screw never makes contact with the upper frame casting. The slide bracket, hinge, spring, jack screw, etc. all look to be in perfect condition.

I thought perhaps the guard was mounted on slotted holes and could be adjusted downward, but that’s not the case. I could make adjustments to the (factory-set) position of the stop collar on the jack screw to cause the slide bracket to sit higher, but I hesitate to monkey with factory config until I understand more. I expect this would throw off the blade tension at a minimum, and besides that, the wheels are already 31” on center. I would expect there to be a good 1/8” to 1/4” gap between the slide bracket and the guard cutout, but if the slide bracket was raised up that much, I doubt I could get the blade mounted even with the tension at zero. As it is, with tension released, it’s a little snug to get a 105” blade on and off the tires.

Elsewhere online, someone told me the had a similar issue with a Delta bandsaw, and solved it by hitting the guard with a bit of die grinder. That just doesn’t seem like the right solution to me.

I have to wonder if this was a manufacturing defect that I never encountered due to its ultra-low use all this time. Like maybe JET shipped a few saws with the guard mixed up with a different model? Or maybe I’m just missing something. Anyone else run into this sort of thing?

If someone else has a 14DXPRO, could you post some detail pics for comparison? 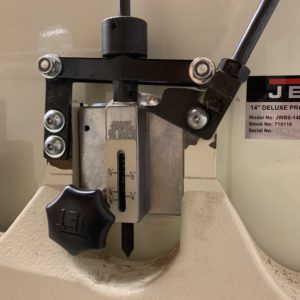 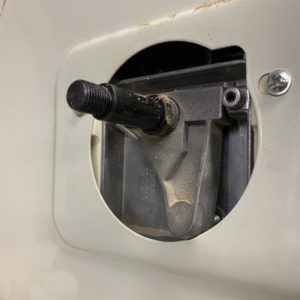