I am a hobbyist retiree working to put together a workshop in the basement of my condominium building.  Total floor space is around 400 sq. ft.  The condo is a former hospital and I am working in one of the former operating rooms.

I wrote to the Forum last month asking for advice on dust collection in a small shop like this.  The feedback was very helpful and included several specific recommendations of systems that others had used.  I realize now that a lot of folks are turning out great work in a small space like this.

I purchased the Oneida Super Cell, which I recently received, assembled, and put into service.  I took advantage of a short promotion that knocked 10% off the price.  Still expensive, but the build is high quality and the product is made in USA.

I somehow missed the memo in Oneida’s marketing material that the unit was intended to be mounted on a wall.  That wouldn’t work for my equipment layout so I built a simple cart on wheels (picture attached).  Oneida sells a cart for this purpose but it seems expensive for what it is.

I have begun using the system with a Saw Stop cabinet saw.  Very pleased with the Super Cell’s performance.  Noise almost identical to the large Shop Vac I had been using and less than the table saw.  Remote control is a nice feature.

I’m using the Saw Stop’s auxiliary overarm dust collector that also feeds into the Super Cell.  It does a nice job of collecting the sawdust at the blade.  This requires that the blade guard be down, so a tradeoff on visibility of the workpiece.

Thanks again for so much good advice and recommendations from Forum members.  My next ask will be about bandsaws.  But that will have to wait until the workshop account is replenished after being emptied to pay for the Super Cell. 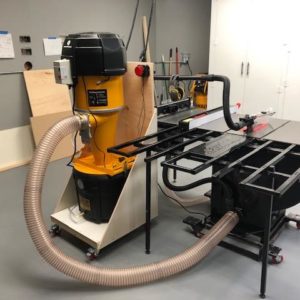